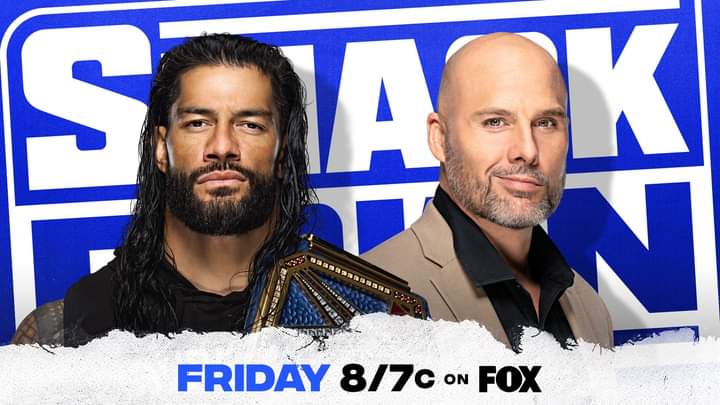 Tonight Smackdown is presented by PROGRESSIVE and it will kick off at 7/8 on Fox. On tonight’s SmackDown show;

Daniel Bryan music kicks off and he makes his way to the ring and met Sami Zayn on his way handcuffed to the ringside barricade and protesting about being robbed. Bryan talked about the coming Royal Rumble pay-per-view match and also added that it is a match that has always been keeping him alive even though it is made up of a lot of challenges. He said being a royal rumble winner will catapult you to the main event of WrestleMania and he can’t wait to be the winner of the coming Royal Rumble match.

Cesaro music interrupted Bryan speech and Cesaro made it clear that he will win the Royal Rumble match and that Bryan will never make it to WrestleMania. Daniel Bryan became angry with this statement and challenged Cesaro to a match but Cesaro replied by saying he was tired of proving himself a weak to Bryan weekly and he would rather accept an open challenge from anyone at the locker room.

Dough Ziggler music plays and he came to challenge Cesaro. He said he wants to win the Royal Rumble, go to the Main Event of Wrestlemania and get paid.

The match kicks off and Daniel Bryan is at the comment section watching them. Ziggler was entangling himself to Cesaro at first to dominate the match but Cesaro resisted him, swing him in a rotating direction and eventually delivered his finisher on him for the 3 count.
Cesaro Def Dough Ziggler via pinfall

Shasha Banks music plays and she makes her way to the ring.
Back from the commercial break, Carmela accompany Reginald to the ring and she was sitting at the comments section to watch the match.

The match kicks off and Reginald presented a rose flower to Sasha banks and asked her to peek him on the chin but instead Shasha tried to hit him on the face and he blocked it. Shasha tried to attack him on several occasions but he was constantly dodging it and frustrating her. The brawl continues and Sasha banks started dominating the match untill she delivers the bank statement on the poor guy for the summission.
Shasha Banks def. Reginald via summission

Biggie Vs Apollo Crew for the Intercontinental Championship

Biggie delivers a belly-to-belly attack to Apollo crew at the beginning of the match. Crew fired up and gave multiple kicks and German suplex to Biggie. Both wrestlers are fired up and not backing down.

Apollo delivered a drop-kick to biggie from the apron just to pin him but the match ended in chaos as Sami Zayn unlocked himself from the ringside barricade to ruin the match.
Bigie retains the Intercontinental Championship

Barley Vs Bianca Belair for the obstacle course challenge

Michael cole kicks off the show and introduces both female wrestlers. When he wanted to give the rules of the match, Barley grabed the mic from him and announce the rules herself. Barley kicks off the challenge by lifting up a 400 pounds tire, climbing walls, lifting Chad Gables and throwing a ball into the basketball net.

The match started and corbin was dominating the match and decimating Dominic Mysterio with several attacks.

Dominic tried to fired up to dominate the match but Corbin resisted him, delivered his finisher and pin him for the 3 counts.
Baron Corbin Def Dominic Mysterio

Adam Pearce was already in the ring waiting for Paul Heyman to come in to start the match. Paul Heyman music plays and he makes his way to the ringside barricade and fell to the ground on his way into the ring. Heyman sitting down outside the ring beside the barricade declared that he would need a replacement.
Roman reigns music kicks off and he walked directly into the ring. The Big Dog (Roman Reigns) delivered a massive superman punch on Adam Pearce and Pearce rolled out of the ring. Roman reigns became more angry when Pearce hit him on the face and Reings continued to inflict more punishment on him, driving him through the barricade and attacking him.

Kevin Owens came to Adam Pierce rescue and attacked Roman Reigns from behind. Owens was successfully able to beat down Reigns and put him through the announce table as the show ended in chaos.