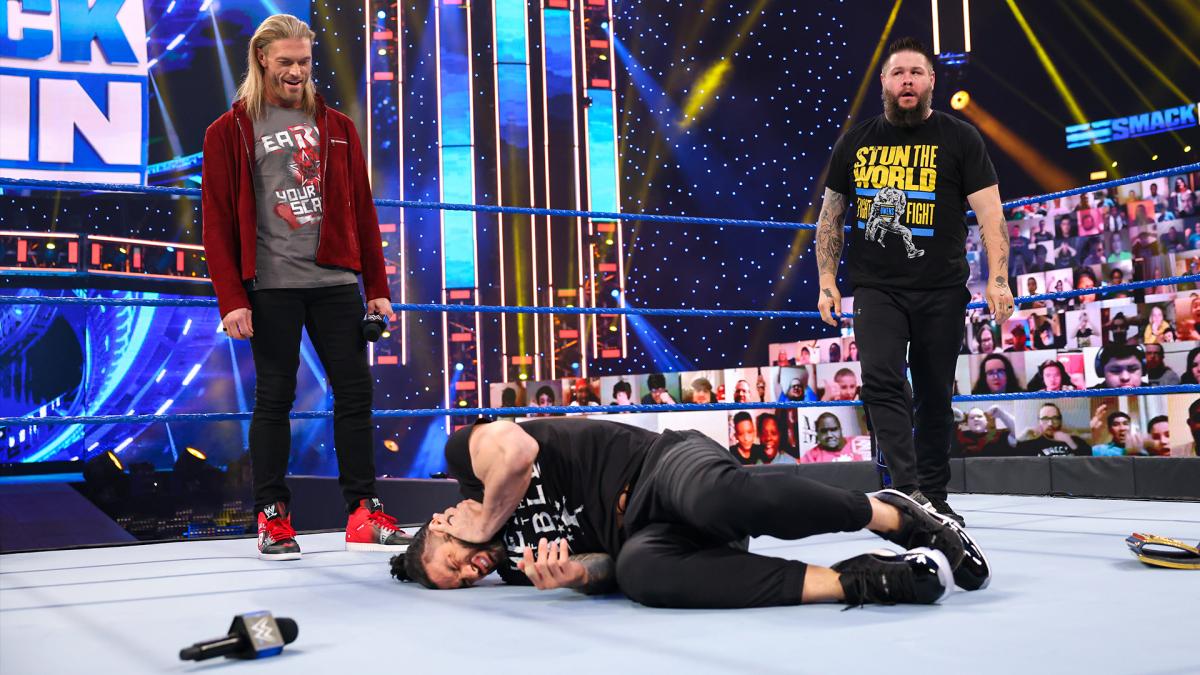 Tonight is the first SmackDown after Royal Rumble and it will be kicking off at 8/7c live on Fox inside the WWE thunderdome.

Roman Reigns kicked off the show and was accompanied into the ring by his cousin Jey Usos and his advocate Paul Heyman. He talked about his victory at Royal Rumble and claimed that he stood by his words after defeating Kevin Owens in the last man standing match to retain his tittle. Roman Reigns said that he is no longer afraid of the past and is going to be focusing on the future, he asked Paul who the future is and Paul said it is “Edge”.

Reigns said winning the Royal Rumble match will give you an automatic ticket to the main event of WrestleMania and he is fully ready for Edge to come for his title at WrestleMania. He ridiculed Edge appearance at NXT and said he should have come to SmackDown and challenged him instead. Roman Reigns openly challenged Edge to come for his title and waited for him to show up and accept the challenge but Edge never showed up. He, however, completed his speech by saying that he wants edge response before SmackDown ends tonight.

Dominik music plays and he was accompanied by his dad Rey Mysterio. He was viciously attacked alongside with his dad by Baron Corbin at the entrance as the show goes on commercial break.

Back from commercial break, the match begins and Dominik delivered multiple drop-kick to Corbin but Corbin was able to resist him and take control of the match. Baron Corbin continued to punish Dominic with multiple attacks, driving his knee into the jaw of Dominik and continued to dish out painful punishment on him. The match continues and Dominik got fired up and started fighting back, dragging Corbin out of the ring and driving him through the announce table.

The referee starts the count out and when Corbin was about to enter into the ring, Mysterio held him by the leg and this was a big opportunity for Dominick as he launched a kick on Corbin, draged him into the ring and delivered a massive splash right into the mid section of Corbin to secure the win.

The match begins and both wrestlers were building up momentum. Bryan took Cesaro out of the ring, tope rope and high dive him. He dragged Cesaro into the ring, top rope again and delivered a drop-kick on him.

Cesaro sustained a small cut on the head and started bleeding as the match continues. Cesaro started taking control of the match, he back-breaked Bryan and swinged him in a rotating direction to disorient him and finally locked Bryan with his summision move to pick the win.

Backstage, Bianca Blair was interviewed and she talked about her victory as the winner of the 2021 Women’s Royal Rumble Match. She said she was excited being the winner and making her parents proud. She was asked if she would face Raw or SmackDown Women’s Champion at WrestleMania and she responded by saying that she needed to take her time to make her choice as this would be the biggest decision of her career. She, however, concluded by saying that her final decision will be made known to everyone soon.

The match kicks off and Barley was taking control of the match, Rubby Riot tried to fight back but she was constantly overpowered and taken down by Barley. The match continues and Rubby was fired up and started punishing Barley with vicious attack. The brawl continues untill Barley finally delivered a destructive face-force on Rubby Riot and pined her for the 3 counts.

Bianca Belair speaks about her victory at Royal Rumble

Bianca talked about being the winner of the Women’s Royal Rumble match. She said her life changed overnight after her victory at Royal Rumble. She added that her fans spontaneously increased and a lot of well wishes also came to her from the WWE Universe. Bianca said choosing her opponent at WrestleMania will be the biggest decision of her career. She continued her speech and was interrupted by Reginald. Reginald came to offer some piece of advice to the Bianca, he said to Bianca’s face that it is glaring that she can not defeat Sasha banks or Carmella. Carmella music plays and she walked into the ring and said she had defeated Shasha Banks in the past and she is going to defeat Bianca.

Shasha Banks music plays and she made her way into the ring with the microphone. She complimented Bianca for her speed, courage and energy to emerge as the winner of the Women’s Royal Rumble match. She added that it is a good idea if Bainca will be challenging her for the SmackdownWomen’s title at the main event of WrestleMania. Shasha Banks however, made it clear to Bianca that she is not the best in the women’s devision as she doesn’t own a title. Reginald interrupted and said if Bianca will be challenging Banks at WrestleMania then she is probably going to lose. Bianca reacted by beating and taking out Reginald out of the ring with her long hair.

The match started with Ziggler and Gable in the ring. Gable was displaying some flexibility on Ziggler but he was eventually taken out by Ziggler. Bobby Roode and Ziggler continued to inflict painful punishment on Gabble.

Gable fired up, fought back and taped Otis. Otis entered into the ring and took out ziegler and Rhoode. The struggle for victory continued until Bobby Roode delivered the glorious DDT on Gabble to pick the win.

Hulk Hogan speaks about his match with Andre the Giant on the 5th of February 1988. He added that Edge is incredible wrestler and as his partner the Hukamanians are watching his path. He concluded his speech by saying he is giving full support to Edge at the main event of WrestleMania for the title opportunity match.

The match begins and Sami Zayn ran out of the ring leaving Biggie and Apollo to fight. Biggie took out Apollo with a punch on the nose, Sami Zayn quickly ran in and Biggie took him out too. Apollo crew fired up and delivered multiple german suplex to Biggie. The brawl continues and the 3 wrestlers were fighting each other and building up momentum outside the ring.

Back from the commercial break, Sami Zayn was taking control of the match and punishing Biggie and Apollo. Apollo fired up and delivered a drop kick to Zayn and Zayn rolled out of the ring. Biggie grapped Apollo and gave him a belly-to-belly attack. The brawl continues and the 3 wrestlers will performing incredible actions in the ring for the title match. Sami Zayn got a good opportunity, delivered the lumber kick on Biggie and pinned him, when the referee was about to hit the third count Apollo pulled Sami Zayn out of the ring and cost him the victory.

Apollo further attacked Zayn, lifted him up and threw him into the time keeper’s section. Apollo entered into the ring and Biggie graped him, delivered his finisher on him and successfully pined him for the 3 counts to retain his title

Edge opens his speech by saying “You can’t accomplish something you have never dreamed of”. He said his last 7 months of rehabilitation was all about dreaming of winning the Royal Rumble, main eventing WrestleMania and taking back what he never lost. He spoke about his decision of championship match at WrestleMania. He talked about choosing Drew McIntyre ,(the WWE champion) Finn balor (the NXT champion) and Roman Reigns (the universal champion).

Roman Reigns said edge disrespected him and his family and added that Edge should acknowledge him as his choice of champion at the main event of WrestleMania. Kevin Owens came from behind attacked and took out Reigns to end the show.