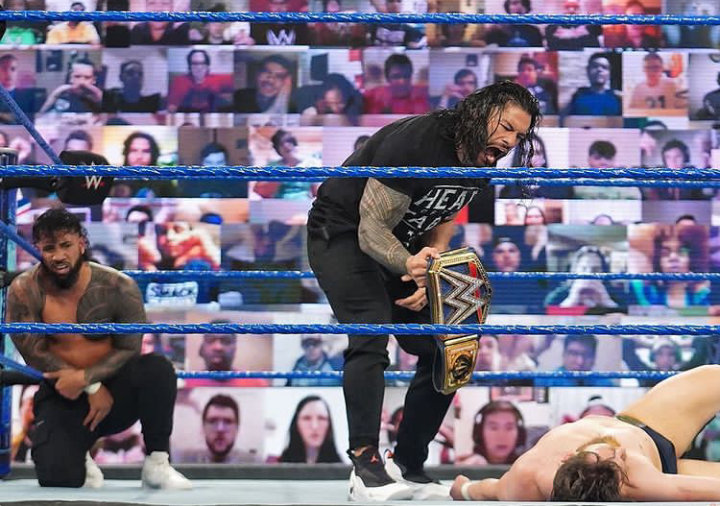 Tonight is the first SmackDown after Elimination Chamber and it will kick off by 8/7c on Fox inside the WWE thunderdome at Tropicana field, Florida.

The Universal champion ‘Roman Reigns’ kicked off the show as he walks into the ring accompanied by his cousin ‘Jey Uso’ and special counsellor ‘Paul Heyman’. Roman Reigns said it is no longer a secret that SmackDown absolutely needs him . He talked about his victory at Elimination Chamber, smashing Bryan and retaining his title. Roman Reigns boasted that he operates in the ring with higher levels of perfections. He talked about Edge spearing him in his ring at Elimination Chamber and challenging him for a match at WrestleMania. Reigns, however, offered an advice to Edge to back out from challenging him at WrestleMania because that he doesn’t want to hurt him.

Jey Uso got irritated by Bryan’s words and he said to Bryan’s face that he is just a loser looking for excuses to cover himself up. He said the best of the best (Roman Reigns) defeated him perfectly at Elimination Chamber and there is no doubt about it. Jey Uso ended his speech by saying that if Bryan will face Roman Reigns at Fastlane then he will have to go through him tonight on SmackDown.

Tag Team Match: The Mysterio vs Otis and Gable

The match begins with Otis and Rey Mysterio in the ring and Otis was in total control of the match. Otis tagged Gable and they continued to dish out painful punishment to Rey Mysterio. Rey Mysterio fired up, delivered a kick to the head of Gable and tag Dominik into the ring.

Dominik hits the ring, overpowered Gable and grabbed him to rest on the ring rope for a double 619 with his Dad( Rey Mysterio). Rey Mysterio top rope and hit Gable with a massive forward splash and almost pinned him for the 3 counts but Otis entered the ring and ruined his victory. Otis then drive Dominik out of the Ring with a forearm and smashed Rey Mysterio with a destructive forward splash from the top rope to pick the win.
Otis & Gable def. The Mysterio via pinfall

Apollo Crews speaks about his heritage

Apollo Crews hits the ring and spoke about his sudden change of character. He said he had been humble, good and respectful but he had never been credited for it and this is absolutely unacceptable. He talked about his Nigerian heritage. He also talked about his grandfather dominating the richest part of his kingdom with 5 wives. Apollo Crew said he had learnt from his grandfather that “If the enemies defies you then you show them the steel”.

Apollo Crew maintained that he represents dominance, wealth and power and that he will continue to take out whoever that crosses his path or disrespects him. He added that Biggie is suffering from the consequences of his actions and that he will do the same thing to Nakamura tonight.

Shinsuke Nakamura music hits the air and interrupted Apollo’s speech as he makes his way into the ring. Apollo got angry and attacked him from behind and Nakamura rolls out of the ring. Apollo then grabbed the steel step and wanted to hit Nakamura with it but he was stopped by the referee and the show goes on commercial break.

Back from the commercial break the match started and Apollo Crew was seen brutalizing Nakamura. The brawl continues and Apollo hits Nakamura with a german suplex but Nakamura maneuvered and started fighting back.

Apollo fired up and connected Nakamura with multiple suplex and the match continues.
Nakamura got fired up and started decimating Apollo crew. He grabbed Apollo to the turnbuckle to continue his punishment on him. Appolo used the apron hang on the turnbuckle as a weapon to hit Nakamura and delivered a kick right to his head. Apollo then connected him with his finisher and successfully pinned him for the 3 counts.
Apollo Crew def. Shinsuke Nakamura via pinfall

The match started with so much display of athleticism from Morgan but she was overpowered by Tamina. Tamina hit her with a clothesline, connected her with a suplex and pinned her for the 2 counts. Morgan tried to fight back but she was slammed with a face force by Tamina.

Morgan finally got fired up, delivered a kick to Tamina and hit her with another drop kick from the top rope and pinned her for 1 count. Tamina charged up, hit Morgan with a samoan drop and delivered her finisher on Morgan to pick the win.
Tamina def. Liv Morgan via pinfall

Adam Pearce and Sonya Denville stood in the ring and welcome Bianca to declare her opponent at the main event of WrestleMania.

Bianca music hits and she walked directly into the ring. She said it has been exactly 3 weeks, 6 hours and 2 seconds since she won the Women’s Royal Rumble match that has changed her life. Sonya Denville then asked Bianca if she is going to face the Raw Women’s Champion (Asuka) or the SmackDown Women’s Champion (Shasha Banks) at WrestleMania. Bianca responded by saying her mother has always told her that life is all about choices but if you make a bad choice then it will hurt you forever. She continued her speech untill Reginald interrupted her.

Reginald credited Bianca for her victory at Royal Rumble. He said if Bianca decides to face Shasha Banks at WrestleMania then her dream will eventually dissolve into a nightmare and she will definitely lose to Shasha Banks. Shasha banks interrupted Reginald and she walked into the ring.

Shasha Banks grabbed the microphone from Reginald and warned him never to speak for her anymore. She said if Bianca wants to be on the spotlight then she has to face the boss at WrestleMania. Bianca responded by saying she is going to prove to the world that she is the strongest and best by defeating Banks and capturing her tittle at WrestleMania.

The Streets Profits vs Baron Corbin and Sami Zayn

The match started with Montez and Sami Zayn wrestling in the ring with massive display of power and athleticism. Montez tagged Dawkins and Zayn tagged Corbin into the ring. The match continues and Dawkins hits Corbin with a dropkick and tagged Montez into the ring to continue to decimate Corbin as the match goes into commercial break.

Back from the commercial break, Corbin was seen decimating Montez and tagged in Zayn and they both continue to inflict painful punishment on Montez. Montez fired up and tagged Dawkins into the ring. Dawkins unleashed his fury on both Corbin and Zayn but he was later overpowered and taken out. Baron Corbin was shoved out of the ring and seen being filmed by Sami Zayn cameramen.

Baron Corbin was angry being filmed by Sami Zayn’s cameramen outside the ring and this distracted Zayn in the ring. Montez delivered high dive to Corbin outside the ring. Dawkins grabbed Zayn and hit him with a massive face force then Montez connected him with a forward splash from the top rope and pinned him for the 3 counts.
The Street Profits def. Baron Corbin and Sami Zayn

Daniel Bryan vs Jey Uso (If Bryan wins then he will face Roman Reigns at Fastlane for the Universal Championship).

Jey Uso took control of the match at the early moments that the match started but he was overpowered by Bryan and the brawl continues. Bryan hit Uso with a clothesline and connected him with a dropkick at the ring corner. Uso rolled out of the ring and Bryan wanted to deliver a high drive but he was taken out with a super kick from Jey Uso. Usos carried him and hit his injured leg on the announce table and to the ring post as the show goes on commercial break.

Back from the commercial break, the brawl continues and Usos was seen capitalising painful attack on the injured leg of Bryan. Uso top rope and wanted to hit Bryan with a forward splash but Bryan dodged it and Uso fell to the ring floor. Bryan got fired up, delivered a superplex to Uso from the top rope and tried to hold him with the yes lock but Usos resisted the lock and they both rolled out of the ring. They continued to wrestle outside the ring until the referee started and completed the 10 count out which made the match cancelled and ended in a no contest.
The match ended in a no contest.

Roman Reigns then stood up, delivered a massive spear to Bryan and put him to sleep with his submission hold to stand tall as the ‘Head of the Table’ end the show.