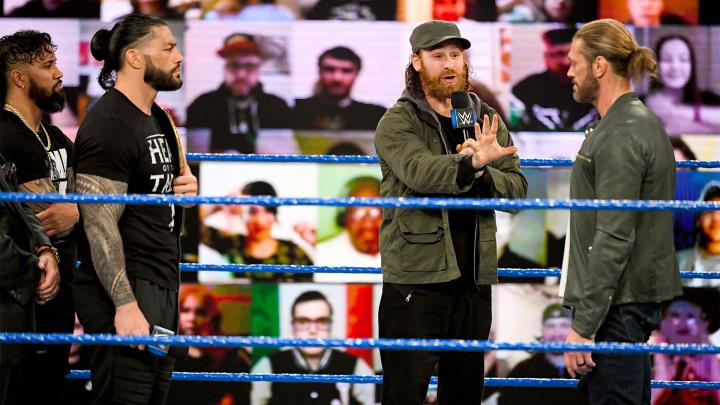 Tonight is the last SmackDown before Elimination Chamber and it will kick off by 8/7c on Fox from Tropicana field inside the WWE Thunderdome.

The winner of the 2021 Royal Rumble Match ‘Edge’ opened the show and he makes his way into the ring. He said he had a very big decision to make this sunday as regard his main event oponent at WrestleMania. He also talked about Drew McIntyre and Roman Reigns defending their title at Elimination Chamber which will leave him with the biggest decision of his career as regard who he will choose at the main event of WrestleMania for the championship match. He continued his speech and Roman Reigns music hits the air and the Big Dog (Roman Reigns) walked into the ring accompanied by his cousin ‘Jey Usos’ and special counsellor ‘Paul Heyman’.

The Head of the Table ‘Roman Reigns’ hits the ring and asked Edge to acknowledge him as his main events opponent at WrestleMania, Edge replied him by saying that he can’t just acknowledge Roman Reigns as his choice of opponent at WrestleMania and that Roman Reigns is feeling insecure because he feels i am a total threat to him. He continued his speech untill Sami Zayn music plays and interrupted him. Sami Zayn makes his way into the ring and boast that he is a full threat to both Roman Reigns and Edge. He said there is a conspiracy and that WWE doesn’t want him at the Elimination Chamber match but he has found a way and planted himself into the match. Zayn said “Edge might be an opportunist but I am the master strategist”. Sami Zayn warned that Roman Reigns and Edge should acknowledge him as the best as he would would walk out of WrestleMania as a champion. Zayn told his cameraman to capture the amazing moment he was pointing to the WrestleMania symbol. Sami Zayn continued to boast until he was finally put into silence with a superkick from Jey Usos.

Shortly after Jey Usos delivered a superkick to Zayn, Roman Reigns handed the microphone to him and the Universal title to Paul Heyman. He then walked closer to Edge and whispered some words into his ear. Roman Reigns stepped back after whispering words into Edge’s ear and walked out of the ring alongside with Paul Heyman and Jey Usos.

The match begins and Nakamura took control of the match at the early moment on the match as Biggie watches from the commentary section. Apollo crew fired up and shoved Nakamura out of the ring with two drop kicks as the show goes on commercial break.

Back from the commercial break, Nakamura was getting fired up and inflicting punishment on Apollo. He continued to decimate Apollo crew but Apollo fought back and pinned him for 2 counts. They continued to wrestle until Nakamura incredibly found a way and skillfully pinned Apollo for the 3 counts to pick the win.
Shinsuke Nakamura def. Apollo Crew via pinfall.

Apollo Crews attacked nakamura while he was celebrating his victory. He brutally assaulted Nakamura around the ringside. Apollo Crew carried the steel step and wanted to attack Nakamura with it but he was stopped by Biggie and told to walk away as the match is over. Biggie then walked towards Nakamura to check on him, Apollo Crew took advantage of Biggie’s attention on Nakamura and hits Biggie with the steel step from behind.

Apollo Crew took Biggie into the ring and wanted to continue the attack on him with the steel step but he was stopped by the referee. Biggie then rolled out of the ring and Apollo crew droped the steel step right on him at the ringside. After the brutal attack on Biggie, the WWE medical officials came out and took Biggie out of the ringside with a stretcher as Seth Rollins makes his way into the venue.

Seth Rollins standing at the entrance condemed Apollo’s attack on Biggie and called it a ‘Tragedy’. He said he had an emotional trauma when the entire WWE SmackDown rooster turned their back on him on his return to SmackDown last week. He called them loosers and also spoke about Cesaro disrespecting and ruining his moment last week on SmackDown. He, however, advised that everyone in the SmackDown roster should acknowledge him as their leader and embrace the vision as he ends his speech and head back into the locker room.

The Riot squad fired up and started to inflict painful punishment on Natalya. Natalya charged up and tapped Tamina into the ring.
Taminal entered into the ring, shoved Ruby Riot out of the ring and connected Morgan with her finisher move for the 1-2-3 counts.
Taminal and Natalya def. Rubby Riot and Liv Morgan via painful

Bayley opens the second edition of the Ding Dong Hello show on SmackDown and welcomed the WWE Women’s Tag Team Champions as the special guest into the show. Bayley thanked them for being part of her show and she said Nai Jax and Shayna Baszler being the WWE Women’s Tag Team Champion has given her the opportunity to take out Sasha Banks. Nia Jax, Shayna Baszler and Bayley belittlled and ridiculed Shasha Banks stating that she is a fake and and weak person.

Reginald interrupted their speech and condemned them for rubbishing Sasha Banks. He praised Sasha Banks stating that she is like an expensive wine, gold and diamond while Nia Jax and Baszler are just like disposable trash.

Sasha banks music plays and she heads into the ring, she warned Reginald never to speak for her again. Shasha banks maintained that whether they like it or not she remains the boss of the women’s division.

Bianca Belair music hits the air and she makes her way into the ring. She stood on the point that she is the fastest, best and EST of the WWE women’s division. Reginald interrupted her speech and said that Sasha Banks, Bianca and him are on the same page and should not be fighting each other. He then suggested that they should be battle Bayley, Nia Jax and Baszler tonight on SmackDown. Nai Jax accepted his challenge and called for a referee to make the match start.

The whole female wrestlers were out of the ring leaving Nia Jax and Reginald in the ring fighting for the victory. Nia Jax took Reginald down and continued to unleash her fury on him. She was almost at the point of taking out Reginald for the win as shasha and Bianca entered into the ring, delivered double dropkick to her and Reginald successfully pinned her for the 3 counts.
Shasha Banks, Bianca Belair and Reginald def. Bayley, Nia Jax and Shayna Baszler

Cesaro was being interviewed backstage and asked about the vicious attack on him by Seth Rollins last week on SmackDown. Cesaro ignored Seth Rollins vision and spoke about becoming the Universal Champion this Sunday at Elimination Chamber. He confidently spoke that he would walk out of the Elimination Chamber as the Universal champion this Sunday. Edge joined him during the interview.

Cesaro made it clear in his statement that he will be meeting Edge at the main event of WrestleMania after defeating Roman Reigns at Elimination Chamber this sunday to become the new Universal Champion.

Rey Mysterio and Dominic Mysterio Vs Otis and Chad Gable

Chad Gable and Dominic started the match and they were both building up powerful momentum in the ring. Gable tapped Otis into the ring and Otis hits Dominic with a massive clothesline and Dominic immediately tapped Rey Mysterio.

The match begins as Edges sits at the commentary section and watches the match.

Jey Usos and Daniel Bryan kicked off the match and they were both performing incredible in-ring actions. Jey tapped Corbin into the ring and he started beating up Bryan. The team of Corbin was seen dishing out punishment to Bryan until he luckily tapped Cesaro into the ring. Cesaro hits the ring, took out Jey Usos and Corbin from the ring rope side and started delivering multiple uppercuts to Sami Zayn in the ring. Cesaro continued his dominance on the team of Baron Corbin as the show goes on commercial break.

Back from the commercial break, the match continues and Cesaro was seen punishing Corbin until he was being overpowered outside the ring by Jey Usos. Jey Usos took Cesaro into the ring and the team of Corbin started inflicting punishment on him. Cesaro tapped Daniel Bryan into the ring.

Bryan hits the ring and started taking out all the members of the team of Corbin. Bryan took down Sami Zayn and continued to control the match. The team of Corbin hit the ring but they were all overpowered and shoved out of the ring by the team of Daniel Bryan. Daniel Bryan draged Cesaro to the top rope, connected him with a massive superplex and hits him with the omoplata cross face sumission hold to secure the victory.
Kevin Owens, Daniel Bryan and Cesaro def. Jey Usos, Baron Corbin and Sami Zayn via submission.

Shortly after the match ended, Baron Corbin attacked Bryan from behind with the ‘End of Days’ finisher. Kevin Owens hits Corbin with ‘Stunner’. Sami Zayn connected Owens with ‘Sporer’. Cesaro delivered a destructive ‘Uppercut’ to Sami Zayn, Jey Usos hits Cesaro with the ‘Superkick’ , Edge connected Jey Usos with the ‘Spear’ and Roman Reigns delivered a massive ‘Spear’ to Edge and stood tall as the Head of the Table as the show goes to an end.