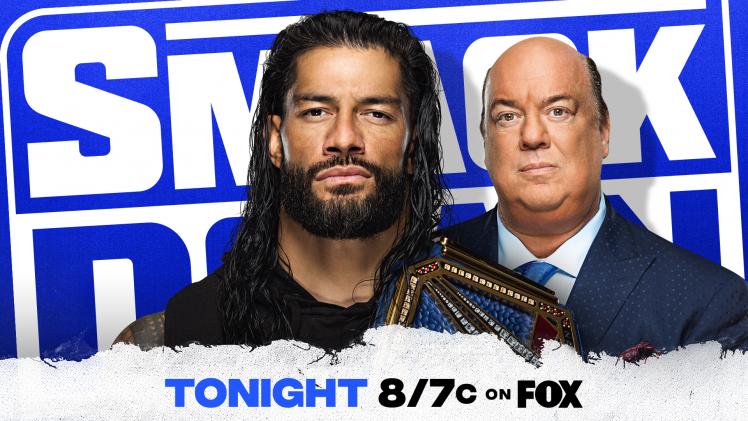 On the road to WrestleMania and preparation for the upcoming Elimination Chamber Pay-Per-View match, tonight’s SmackDown will kick off by 8/7C on Fox inside the WWE thunderdome at Tropicana field and it will feature a lot of fascinating matches.

Adam Pearce kicked off the show and called on Roman Reigns accompanied by his cousin Jey Usos and his advocate Paul Heyman for the special announcement for the Universal Championship.

Adam Pearce announced the contract for the Universal Championship that Roman Reigns will defend the title against other superstars in the Elimination Chamber just like Drew MycIntre will be doing. Roman Reigns and Paul Heyman were not too happy about this and they kicked against it.

Adam Pearce agreed and said he would work on it. He however, revealed that jey USO and Kevin Owens are already given an automatic ticket to participate in the Elimination Chamber match with the speculation that the winner will battle Roman Reigns for the Universal Championship the same night at Elimination Chamber.

Back from the commercial break, the match continues and Mysterio team continues to control the match. They continued to punish Zayn and Corbin and they connected Corbin with double 619. The match continues, Mysterio and Corbin were out of the ring leaving Dominic and Zayn battling for victory inside the ring. Sami Zayn took control of the match, hits Dominic with a suplex to the turnbuckle, connected him with the helluva kick and pinned him for the 3 counts.

Baron Corbin and Sami Zayn def. Rey Mysterio and Dominic Mysterio to participate in the Elimination Chamber match for the Universal tittle shot.

Big E offers a open challenge for the Intercontinental Championship

Biggie talked about the his successful tittle defence against Apollo crew and Sami Zayn last week on SmackDown. He said he had made a vow to himself the day he won the Intercontinental Championship that he will always be a fighting champion.

Apollo crews music hits the air and he interrupted Big E’s speech. He made his way into the ring and challenged Big E to a match for the Intercontinental championship but Big E turned down the challenge and maintained that can only accept challenge from every other person in the SmackDown roster but not Apollo crew as he is completely done with him. They continued their argument until Shinsuke Nakamura music plays and he heads into the ring for Big E.

The match begins and Nakamura was taking control of the match while Apollo crew is standing at the ringside watching the match. Biggie fired up and fights back but he was distracted by Apollo, Nakamura took advantage of the distraction and continue to dominate the match. Biggie finally got fired up and started beating up and punishing Nakamura. Biggie was at the point of winning the match as Apollo crew came into the ring and hits him with a dropkick to get the match cancelled.

The intercontinental championship match ended in a no-contest

The entire SmackDown roster came out and stood at the ringside to honour and officially welcome Seth Rollins to SmackDown.

Seth Rollins music hits the air and he makes his way into the ring. Rollins talked about being a father for the first time. He said he is a father to a beautiful and perfect baby girl that has really changed his life and given him a new vision and perception.

This statement made the entire SmackDown roster angry and they all left the ringside except Cesaro. When Cesaro finally took his leave, Seth Rollins attacked him from behind and continued to assault him untill Daniel Bryan and other referees came for his rescue.

Liv Morgan delivered a drop kick to Bayley at the early moments of the match and continued to decimate and punish her. Bayley rolled out of the ring and Liv Morgan went after her. Liv Morgan tried to attack Barley outside the ring but she was thrown to the barricade by Bayley. The match continues and they were both building up huge momentum in the ring. Bayley fired up, took control of the match, inserted her finger into the eyes of Morgan and hits Morgan with her finisher to pick up the win.

The match started with Dawkins and Gabble wrestling in the ring. They were both fired up and displaying fantastic athleticism. Dawkins tapped Montex and the brawl continues. Otis team start to dominate the match and took Montex out of the ring leaving Dawkins in the ring and almost pickiing up the win against him until Montex got into the ring, took out Otis and hits Gabble with his finisher from the top rope for the 1-2-3 counts.

Sasha banks talks about Bianca and her decision for tittle match on the road to WrestleMania. She said Bianca is like a big little sister and she likes her. Bianca music plays and she makes her way into the ring. She said Shasha is the boss and she also liked her. Shayna baszler and Nia Jax interrupted their speech and they both walked into the ring. Nia Jax said she doesn’t care about Bianca’s title match decision at WrestleMania. Nia Jax revealed that she and Shayna Baszler are the most decimating forces in WWE and they defeated Charlotte and Asuka at Royal Rumble to emerge as 2 times WWE Women’s Tag Team Champions.

Sasha banks then ordered the replay of the match between Lana and Nia Jax last week SmackDown and this left Nia Jaxt angry and humiliated after watching the video. Nia Jax and Baszler tried to attack Shasha and Bianca but they were eventually over powered and taken out of the ring.

The match begins with Bryan and Ziggler battling in the ring. The match continues and both teams are performing an incredible in-ring actions and inflicting punishment on each other. Bobby Roode and Ziggler get charged, took Bryan and Cesaro out of the ring, drove them through the steel step and continued to take control of the match as the show goes on commercial break.

Back from the commercial break, the match continues and Bobby roode was punishing Bryan with series of painful attacks. Roode tapped Ziggler and he continued to punish Bryan. Bryan got fired up and delivered a dropkick to Ziggler from the top rope and Ziggler quickly tapped Bobby Roode. Roode hits the ring, took out Cesaro from the ringside and continued to attack Bryan. Bryan recovered and tapped Cesaro. Cesaro entered the ring and unleash his fury on both Roode and Ziggler. He delivered multiple uppercut to Ziggler untill he connected Ziggler with his summision move to secure the victory.

Immediately after their victory, Jey Usos came from behind and attacked Cesaro with a steel chair. Baron Corbin and Sami Zayn also entered the ring and beat up Bryan and Usos. Kevin Owens music hits the air and he makes his way into the ring to deliver multiple stun to all the Elimination Chamber competitor in the ring to end show.