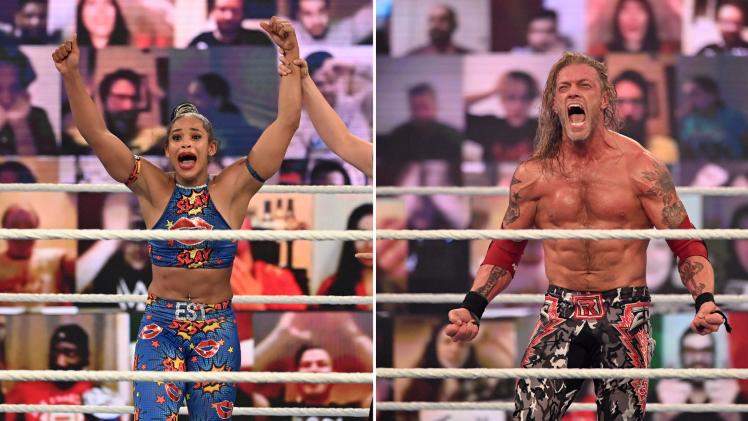 Nia Jax and shayna baszler music plays and they make their way to the ring. Asuka and Charlotte music played thereafter and then join them in the ring.

The match begins with Shanya Baszler and Charlotte flair building up momentum and fighting in the ring. The match continues and Nia Jax and shayna baszler continues to inflict painful punishment on Asuka. Asuka tried to fire up but she was constantly overpowered by these two iconic Superstars.

Asuka was taken out and thrown into the announce table area. The brawl continues and Charlotte almost took out Shanya for the win until the Nature Boy (Rick Flair) and Lacey Evans came to distract her. Charlotte delivered a punch right to the face of Lacey Evans and she fell to the ground outside the ring. The struggle for victory continues until Nia Jax eventually delivered her finisher move on Charlotte and successfully pinned her for the 3 counts by the aid of the distractions caused by the Rick Flair and Lacey Evans.
Nai Jax and Shanya Baszler def. Charlotte flair and Asuka via pinfall to become the New WWE Women’s Tag Team Champions

Drew Mycintre Vs Bill Goldberg for the WWE Championship

Bill Goldberg music plays and he makes his way to the ring as he awaits Mycintre to join him to start the WWE Championship match.

The promo for the WWE Championship match between these two iconic superstars was played while Goldberg was still in the ring.

Drew Mycintre music plays thereafter and he walked directly into the ring with full confidence and a frown face.

The bell was rung and the match starts officially. Goldberg tried to spear Mycintre but he attacked Goldberg with a claymore kick and pinned for the 2 counts. Goldberg got fired up and speared Mycintre for the 2 counts, he also delivered the jackhammer on the scottish psychopath and to his surprise McIntyre kicked out of 2 counts. The match eventually ended when Mycintre delivered the final claymore kick to Goldberg and successfully pinned him for the 3 counts.

Goldberg stood up after the match, embraced Mycintre and told him that ,”You passed the test”
Drew Mcntyre def. Bill Goldberg via pinfall to retain the WWE championship

Shasha Banks vs Carmella for the WWE Smackdown Women’s Championship.

The match begins and Shasha banks quickly took her down to deliver the bank statement but she was successfully able to block it and run out of the ring. She walks into the ring again and the match continues. Carmella started to take control of the match with the aid of the distractions caused by Reginald. The match continues and Carmella is still dominating the match tying Sasha banks hair to the ring rope and punishing her. Shasha Banks became fired up and started fighting back, she continues to decimate Carmella with knee attack and super plex.

The referee finally sent Reginald out of the ringside due to multiple distractions he was causing. Carmella locked Sasha banks neck with her submission move but Sasha broke it and didn’t tap out. The fight continues and Sasha Banks finally delivered the bank statements on Carmella and won the match via submission.
Shasha Banks def Carmela to retain her WWE Smackdown Women’s Title

The performance was incredible and fascinating and ended into massive cheers from the entire WWE universe streaming through the thunderdome.

Barley kicked off the 30 women’s Royal Rumble match and makes our way into the ring. Naomi music plays and she joins Barley in the ring and they started fighting for the survival.

Toni storm from NXT came in as number 7 and delivered multiple suplex and attacks on other women in the ring. Shayna Baszler eliminates Shortzi as Julian Hall came next to join the Royal rumble match. The process continues and other WWE female superstars came in to join the match.

Bianca and Rhea Ripley were the last women in the ring and they were both delivering different attacks on each other so as to win the match. The match eventually ended when Bianca threw her over the top rope and emerged as the winner of the 2021 Women’s Royal Rumble match.

The match begins and both wrestlers were getting fired up and attacking each other. Roman reigns delivered superman punch to Kevin Owens. Kevin Owens backfired and power-bombed Reigns in the ring and the referee begins the first count out. They continued to attack each other and moved to the entrance, this is where Kevin Owens grabed the steel chair and started capitalising attack on the leg of Roman Reigns. Reigns resisted the attack, delivered a superman punch on Kelvin Owens and grabed the chair from him and brutally hit him with it. Reigns threw Kelvin Owens from the top of the thunderdome TV and put him through the table.

Roman reigns dragged Kevin Owens to the backstage and the struggle for victory continues there. Kevin Owens got fired up and started controlling the match. He beat down Roman reigns and power-bombed him on the announce table. He dragged Reigns back to the entrance and Roman Reigns started to fight back from there. Reigns delivered a superman punch on Kevin Owens again and speared him through the screen, the referee start the count out and Kelvin Owens beat the count.

The brawl continues and Kelvin Owens handcuffed Roman reigns to a steel stand then the referee starts the count out, when the referee was about to complete the count Roman reigns grapped him and pulled him to hit a steel stand. Kevin Owens walked closer to Reigns in other to continue the attack on him but reigns resisted the attack by giving him a low blow and called Paul Heyman to unlock the handcuff. Heyman struggled for minutes before he could unlock the handcuff. He finally unlocked Roman Reigns. Roman Reigns walked directly to Kevin Owens, locked his neck and put him to sleep for the 10 counts.
Roman Reigns def Kelvin Owens to retain his Universal Championship

Edge and Randy Orton took their rivalry to the extreme as Edge brutally attacked him with steel chair on his leg and this made Randy Orton to be taken out of the match venue and attended to by the medical teams backstage.

The Royal rumble match continues and eliminations were seriously going on.

Edge and Seth Rollins were the last 2 men in the ring and Edge eiliminated Seth Rollins. Randy Orton suddenly appeared from behind and delivered RKO on Edge. He stood up, dragged Edge and tried to throw him over the ring rope to eliminate him but Edge resisted him and successfully throw the viper out of the ring over the ring rope.
Edge Wins the 30 Men’s Royal Rumble Match