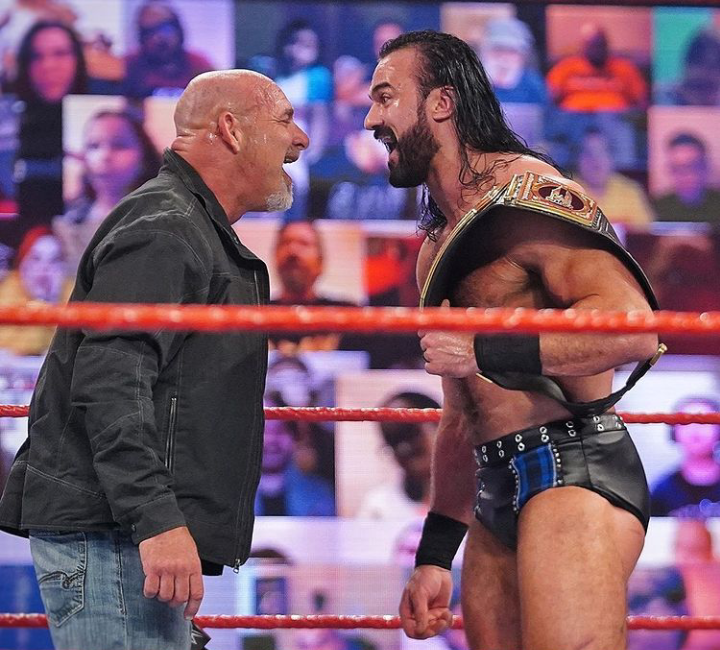 Tonight is the last Monday Night Raw before Royal rumble this Sunday and it will be kicking off by 8/7c on USA Network. This Monday Night Raw will be featuring a lot of incredible in-ring actions so as to prepare for the coming Royal Rumble pay-per-view match.

Drew Mycintre kicked off the show by thanking the entire WWE universe for their support and well wishes while he was battling with COVID-19, he also spoke about the symptoms has been experiencing from COVID-19 such as lost of smell and other symptoms. However, he assured the WWE universe that he is getting over this already. He also talked about the winning streak of Goldberg since he has been in the company.

Mycintre added that he has been watching Goldberg since he was a teenager and it is glaring that Goldberg have always been successfully taking out anyone that crossed his path. He also mentioned that since Goldberg has returned to WWE has always been constantly defeating every other wrestlers that came his way. Mycintre made it clear in his statement that he will end Goldberg winning streak this Sunday and retain his WWE championship.

The Miz and John Morrison music plays and interrupted Mycintre speech. The Miz said Mycintre should be expecting consequences at Royal Rumble as he may likely cash in his Money in the Bank contract to join the match and eventually be crowned the New WWE champion.

Goldberg music kicks off and he walked directly into the ring, took the mic and spoke to Mycintre face by saying “This sunday, you are next”. The Miz and Morrison standing outside and resting on the ring rope tried to convince Mycintre to disrespect Goldberg but the situation turned around as Goldberg draged The Miz into the ring and delivered a massive spear on him and Mycintre took Morrison into the ring and gave him a claymore kick.

Charlotte Flair was taking control of the match at the early moments of the match but the match was cancelled when Nia Jax came to attack Charlotte to break her submission move on Shayna Baszler. The attack on Charlotte continued until Mandy Rose and Dana Brooke ran into the ring for her rescue.

The match started with Charlotte team dominating the match and ended earlier by count-out in favour of Charlotte’s team when Shayna couldn’t make it into the ring before 10 count.

Lacey Evans complained to the WWE official Adam Pearce about how the match ended and Adam asked if both teams agree to restart the match and they both said “Yes”. Adam then authorised the match to restart.

Back from commercial break the match restarts again.

The two teams are fired up and they continue to struggle for the win. However the team of Lacey Evans finally stood tall for the victory when Nia Jax choke slammed Dana Brooke and successfully pin her for the 3 counts.

The match started and Xavier Wood delivered a running kick to Slapjack and started punishing him. Slapjack fired up and started fighting back but Xavier woods resisted him and dominated the match.

Mustafa Ali standing outside the ring with other members of the Retribution told one of the members to go distract Xavier wood so that Slapjack can win the match but the situation turned around in Xavier’s favour when he delivered a massive knee strike to the face of Slapjack and pinned him for the 3 counts.

The retribution attacked Xavier immediately after his match and Mustafa Ali grabbed a steel chair and wanted to hit Xavier wood but he changed his mind and sat on the chair. Ali then passed a message to Kofi Kingston that he will be joining the Royal Rumble this Sunday.

The Hurt Business music plays and they all walked directly into the ring as they are led by their leader MVP to host the VIP lounge.

R-Truth music plays and he ruin the VIP Lounge show when his other opponents came to fight him for the 24/7 championship. Riddle then came from behind and delivered a knee strike right on the face of MVP and ran away.

The match started with Riddle against Benjamin. They were both fired up and performing an incredible actions in the ring, Riddle took out Benjamin and pin him for the 3 counts. Immediately after his victory MVP entered into the ring and Riddle instantly delivered his submission finisher on him and MVP tapped-out.

Back from commercial break, the Gauntlet match continues and it is Riddle Vs Cedric Alexander.

Alexander was dominating the match and capitalising painful punishment on Riddle. Riddle eventually became fired up and successfully pined him for the 3 counts to win the match.

Sheamus music plays and he made his way into the ring.

Back from commercial break, The Miz accompany John Morrison to the ring and the match begins as The Miz watch them from the ringside.

The match starts and both wrestlers are constantly getting fired up and performing an incredible in-ring actions. Morrison became charged up at a point and started dominating the match while capitalising punishment on the knee of Sheamus. However, Sheamus eventually turned the match around, delivered a massive kick to the face of Morrison and pinned him for the 3 counts.

The Miz challenged Sheamus to an Handicap match after his victory to prove that he’s ready for Royal Rumble and he accepted the challenge.

Handicap Match: Sheamus Vs The Miz and Morrison

The match started and they decimated, victimized and punished Sheamus. The Celtic warrior (Sheamus) became fired up at some points and started controlling the match by taking out The Miz and Morrison. Sheamus luckily delivered a drop kick on Morrison and The Miz came from behind and delivered the Skull- crushing finale on Sheamus for the 3 counts.

The Miz and Morrison def. Sheamus

AJ styles attacked him with a kick on the face as the match begins and continue to take control of the match. R-Truth surprised AJ styles with some amazing skills in the ring when he kicked Styles out of the ring. The brawl continues and the match ended when AJ Styles delivered his submission move on R-Truth for the win.

Edge appears on Monday Night Raw and he gave an update about his health condition. Recall that Edge has been out of in-ring action since June 2020 due to triceps injury during his match against Randy Orton. He said that his injury have taught him that tomorrow is a mystery and it’s not guaranteed. He, however, declared that he would be joining the Royal Rumble this sunday.

Asuka Vs Alexa Bliss for the Raw Women’s Tittle Match

The match kicks off and Asuka was taking control of the match and inflicting punishment on alexa Bliss but Alexa wasn’t taking her serious as she was smiling while being punished.

Back from the commercial break, the match continues and Alexa Bliss was taking control of the match and smiling at the same time. The match eventually ended in astonishment and no contest as Randy Orton appears and delivered a massive RKO on Alexa Bliss to end the show.