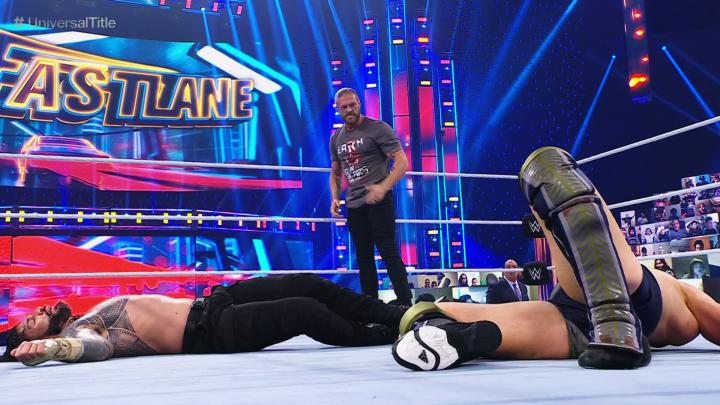 The final pay-per-view event (Fastlane) on the road to WrestleMania kicked-off at exactly 7pm ET inside the WWE thunderdome at Tropicana field and it was embedded with incredible eye-catching matches so as to prepare for WrestleMania 37.

The following are the matches that will take place on tonight’s WWE Fastlane pay-per-view:

The WWE Fastlane kicked off with the WWE Women’s Tag Team Championship match. Bianca was the first to make her entrants and she was joined by her tag team partner ‘Sasha Banks’. The WWE Women’s Tag team Champions ‘Nia Jax and Shanya Baszler also made their way into the ring and they were accompanied by Reginald.

The match kicked off with Sasha Banks and Shayna Baszler in the ring and the legit boss took her down then tagged Bianca and the punishment on Baszler continued. Baszler fired up and started fighting back, she tagged Nia Jax and Bianca tagged Sasha Banks then the brawl continued.

Nia Jax takes on Bianca and started dishing out painful punishment to her. She then tagged Baszler into the ring and she continued to decimate Bianca. Bianca ignited and tagged Sasha then Sashha begins to unleash her fury on both Nia Jax and Baszler.

Bianca hits Baszler with a 450 splash and pinned her but Reginald distracted the referee and he was not able to make the count. Sasha banks then connected Baszler with the ‘Bank statement’ but it was broken by Nia Jax.

A heated argument broke out between Sasha Banks and Bianca in the ring and this gave the opportunity for Baszler to skillfully pin Bianca and secured the victory to retain their Championship.

The match begins and Biggie shoved Apollo Crews out of the ring with a spear and dragged him back to the apron for a tremendous splash. Biggie hit him again with the second splash at the apron and connected him with 2 belly-to-belly suplex in the ring.

Apollo recovered and started fighting back, he hits Biggie with 3 German suplex and a spinebuster. He top-rope and connected Biggie with a splash then pinned him and Biggie kicked out of 2 counts.

The struggle to get the Intercontinental Championship continued until Biggie maneuvered and skillfully pinned Apollo for the 1-2-3 counts to retain his tittle. After the match ended l, Apollo viciously attacked Biggie and vowed to continue his rivalry with him.

Before the match started, the WWE authorities announced that Shane McMahon suffered a knee injury while he was training earlier in the day. Elias Samson then met with Shane backstage and begged him for a musical performance at WrestleMania. Shane McMahon agreed and authorised that Elias should represent him in the match against Brawn Strowman tonight.

Braun Strowman took control of the match at the early moments and decimated Elias with no mercy. Elias ran out of the ring then Braun Strowman dragged him back and hit him on the steel post multiple times.

Elias Samson’s friend (Jaxson) was at the ringside watching the match and he caused a distraction that made Elias to hit Strowman with a DDT and an Elbow drop from the top rope.

Braun strowman charged up and started decimating Elias again. He then grabbed Elias and connected him with the running powerslam and pinned him for the 3 counts to pick the win.

Nakamura took control of the match when it started at the early moments but Rollins recovered and started attacking him with running kicks to the midsection.

Seth Rollins continued to show dominance by decimating and punishing Nakamura. Rollins grabbed his leg to swing him but Nakamura repelled and connected Rollins with his submission move. He then sent Rollins out of the ring with a kick and attacked him with a knee drop outside the ring. Nakamura dragged Rollins into the ring again and hit him with a knee to the midsection then pinned him for the 2 counts.

Rollins fired up and shoved Nakamura out of the ring, he then hits Rollins with a suicide dive into the barricades and dragged him back into the ring. Nakamura recovered and hit Rollins with a suplex from the top rope. Rollins ignited and connected him with a buckle bomb then pinned him for just two counts.

The struggle for the victory continued with huge momentum from both men until Rollkns delivered the stomp on Nakamura and successfully pinned him for the 3 counts to stand tall as the winner of the match.

Sheamus fired up and started decimating MycIntyre with the kendo stick. MycIntre ignited again, then headboot Sheamus and connected him with a massive kick. He then grabbed the kendo stick and started inflicting painful punishment to Sheamus with it.

Sheamus recovered and hit MycIntre with a faceforce to the steel step. He then grabbed the steel step and attacked MycIntre with it. They took their rivalry to the screen section displaying the thunderdome and it was a very brutal one. McIntyre connected Sheamus with a suplex and carried him the commentary section to hit him on the announce table but Sheamus quickly repelled and hit him with the brougue kick.

The Universal Championship Match: Roman Reigns vs Daniel Bryan ( Edge stands at the ringside as the special enforcer for the match)

The match begins and Bryan was looking for all means to get Reigns with the ‘Yes lock’ but Reigns repelled and the match continues. Bryan took Reigns down and was at the point of breaking his arm then Reigns fired up, headboot him and continued to dominate the match.

Bryan charged up and delivered a dropkick to Reigns . Reigns recovered then hit him with a faceforce and continue to dish out punishment to him. The match continues and Reigns shoved Bryan out of the ring with an uppercut then went out of the ring and drove him through the barricades.

The match continued and Bryan was still in charge, he hits Reigns with multiple kicks to the head and pinned him for 2 counts. He grabbed Roman Reigns and connected him with the ‘Yes lock’ but Reigns broke the lock then lifted him up and smashed on him on the floor.

Daniel Bryan wanted to hit Reigns with the running knee but Reigns dodged it and the referee got the kick. Roman Reigns then spared him and Edge ran into the ring and hit the floor for 2 counts. Bryan recovered and connected him with hell’s gate and Yes lock then Jey Uso came from behind and attacked both Bryan and Edge.