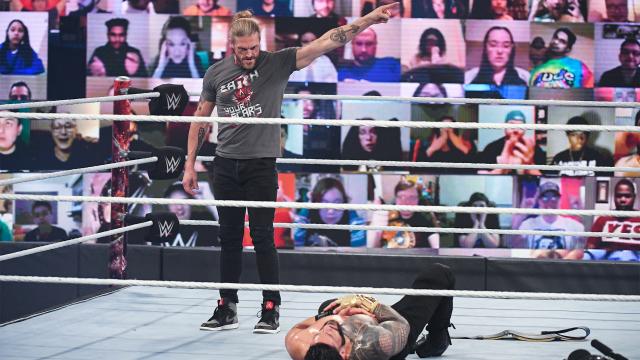 The Elimination Chamber Match kicked off with the Universal Championship Qualifying Match. Kevin Owens was the first person to open the match as he makes his way into the Elimination Chamber and locked in the pod. The next is Sami Zayn followed by Baron Corbin, Jey Usos, Cesaro and Daniel Bryan.

Daniel Bryan and Cesaro kicked off the match and they were filled with so much energy. Cesaro dominated the match at first after connecting Bryan with a back-breaker but he was later overpowered by the ‘Yes Man’ and the struggle for the win continues. Bryan top rope, hit Cesaro with a drop knee attack and pinned him for the 2 counts. Cesaro fired up and started fighting back as he delivers multiple uppercut and suplex to Bryan.

Baron Corbin is released from the pod and he hits the ring with so much energy to decimate Bryan and Cesaro. He dished out painful punishment to Bryan and focus his attack on Bryan’s left leg. Corbin dominated the match and continued to brutalise both Cesaro and Daniel Bryan.

Sami Zayn is the next wrestler released from the pod and Baron Corbin heads towards the pod for him. Corbin stood close to the pod waiting for Sami Zayn to come out and get decimated but his plan failed as Bryan hit him with a drop kick from behind and he fell to the ground. Cesaro then go for Sami Zayn and started beating him up. The struggle for the victory continues and all the wrestlers were performing incredible actions in the ring. Sami Zayn hits Cesaro with a massive DDT and pinned him for just 2 counts. Cesaro hits Corbin with an uppercut, swings him and connects him with his summission hold to get him eliminated.

Kevin Owens is released from the inner chamber and Sami Zayn immediately ran to him so that they can join forces together to fight against other wrestlers but Owens turned him down and continuously dragged him to hit the pods until he fell to the ground. Kevin Owens took control of the match and delivered a neck-breaker to everyone in the ring except Cesaro until Jey Usos was released from the pod.

Jey Usos is the next wrestler released from the pod and Kelvin Owens immediately went for him and started brutalizing him. The struggle for the victory continues and Kevin Owens delivered a stunner to Sami Zayn to get him eliminated. Jey Usos instantly attacked Owens and pinned his hand against the exit door, he hits Owens with several kicks to the head and dragged him into the ring for a massive forward splash that got Owens elimiated.

The match continues as Bryan and Cesaro were seen brutalizing each other. Cesaro delivered a destructive rib-breaker to Bryan from the top rope and wanted to swing him but Jey Usos ruined his plan. Jey came from behind, hits Cesaro with a kick and connected him with a massive forward splash from the top rope to get him eliminated.

Jey Usos went for Daniel Bryan after eliminating Cesaro to take him out but he was repelled and Bryan hits him the running kick to stand tall as the winner of the match.
Daniel Bryan wins the Universal Championship Qualifying Match at Elimination Chamber

Immediately after the match ended the Elimination Chamber cage was removed and the Universal Championship match kicked off.

Roman Reigns music plays and he makes his way into the ring accompanied by his advocate Paul Heyman as he watches the match from the ringside.

The match continues and this time Lashley has been shoved out of the ring by Riddle and Morrison. Riddle was taking control of the match until Lashley entered the ring and Riddle immediately hit him with the knee strike to the face. Morrison heads out of the ring and collected MVP’s crutch to use it on Lashley but MVP immediately alerted Lashley about it. Lashley instantly captured Morrison with his submission hold when he got into the ring. This gave Riddle the opportunity to grab the crutch and shove lashley out of the ring with it.

Bianca and Nia Jax started the match and Bianca was seen humiliating her with skillful move. Bianca tagged Shasha Banks and they continue to decimate Nia Jax to dominate the match. Nia Jax tagged Baszler into the ring and the match continues with Baszler and Shasha Banks in the ring.

Baszler dominated the match and started inflicting painful punishment on Shasha Banks. Banks fired up and tagged Bianca into the ring and Bianca dealt with Baszler to the point of picking the win until Nia Jax ruined her victory by dragging her out of the ring. The match continues and Shasha Banks hits Nia Jax with the bank statement but Nia Jax didn’t tap out.

Reginald came to the ringside to cause a distraction by giving a bottle of champagne to Shasha. Nia Jax made judicious use of the opportunity and connected Shasha banks with the Samoan drop to pick the win.
Nia Jax and Shayna Baszler def. Shasha banks and Bianca Belair to retain the WWE Women’s Tag Team Championship.

Jeff Hardy and Randy Orton kicked of the match and Orton was seen dominating at the early moments of the match. Jeff Hardy fired up and started fighting back, he continued to brutalize Orton and shoved him out of the ring rope as McIntyre is released from the pod to join the match.

Drew McIntyre hits the ring, went for Orton and took him down. He grabbed Jeff Hardy and continued to punish him until Randy Orton came from behind and attacked him with a massive DDT as the match continues.

Kofi Kingston is the next wrestler released from the pod and he immediately wrestled with Orton, pinned and got him eliminated from the ring. Randy Orton delivered a destructive RKO to Kofi Kingston and Jeff Hardy immediately after his elimination and heads out of the ring. Omos removed the covering to the inner chamber and allowed AJ Styles escaped in a bid to pin Kofi and Jeff so as to get them eliminated but his plan failed and Omos was banned from the ringside by Adam Pearce.

The match continues and all the wrestlers are building up huge momentum for the victory. Drew McIntyre was seen decimating everyone in the ring until the Celtic warrior (Sheamus) was released from the inner chamber and he went for Mycintre and they started exchanging blows. Sheamus overpowered him with a massive clothesline and the struggle for the victory continues.

Sheamus hits Kofi Kingston with the brogue kick and got him eliminated. MycIntre hits Jeff Hardy with the claymore kick and got him eliminated. McIntyre and Sheamus continued their rivalry in the ring and Sheamus was fully in control of the match punishing both McIntyre and AJ Styles. The struggle to capture the WWE championship continues as AJ Styles connected Sheamus with the phenomenal forearm to get him eliminated. AJ Styles then top rope and wanted to deliver the phenomenal forearm to MycIntre but the Scottish maneuvered and hit AJ Styles the claymore kick to pick the win.
Drew McIntyre wins the Elimination Chamber match to retain his WWE Championship

Shortly after his victory Bobby Lashley attacked him from behind. Bobby Lashley assaulted, victimized and brutalized MycIntre in the ring until he was completely down and out of strength.

The Miz Cashes-in his Money in the Bank Contract