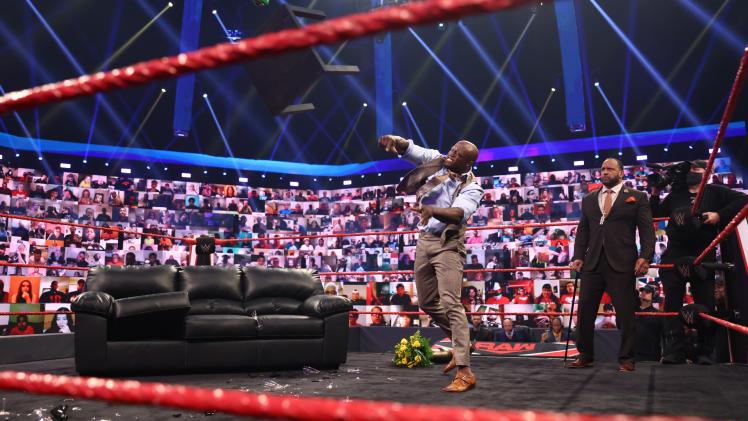 Things became more bizarre last night on Raw as The Almighty WWE Champion became furious and destroyed the MVP’s VIP lounge before vowing to end Kofi Kingston at Money in the Bank.

Raw kicked off with Bobby Lashley versus Xavier Woods in the ring while Kofi Kingston watched from the ringside. The match was hot but it ended in shock to the Almighty WWE Champion as Xavier rolled him up and successfully pinned him for the 3 counts to win the match.

The final episode of Raw last night saw MVP and 5 other women in the VIP Lounge celebrating and waiting for Bobby Lashley to join them in the lounge. When Bobby Lashley music hits the air, he made his way into the ring with huge furiousity.

Bobby Lashley reminded MVP about Kofi Kingston’s trash talk about him few weeks ago on Raw. Lashley made it clear to MVP that Kofi was correct when he said that MVP has made him to become soft.

Lashley said that he appreciated everything that MVP has done for him in his career, but he stood on the point that the celebration is over and that they have to get back to the business now.

The Almighty WWE Champion revealed that his ultimate goal now is to destroy whoever that steps into his path for the WWE Championship. He then destroyed MVP’s VIP lounge before he vowed to tear Kofi Kingston into half at Money in the Bank pay-per-view to end Raw.