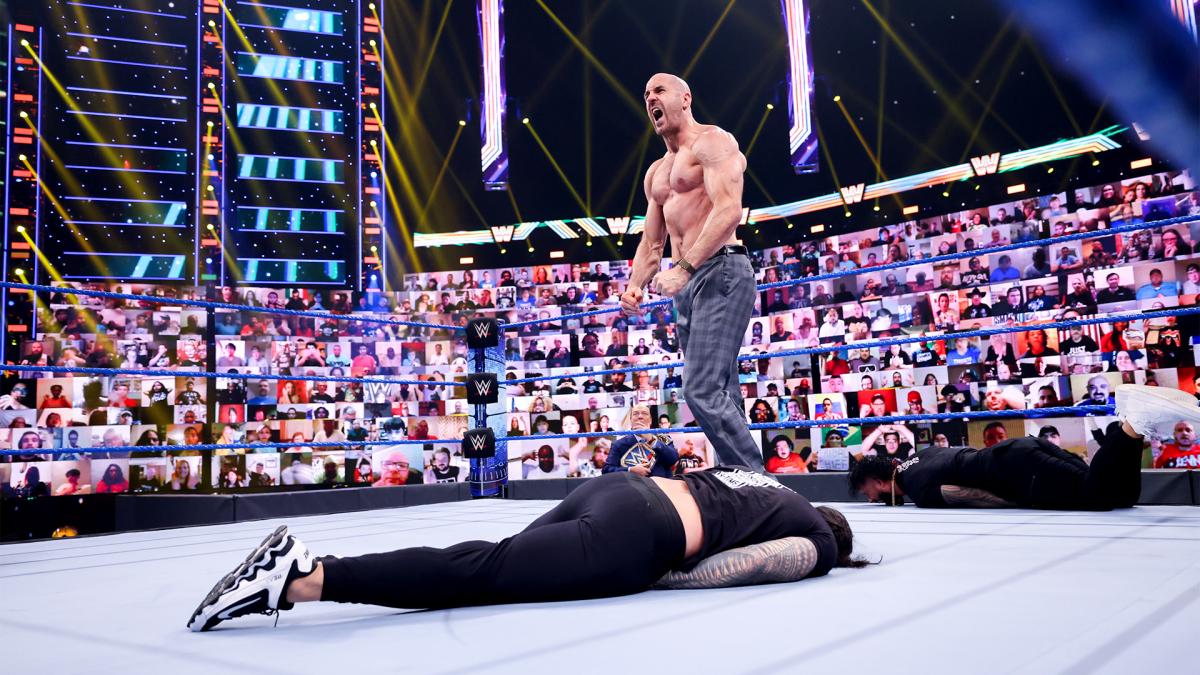 Tonight’s SmackDown kicked off with the throwback SmackDown sponsored by PROGRESSIVE inside the WWE thunderdome in USF’s Yuengling Centre at Tampa Florida.

Today’s edition of throwback SmackDown started at exactly 8/7 C on Fox. Below are the announced matches for tonight’s SmackDown.:

SmackDown kicked off with the recap of the WWE Championship match between Triple H and The Rock on August 26 1999 at the main event where Shawn Michael was the special guest referee and Tripe H won the match.

The Head of the Table ‘Roman Reigns’ kicked off the show and he made his way into the ring accompanied by his special counsel ‘Paul Heyman’ and his cousin ‘Jey Uso’.

Paul Heyman said that the Tribal Cheif has authorised him to eulogize the career of his victimized opponent with a 10 seconds silence. Heyman said that he doesn’t need the help of the time keeper and he made the 10 seconds counts with his mouth giving out a ” Dim Dim Dim” sound. This was the most hilarious moment on the show and it got Roman Reigns almost bursting out of laughter when Heyman started the counts.

Roman Reigns took the mic and bragged about how he fulfilled his words and did what he said he was going to do last week on SmackDown. Reigns said the whole world should be thanking him because he gave them what they needed. Roman Reigns then added that the whole WWE Universe should be grateful to him because he smashed, pinned and got rid of Daniel Bryan. Roman Reigns however, revealed that he had replaced Daniel Bryan with someone else that will acknowledge him, then Jimmy Uso music hits the air and he made his way into the ring.

Cesaro music hits and he stood at the entrance and argued that Roman Reigns can never replace Daniel Bryan. Cesaro made it clear that he doesn’t have time for Roman Reigns tonight because he has gotten his eyes on Seth Rollins. He continued his speech until was being attacked by Seth Rollins from behind then the WWE officials quickly rused out and separated them.

Teddy Long music hits and he stood at the entrance and made a declaration by the power vested on him by the WWE official ‘Adam Pearce’. Teddy said if Cesaro defeats Seth Rollins tonight on SmackDown then he would get the Title opportunity match against Roman Reigns at WrestleMania backlash. The show goes on a commercial break after Teddy left the thunderdome.

The match starts and Jimmy & Jey Uso watched from the ringside. Seth Rollins was seen decimating Cesaro as the show returns from the commercial break. Rollins punished Cesaro and pinned him for 2 counts two times. The match continues and Cesaro started fighting back with uppercuts but Rollins was able to overpower him. Cesaro finally fired up and started decimating Rollins with destructive uppercuts.

Back from the commercial break, Cesaro held Rollins with his submission move but Rollins was able to escape and pin him for 2 counts. Rollins lifted Cesaro and connected him with the bucklebomb but Cesaro instantly hit him with the clothesline and both men were down in the ring. Rollins shoved Cesaro out of the ring and immediately went out for him. Jimmy wanted to give Rollins an assist but Rollins rejected it and this made Jimmy to hit him a superkick. Cesaro immediately dragged Rollins into the ring and connected him with the Neutralizer to pick the win.

Cesaro def. Seth Rollins via pinfall and will face Roman Reigns at WrestleMania Backslash for the Universal Championship.

Seth Rollins met with Roman Reigns backstage and bitterly rant about how Jimmy Uso cost him his victory. Roman Reigns then said that he would clean up Jimmy Usos mess and take care of Cesaro at WrestleMania Backlash like he has always been doing to his challengers. He also added that he would handle his family issues then Rollins walked out on him in anger.

Jimmy and Jey USO met with Roman Reigns backstage. The Head of the Table bragged about bringing back Jimmy Uso and placing him in the spotlight on SmackDown. Reigns said that Jimmy messed up the opportunity and that he would have to treat him like a baby and clear his mess.

Jimmy Uso gave a surprising reply to Roman Reigns by saying that the Tribal Cheif cannot just talk to him the way he addresses his brother (Jey USO). Jimmy also added that he is nobody’s bitch before he walked out on Roman Reigns.

Ruby Riot hits Carmella with a shoulder attack and a kick to the midsection but Carmella fought back. Rubby Riot connected Carmella with a faceforce to the turnbuckle and decimated her before covering her for the 2 counts. The match continues untill Carmella finally held Ruby with the Code of Silence to stand tall as the winner of the match.

Bayley appeared in the ring and revealed that if you want to be a superstar in WWE then you must be a Champion. She added that she knows what she is saying as the undisputed longest reigning WWE Women’s Champion. Bayley celebrated the legends and Champions in the history of women’s division and praised them for laying down legacies and path for other women to follow. The legends Bayley mentioned include Lita, Alundry Balonze, Trust Beth, Statis Phoenix, Ivory and Holly Molly.

Bayley added Bianca Belair to the list and accused her of being naive, blind and non focus. Bayley said Bianca is not up to her level because all she sees in her is insecurity. Bayley further assured the WWE Universe that she would not just be Bianca’s first Challenger but the last. Bayley threatened to destroy Bianca and take her Title when they clash WrestleMania Backslash. She continued her speech until Bianca music interupted her.

Bianca hits the ring and said that Bayley should allow her enjoy her Title reign. Bianca maintained in her statement that she would leave WrestleMania Backlash still the SmackDown Women’s Champion. Both women clashed in the ring after long term argument but Bayley stood tall and left Bianca in an agony of pain in the ring.

The initial match card for the show was Rey Mysterio versus Dolph Ziggler but Ziggler disrespected Dominik when he accompanied his Dad into the ring. Ziggler said Dominik doesn’t belong to WWE and he doesn’t worth to be in the ring with him. This made Dominik challenge him for a match and it was made official.

The match begins and Dominik slapped Ziggler and drived him out of the ring with a dropkick. Ziggler fired up and hit Dominik with a neckbreaker in the ring and covered him for 1 count. The match continued untill Dominik skillfully wrapped and pinned Ziggler then the referee made the 3 counts.

Termina attempted a superkick on Reginald but he instantly noticed and escaped it. The match was really a fabulous one, filled with drama as Reginald continued to have fun by displaying series of acrobatic moves to frustrate Tamina. Termina finally took him out with a superkick and toprope for a splash but Nia Jax quickly dragged him out and the match was cancelled.

Nia Jax & Bazsler decimated and wrecked Tamina & Natalya before they walked out of the thunderdome.

Jey Uso chastised Jimmy Uso about the way he talked to Roman Reigns and walked out on him. Jey made it clear to Jimmy that he is not Roman Reigns bitch and that everything he has been doing for the Tribal Chief is for the family love. Jimmy said that Roman Reign has been benefiting a lot from Jey and that needs to stop because he is back to the show and needs Jey more than before. Jimmy ended his statement by saying that it will be perfect and ideal if he be becomes the SmackDown Tag Team Champion alongside with Jey.

Chad Gable and Dawkins kicked off the match and both men were building up huge momentum in the ring. Montex made a tag and Apollo also got into the ring. Sami Zayn hit the ring after making a tag and decimated montex but he was later overpowered with a dropkick from Montex. The match continues with Corbin and Big E in the ring and both men hit themselves with a clothesline. Chaos broke out and all the 10 men clashed outside the ring as the show goes on a commercial break.

Back from the commercial break, Otis was seen brutalizing Kelvin Owens in the ring. Apollo made a tag but he was quickly taken out by Kelvin Owens then the match continues with Nakamura and Sami Zayn in the ring. Nakamura domintaed the match and was at the point of winning before Corbin ruined his moment. The match became heated up and ended in Corbin connecting Nakamura with the End of Days to pick the win for his Team.

Roman Reigns, Jey Uso and Paul Heyman hits the ring to decide where Jimmy Uso stands. Roman Reigns got the mic and wanted to talk but he was interupted by Jimmy’s music. Jimmy made his way into the ring and reminded the WWE Universe about how Roman Reigns forcefully manipulated him to acknowledge him as the Tribal Cheif last year at Hell in the cell in a ‘I Quit Match’.

Roman Reigns replied him by saying that he is no longer stuck to the past as he has moved on alongside with his brother Jey. Jimmy walked out of the ring and Jey went after him and begged him to acknowledge Roman Reigns as the Head of the Table.

Cesaro suddenly appeared from behind and attacked Roman Reigns. Jey Uso ran into the ring to save Roman Reigns but Cesaro overpowered him with an uppercut. Jimmy also hit the ring to attack Cesaro but he ended up getting a destructive uppercut from Cesaro. Cesaro then connected Roman Reigns, Jimmy & Jey Uso with the Neutralizer to end the show.