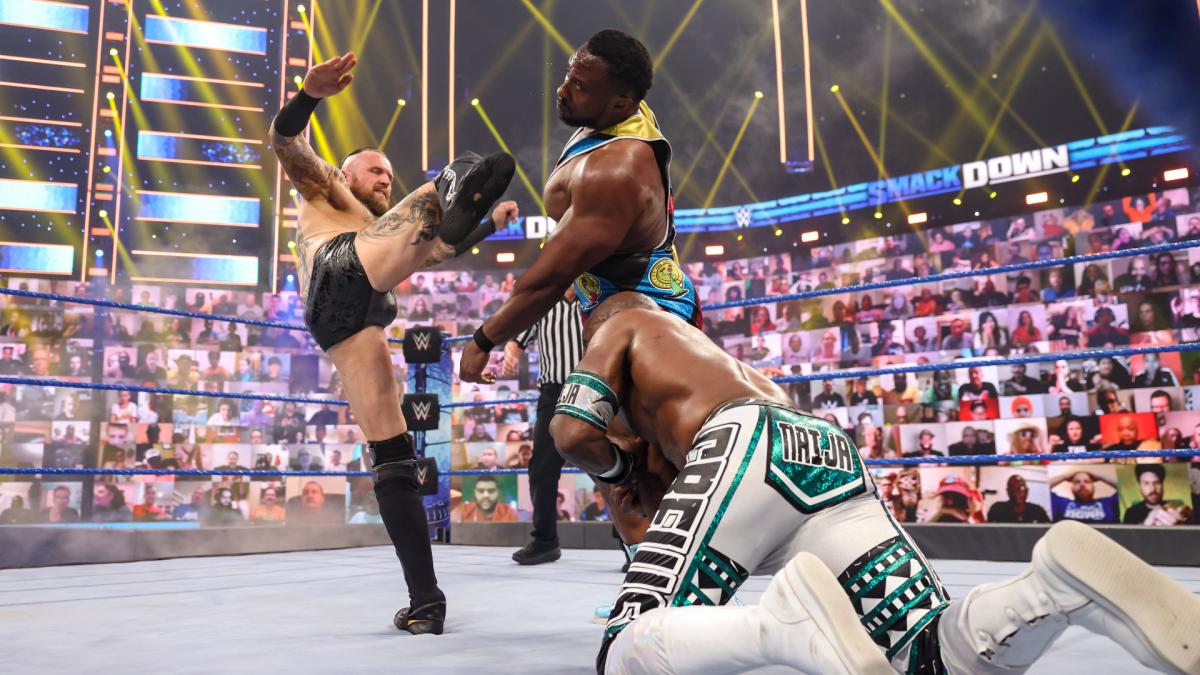 SmackDown kicked off at exactly 8/7C on Fox and it was broadcast inside the WWE thunderdome at USF’s Yuengling Center in Tampa Florida.

SmackDown kicked off with the Champions in the Blue Brand having a good time celebrating their Titles at the entrance.

We've got A LOT of gold on the stage to kick off #SmackDown!

Sonya Deville kicked off the show and she stood in the ring and officially announced that WWE will be leaving the thunderdome and begin live tour starting from July 16.

She then eulogized the Champions in the Blue Brand as they stood at the entrance. Sonya praised Rey Mysterio & Dominik Mysterio for becoming the first ever father & son Tag Team Champions in WWE. She also celebrated Bianca Belair, Natalya and Tamina for their Titles win.

When Sonya celebrated Apollo Crews and annouced that he would be defending the Intercontinental Championship tonight on SmackDown, Apollo became furious and acused Sonya of disrespecting him. He then vowed to survived the odds against him tonight and retain his prescious Intercontinental Title.

Paul Heyman boasted that Roman Reigns is the only pre-eminent Champion in WWE and all sport entertainment. Heyman then added that the Tribal Chief will not come out now but will do that on his own convinience on SmackDown. Heyman left the thunderdome and Sonya continued her speech.

Bayley hits the ring and accused Sonya of being partial by not celebrating and acknowledging her as the longest reigning SmackDown Women’s Champion. She slammed Bianca with an abusive words and this made Bianca to head to the ring for her. Shayna Bazsler and Nia Jax attacked Binaca from behind. Tamina & Natalya entered the ring and clashed with Nia & Bazsler untill the show goes on a commercial break.

Back from the commercial break, the match begins with Nia Jax and Tamina in the ring but Nia was in total control. Bazsler and Bayley made a tag and decimated Tamina.

Bayley held Tamina and wanted to connect her with a suplex but Tamina countered it and hits her with a destructive suplex.

Natalya made a tag and hits Bayley with 2 Suplex before she was being overpowered by the irrestible forces of Nia Jax and Bazsler. The match continued with Bianca and Bayley in the ring untill the show goes on a commercial break.

.@BiancaBelairWWE shows exactly why she's the #EST, but has she pushed herself too much? #Smackdown pic.twitter.com/NlR178QflQ

Back from the commercial break, the match continued with Bayley and Bianca and Bayley was in charge. Bianca escaped and tagged Tamina into the ring. Tamina hits Bayley with a powerslam and tagged Natalya into the ring. Natalya connected Bayley with a suplex and the match continued. All the six women clashed in the ring and the struggle for the victory came to an end when Bazsler captured Natalya with the Kirifuda Clutch to secure the victory.

Baron Corbin hits the ring and a video clip of Nakamura driving around the town and hanging out with his cat using Baron Corbin’s crown was played. Corbin angrily held the mic and said that he had come to SmackDown tonight to make his actions speak louder than his voice but the video clip just played is a total disrespect to his royalty.

Corbin called out Nakamura and threatened to break every of his body tonight before getting back his crown. Nakamura music hits and he was accompanied into the ring by a rock guitarist called ‘Bugez’, then the show goes on a commercial break.

Back from the commercial break, the match kicked off and Corbin was in full control. Corbin hits Nakamura with a powerbomb and covered him for 2 counts.

Bugez distracted Corbin with his electric guitar and Nakamura took advantage of the distraction and successfully pinned Corbin for the 1-2-3 counts to win the match. Nakamura walked out of the thunderdome with Corbin’s crown again as the match ends.

Roman Reigns appeared in the ring and said he has always known himself to be a humble man. He then gave Paul Heyman the opportunity to celebrate him.

Heyman took the mic and narrated how Roman Reigns has been a remarkable strong wrestler and dominant Champion since he returned to WWE. He talked about how Roman Reigns victimized and defeated Bray Wyatt, Braun Strowman, Kelvin Owens, Jimmy Uso, Daniel Bryan, Edge and Cesaro.

Heyman made it clear that Roman Reigns title defense at WrestleMania 37 was not a Triple Threat match but an Handicap match against the Tribal Chief. He said that Reigns took control of the match and pinned both Bryan and Edge to retain the Universal Championship in an incredible way. Heyman also bragged that Roman Reigns banished Daniel Bryan from SmackDown and wrecked Cesaro at WrestleMania Backlash without any assistance from anyone.

Roman Reigns asked Heyman to get him Jimmy Uso after Heyman had concluded his speech. Heyman immediately authorized that Jimmy’s music to be played but Cesaro music hits instead. Cesaro stood around the barricade and demanded a rematch against Roman Reigns at Hell in the Cell for the Universal Championship. Cesaro continued his speech until Seth Rollins came from behind and attacked him.

Seth Rollins suddenly appeared and brutally attacked Cesaro. He caused more damages to the injured arm of Cesaro and connected him with 2 Stomps before he left the thunderdome.

Roode decimated Dominik with 2 Suplex as the match kicks off. Dominik skillfully rolled up Roode and pinned him for 2 counts.

Dominik fired up and started gaining control of the match. He hits Roode with a cross body from the top rope.

Robert Roode ran into the steel post with a shoulder force when he wanted to attack Dominik. Dominik immediately hit him with the 619 and delivered a thunderous splash on him from the top rope to stand tall as the winner of the winner of the match.

The match kicked off and all the four men clashed in the ring. Big E took control of the match and he wrecked both Apollo and Zayn with a massive splash at the apron. Kelvin Owens immediately hit him with a high dive outside the ring as the show goes on a commercial break.

Apollo hits Kelvin with 3 German Suplex and covered him but Big E prevented him from winning. Apollo dropped Kelvin Owens with an AA and Big E instantly hit him with the spear at the entrance, then the show goes on a commercial break.

Back from the commercial break, Apollo Crews decimated Big E with a suplex inside the ring and covered him for 1 count. Big E fired up and connected everyone in the ring with a belly-to-belly suplex untill he was being overpowered by Zayn. Big E hits Apollo & Zayn together with a German Suplex and Kelvin Owens caught him with a splash from the top rope.

The match eventually ended when Aleister Black made a shocking return and attacked Big E with a kick, then Apollo successfully pinned him for the 3 counts to retain his Title. This is where SmackDown went to an end.