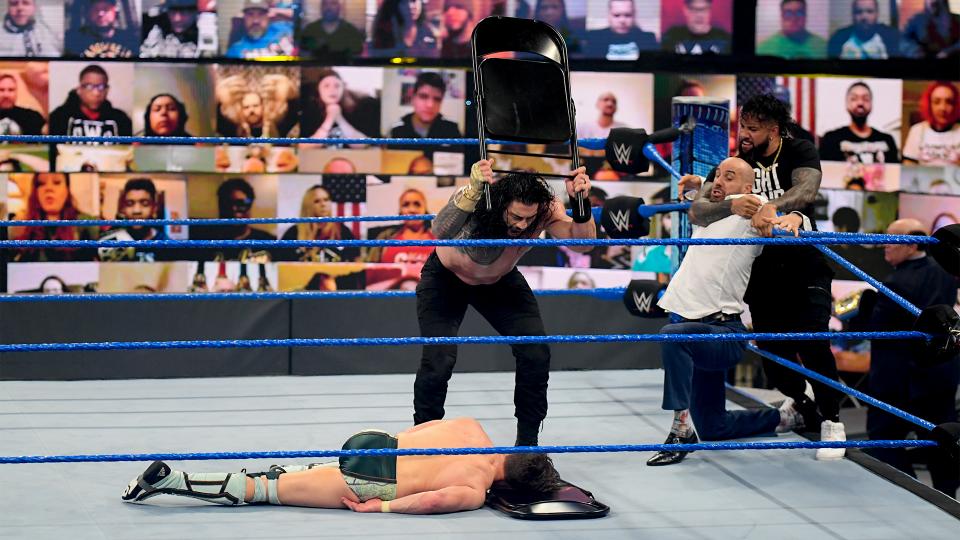 Tonight’s SmackDown kicked off at exactly 8/7C on Fox inside the WWE thunderdomeat USF’s Yuengling Centre in Tampa Florida.

Today’s Friday night SmackDown is sponsored by PROGRESSIVE Insurance and the following are the matches that have been announced to take place tonight:

Micheal Cole and PAT McAfee welcomed the WWE Universe into SmackDown and announced the Championship matches that will take place tonight on SmackDown.

The SmackDown Women’s Champion ‘Bianca Belair’ kicked off the show and she made her way into the ring in a majestical way. Bianca welcomed the WWE Universe to SmackDown. Robert Roode and Dolph Ziggler music hits and interupted Bianca’s speech. The Street Profits music hits and they walked to the ringside. Bayley music was played thereafter and she made her way into the ring and clashed with Bianca. The Street Profits, Roode and Ziggler joined them in the ring and they all clashed as the show goes on a commercial break.

Back from the commercial break, the match kicks off with Bianca and Bayley in the ring and both women were building up huge momentum in the ring. Bayley hits Bianca with a clothesline. Bianca countered another attack from Bayley and skillfully pinned her for the 2 counts. Bianca hits Bayley with a dropkick and Ziggler made a tag. Dawkins and Montex hits the ring and shoved Ziggler and Rhoode out of the ring. Montex hits Ziggler and Roode with a high dive outside the ring, Bayley drived Bianca through the steel step and the brawl continues inside the ring.

The match continues and Roode was seen decimating Montex in the ring. Ziggler made a tag and he continued capitalising punishment on Montex. Montex fired up and connected Ziggler with a superkick to the mouth. Dawkins got into the ring after tagging Montex and he unleashed his fury on both Ziggler and Roode. The brawl continued untill Bianca whiped Roode with her long hair then Dawkins hit him with a spinebuster and Monetex connected him with a thunderous splash from the top rope to pick the win.

The match kicked off and Reginald watched from the ringside. Tamina took control of the match at the early moments after taking down Nia Jax. Tamina ended up in Nia Jax’s knees when she top rope to hit Jax with a splash. Nia Jax quickly draged Tamina and covered her for 2 counts. Bazsler made a tag and attempted to break Tamina’s arm but Tamina repelled it and hits her with a slam.

The match continues with Natalya and Bazsler in the ring, Natalya hits Baszler with a German Suplex and covered her for 2 counts. Nia Jax made a tag and she clashed with Tamina in the ring. Tamina toprope to hit Jax with a splash but Reginald caused a distraction and ruined her moment. The struggle for the victory continues until Tamina finally toprope and connected Bazsler with a superfly splash to secure the win.

Apollo Crews (c) vs. Big E for the Intercontinental Championship

Big E was the first man to appear in the ring. Apollo Crews joined him thereafter and he was accompanied by Commander Azeez.

Back from the commercial break, Apollo Crews was seen dominating the match but Big E quickly recovered and delivered a German Suplex to Apollo. Apollo fired up and shoved Big E out of the ring then hits him with a high dive outside the ring. Their brawl continued inside the ring and Big E displayed toughness and strongest by igniting and hitting Apollo with a splash to cover for the 2 counts.

The match got more intense and Big E hits Apollo with his finisher and covered him but Commander Azeez quickly dragged Big E out of the ring when the referee was about to complete the 3rd counts. Commander Azeez then drived Big E through the steel post and the match was cancelled.

The match was cancelled and Apollo still retains the Intercontinental Champion.

After the match ended, Kevin Owens ran into the thunderdome to fight commander Azeez and Big E also joined him in the fight. Sami Zayn hits the ring thereafter and gave an assist to Commander Azeez in order to take out Kelvin Owens and Big E. Commander Azeez hits Sami Zayn with the Nigerian Nail to thank him for intervening in their brawl.

Daniel Bryan was the first man to make an entrance into the ring. Roman Reigns debut a new theme song and he made his way into ring accompanied by his special counsel ‘Paul Heyman’.

Bryan hits Reigns with a dropkick to the ring corner as the match kicks off but Roman Reigns fights back with an uppercut. Bryan attempted the Yes Lock on Reigns but Reigns repelled it by rolling out of the ring. Bryan hits him with a running knee outside the ring then the show goes on a commercial break.

Back from the commercial break, Bryan is in control of the match. He decimated Roman Reigns with 2 running knees to the ring corner but Reigns repelled the third one with a destructive clothesline. Roman Reigns dragged him up and headbutt him multiple times. Bryan tried to fight back but Reigns took him out with an elbow attack and pinned him for 2 counts. Bryan recovered and dragged Reigns to the ring corner for severe punishment but Reigns ended up powerbombing him from the top rope. Roman Reigns then covered him for the 2 counts as the show goes on a commercial break again.

Back from the commercial break, Roman Reigns was seen unloading punishment on Bryan outside the ring. The match continues inside the ring and Roman Reigns started punishing Bryan with a knee attack to the ring corner. Bryan tried to fight back but the Big Dog overpowered him with a Samoan drop then cover him for 2 counts.

Bryan fired up and shoved Reigns out of the ring. He then attempted a high dive on Reigns outside the ring but he ended up getting a suplex from Roman Reigns. Roman Reigns wanted to deliver a spear on Bryan but Bryan escaped it and Roman Reigns crashed into the barricades hen the show goes on and commercial break.

Back from the commercial break, Bryan toprope and hits Reigns with a splash on the arm and covered him for just 2 counts. Reigns connected Bryan with the superman punch and pinned him for the 2 counts. Bryan finally delivered the running knee on Reigns but Reigns kicked out of 2 counts. Daniel Bryan connected Reigns with the Yes Lock but Reigns countered it.

Roman Reigns hits Bryan with the spear and Bryan surprisingly kicked out of 2 and half counts. Daniel Bryan connected Reigns with the Yes Lock but Reigns survived it and smashed him in the middle of the ring. The match continues until Roman Reigns held with his submission move then Bryan fades and passed out.

Roman Reigns def. Daniel Bryan via submission to retain the Universal Championship and get him banished from Smackdown.

Roman Reigns grabbed 2 steel chairs to decimate Bryan after the match ended but Cesaro quickly ran into the ring and rescued Bryan. Cesaro drived Roman Reigns out of the ring with multiple uppercuts until Jey Uso came and fought for his cousin.

Roman Reigns eventually fulfilled this mission by hitting Bryan with a steel chair inside the ring and Cesaro was captured to the ring rope by Uso then the show goes to an end.