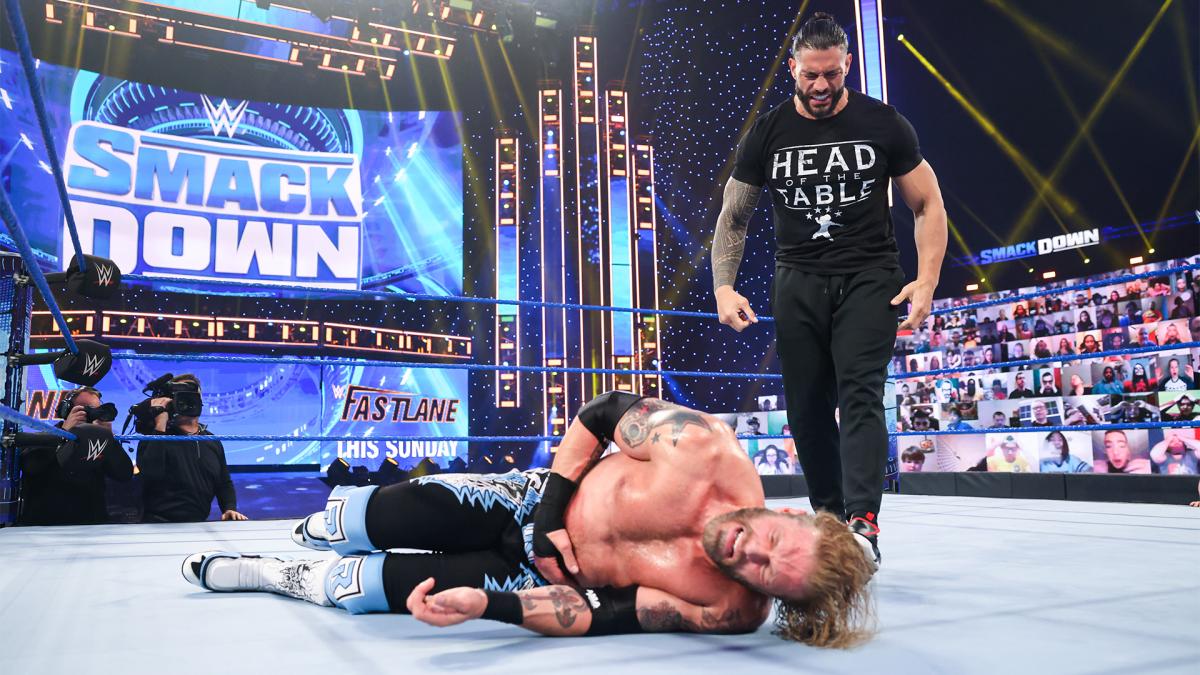 Tonight is the last SmackDown before WWE Fastlane and it kicked off at exactly 8/7C inside the WWE thunderdome streaming live from Fox.

Tonight’s SmackDown is sponsored by PROGRESSIVE and in the show:

The legit boss ‘Sasha Banks’ kicked off the show as she makes her way into the ring to defend the SmackDown Women’s title against Nia Jax.

Nia Jax was accompanied into the ring by her Tag Team partner ‘Shanya Baszler’ and the match was kicked off officially.

The match begins and Sasha Banks was in control of the match as she also takes out Shanya from the ringside with a dropkick. Sasha Banks attempted the bank statement on Nia Jax but Nia repelled it and the match continues.

Nia got ignited and she started fighting back, she hits Sasha with a Samoan drop and pinned her for 2 counts then Bianca music hit the air and she came to the ringside to encourage Sasha Banks and also watch the match as the show goes on a commercial break.

Back from the commercial break, the match continues and Sasha Banks was seen trying to fight back but she was overpowered by Nia Jax. Nia Jax capitalised attack on the leg of Sasha then hit her with a face force on the turnbuckle and pinned her for 2 counts. Sasha fired up then hits Nia Jax with a DDT and connected her with the bank statement.

Shanya Baszler then entered the ring to attack Sasha but she ended up hiting Nia Jax with kick to her chest. Bianca entered the ring and shoved Baszler out of the ring. Sasha Banks took advantage of the opportunity and successfully pinned Nia for the 3 counts to retain her title.

Seth Rollins complained about being disrespected on SmackDown

Seth Rollins talked about returning to SmackDown and how the entire roster treated him like a king when the surrounded the ring to honor his return. He, however, said that he was disappointed when they turned their back on him and walked out on him.

Rollins was specific about Cesaro taking things to the extreme by disrespecting and embarrassing him on SmackDown. Seth Rollins accused Cesaro of being jealous of his successes and accomplishments in WWE. He labelled Cesaro as the biggest waste of potentials in the history of WWE and he continued to rant untill Nakamura’s music interrupted him.

Seth Rollins warned Shinsuke Nakamura never to disrespect him like Cesaro did but Nakamura turned the deaf ear. He grabbed the microphone from Seth Rollins and told him to shut up. Nakamura then shoved him out of the ring and hit him with the Kinshasa.

The match begins with Montex and Dominik in the ring and both men were building up huge momentum and displaying fantastic athleticism. Dominik tagged Rey into the ring and Rey hit Montex with a dropkick. Montex fired up, tagged Dawkins and he started dishing out punishment to Rey Mysterio.

The struggle for the victory continues untill Dominik skillfully pinned Dawkins for the 1-2-3 counts to secure the win.

After their victory, Otis and Gable hit the ring and mocked Rey Mysterio for being crushed by Otis like a pancake few weeks ago on SmackDown. They continue their speech until they were shoved out of the ring by Rey and Dominik. Then Dominik hits them with a high dive outside the ring and the show goes on a commercial break.

The match kicked off after the commercial break and Rey Mysterio was seen taking control of the match. He delivered the 619 to Gable then top rope to connect him with a splash but he was attacked by Otis while he was on the top rope. Gabble then tagged Otis into the ring and he continued to inflict painful punishment on Mysterio.

Rey Mysterio ignited and tagged Dominik, then Otis tagged Gable and the both men clashed in the ring. The brawl between the four men continued until Gable hit Dominik with a suplex and Otis connected him with a destructive forward splash from the turnbuckle and pinned him for the 3 counts.

The match kicked off and Zayn was in control at the early moments but Corbin fired up and hit him with a clothesline then continued to decimate him. The match was a very short one as Corbin suddenly connected Zayn with the end of the days finisher to secure the victory.

After the match, Zayn went to the commentary section and asked Kevin Owens if he suspected any conspiracy against him in the match then Owens replied him by saying that the match was a very clean one and the referee was fair at his job. Sami Zayn became angry and hits Kevin Owens with the hulumber kick and walked out of the thunderdome with his cameraman.

The Intercontinental Champion ‘Biggie’ spoke about being brutalized with a steel step by Apollo Crews few weeks ago on SmackDown and he vowed to break and end Apollo in 2 days time at WWE Fastlane.

Apollo Crews replied Biggie by saying that Biggie has disrespected him and anyone that disrespects the Nigerian Royalty will always end up being destroyed and he would do the same thing to Biggie at Fastlane and become the new Intercontinental Champion.

After Apollo’s speech, both men left the interview backstage and clashed at the Tropicana field but the brawl was later controlled and calmed by the WWE officials and other refrees.

Bianca was the first to appear in the ring while Baszler joined her in the ring as she was accompanied by her Tag Team Partner (Nia Jax) who also watched the match from the ringside.

Edge returned into the ring again on SmackDown after 10 years while Daniel Bryan watched the match from the commentary section.

The match begins and the ultimate strategist was dominating the match and decimating Jey Uso. Jey Uso fired up and crushed Edge into the steel step and to the announce table as you show goes on a commercial break.

Back from the commercial, the match continues and Uso was in control. Uso hit Edge with a rib force to the post and continued to inflict painful punishment to Edge. Edge tried to fight back but Jey keeps capitalising attack on his injured ribs. Both men had a collision and they were both down in the ring.

Edge got ignited and started fighting back. He wanted to spear Uso but Uso repelled then hit him with a DDT and connected him with the forward splash from the top rope and pinned him for 2 counts Edges recovered then speared Uso and pinned him for the 3 counts

Edge def. Jey Uso to become the special enforcer at the ringside for the Universal title match at Fastlane.

Roman Reigns came from behind and speared Edge after the match. Daniel Bryan then stood up from the commentary section to go get Roman Reigns in the ring but he was attacked by Uso at the ringside. Uso then dragged him into the ring and Roman Reigns hit him with a massive spear to stand tall as the ultimate head of the table as the show goes to an end.