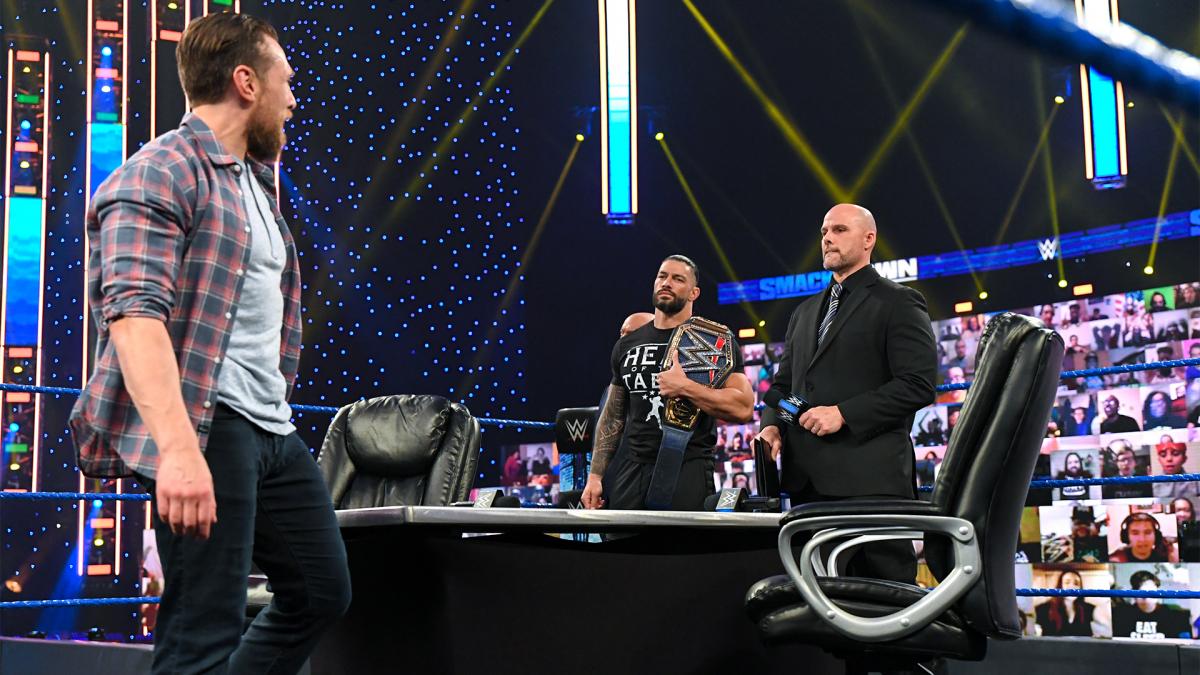 Tonight’s Friday night SmackDown is sponsored by PROGRESSIVE and it will kick off by 8/7C inside the WWE Thunderdome at Tropicana field, Florida.

Edge music hits and he kicked off the show as he makes his way into the ring. He talked about choosing Roman Reigns as his main event opponent at WrestleMania and Daniel Bryan coming into his business. He also spoke about Daniel Bryan claiming that he deserved to be in the main event of WrestleMania owing to the fact that he loved the business and wrestled more than every other superstars in the last 3 months. Edge said he had wrestled very hard against legends like Johncena, Randy Orton, Undertaker, Batista and so on in his career with WWE and this shows that he really loved the buisness. He continued his speech until Daniel Bryan music interupted him.

Daniel Bryan hits the ring and grabbed the microphone. He said he does respect what Edge has gone through in his career with WWE. Bryan then maintained that he would do everything possible within his capability to defeat Roman Reigns at Fastlane and find his way to the main event of WrestleMania. He also claimed to be the best at the end of his speech.

Edge replied Bryan by saying that he respected him for the struggle for the title shot but he insisted that Bryan shouldn’t have gotten into his business. Edge added that Roman Reigns defeated Bryan at Elimination Chamber and there is no doubt about it as a win is a win. Edge argued that Bryan is not better than him because he went through 29 other superstars at Royal Rumble, lasted for about 60 minutes and emerged as the winner of the match in which Bryan was also included in the match.

The team of the Street Profits were the first to make their entrant but they were all attacked by the team of Bobby Roode at the ringside before the match started as the show goes on commercial break.

Back from the commercial break, the match starts with Dawkins and Bobby Roode in the ring and they were both displaying high athleticism. Dawkins hits Bobby Rhoode with a clothesline and tagged Dominik into the ring. Rhoode tagged Otis into the ring and Otis started decimating Dominik as the brawl continues.

Dolph Ziggler hits Montex with a dropkick and continued to take control of the match. Montex tried to fire up but he was taken down and locked on the neck by Ziggler. Ziggler tagged Bobby Roode and they continued to dish out painful punishment to Montex. Gable was tagged into the ring and Montex luckily escaped and tagged Rey Mysterio. Rey Mysterio was fully charged up and he started unleashing his fury on every team of Bobby Roode both inside and outside the ring.

The struggle for the win continues until Dominic and Rey Mysterio connected Bobby Roode with double 619 and Montex delivered a massive splash on him from the top rope and successfully pinned for the 3 counts.

When the match was about to start, Seth Rollins music hits the air and he brought a steel chair and sat at the entrance to watch the match.

The match starts and Cesaro connected Murphy with multiple uppercuts and continue to dominate the match. Cesaro shoved Murphy out of the ring and went after him. Murphy got fired up and hits Cesaro with a knee to the face. Cesaro recovered then dragged Murphy to the ring rope and connected him with a superplex from the top rope. The brawl for the victory continues until Seth Rollins came into the ring and attacked Cesaro to ruin the match.

Seth Rollins attacked Cesaro from behind and hits him with 2 stomps. He then went out of the ring, grabbed a steel chair and inserted it into the neck of Cesaro lying helplessly in the ring. Rollins then wanted to hit him with the third stomp but he was stopped by the WWE official and other referees in the ring.

The match was cancelled and ended in no contest

Kevin Owens welcomed everyone into the show. He said people have been wondering about his absence on the show for the past few weeks. He added that he had been facing a lot since his absence on SmackDown both physically and mentally. He however stated that tonight is not about him but about his guest which include the EST of WWE’ Bianca Belair’ and her main event opponent at WrestleMania ‘Sasha Banks’. He welcomed them into the show and they made their way into the ring. Kevin Owens said it is obvious that they are going to make history at WrestleMania when they clash for the SmackDown Women’s Championship.

Sasha banks and Bianca Belair argued for the supremacy. Sasha Banks claimed that she is the best of the best and that she would have stopped Bianca from winning the Royal Rumble match if she was added to the match. Sasha maintained that she would walk out of WrestleMania as ‘2 Belts Banks’ after defeating Nia jax and Shanya Baszler at Fastlane and retaining her title against Bianca at WrestleMania. They continued their argument until they were interrupted by Nia Jax, Shanya Baszler, Reginald, Natalya, and Tamina as the show commercial break.

The match starts with Tamina and Sasha Banks in the ring and Tamina quickly tagged Natalya into the ring while Nia Jax, Shanya Baszler and Reginald watched from the commentary section.

Natalya started controlling the match and continued to inflict painful punishment on Sasha Banks. Sasha fired up and tagged Bianca. Bianca connected Natalya with a spinebuster and continued to dominate the match. The struggle for the victory continues until Reginald caused a distraction and Tamina skillfully pinned Bianca to pick the win.

The reigning Intercontinental Champion ‘Biggie’ spoke about the damages that Apollo Crews caused him by making him go through medical rehabilitation following the brutal attack on him. He said that Apollo is non apologetic to fix the problem that he has caused. Biggie then made it clear in his statement that Apollo have stepped on his toes and that he would bulldoze his house. He added that he would bring an end to Apollo. Biggie than called out Apollo to come and get the title match that he had been demanding for but Apollo never showed up.

Biggie then offered an open challenge to anyone in the locker room that is interested in the Intercontinental Championship. Baron Corbin and Sami Zayn came out but Zayn maneuvered and got himself into the match for the intercontinental championship.

Biggie took control of the match at the early moments, dishing painful punishment to Sami Zayn. Sami Zayn fired up and started fighting back, he hit Biggie with an elbow on the head and pinned him for 1 count.

Biggie fired up and connected Zayn with 2 belly-to-belly suplex. Zayn ran out of the ring, Biggie went after him and grabbed him to the ring to hit with a splash but Sami Zayn dodged it and the show goes on commercial break.

Back from the commercial break, Sami Zayn connected Biggie with a massive sunset bomb from the top rope and pinned him for 2 1/2 counts. Biggie fired up and hit Zayn with a destructive clothesline. He then delivered his finisher on Zayn and pinned him for the 3 counts to retain the tittle.

Immediately after the match, Apollo Crews music plays and he attacked Biggie from the behind. He then head outside the ring, grabed the steel step and assault Biggie with it again.

The WWE official Adam Pearce introduced the contract and ask who was going to sign it first. Daniel Bryan was the first person to sign the contract and he did it with full confidence and determination.

Roman Reigns was reluctant about signing the contract at first but when Bryan’s words got into his head he got the contract signed.

Daniel Bryan made it clear that he would walk out of Fastlane as the Universal Champion by making Roman Reigns tapout the way he made Jey Uso quit the steel cage match last week on SmackDown.

Edge music hits and he demanded for a match against Jey Uso next week on SmackDown with the condition that whoever that wins the match will be the special enforcer at WWE Fastlane.

After Edge’s speech the four men clashed in the ring . Roman Reigns and Jey Uso were shoved out of the ring, Brian then attacked Edge with a running kick to end the show.