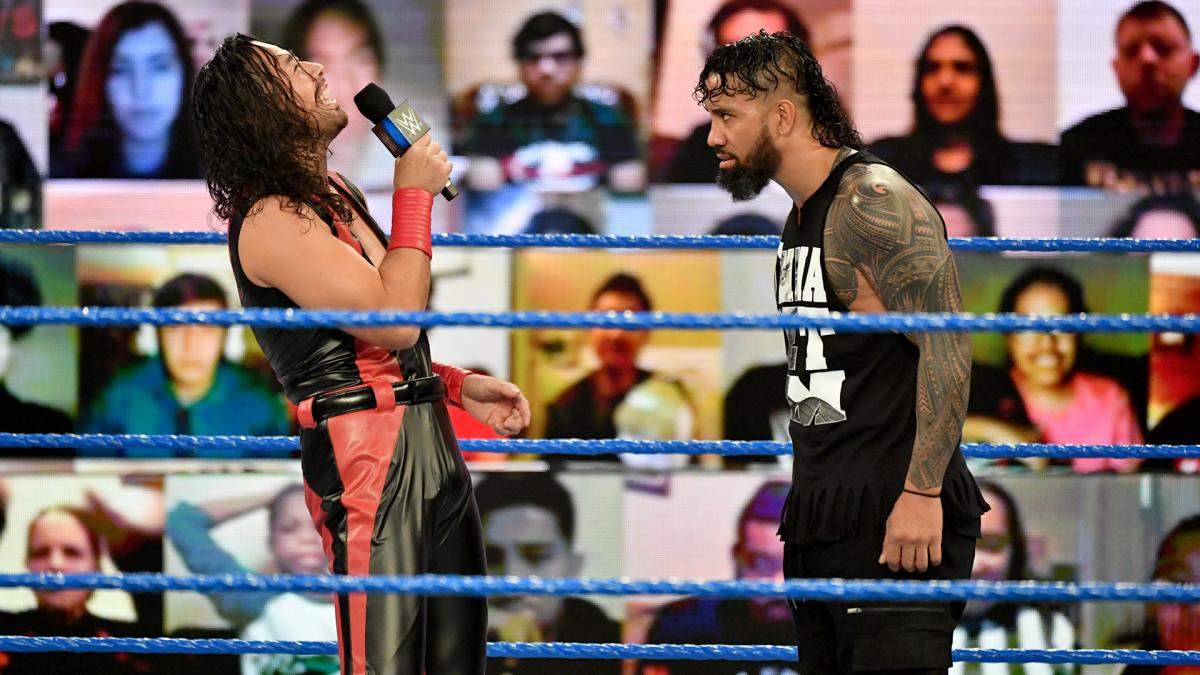 Tonight SmackDown will kick off at 8/7 on Fox and it will be featuring some incredible matches and contract signing so as to prepare for the coming Royal Rumble pay-per-view matches.
In tonight’s Smackdown show;

The show kicks off with Roman reigns and Paul Heyman at the backstage discussing about the universal championship contract signing tonight.

Jey Usos music plays and he made his way into the ring to open the show. He welcomed everyone to the show and claimed that himself and his family are in total control of the blue band. He said no other person is in charge of the show not Kevin Owens or any other Superstar. He said he is going to win the Royal rumble and dominate the whole show. Jey Usos also added that Nakamura should be thanking him and his cousin Roman reigns for making him survive.

Nakamura music kicks off and he makes his way into the ring. Nakamura stated that “If your cousin Roman reigns is a big dog then that means you are his little puppy”. Jey Usos became angry and wanted to attack Nakamura but Nakamura was successfully able to resist the attack and gave him a kick right in his head.
Back from commercial break the match begins and Jey was dominating the match with several kicks and incredible in-ring actions. Nakamura fired up and started inflicting a lot of punishment on Jey Usos. Cesaro music kicks off and he walked to the comment section so as to watch his friend as he continues to decimate Jey Usos. The brawl continues and Nakamura delivered a running kick right on the face of Jey Usos for the 3 counts and won the match.
Winner : Nakamura ( via pinfall)

Adam Pearce signs the Royal rumble universal championship match contract backstage and Paul Heyman made it known to him that the match will be the biggest in his whole career and it is going to be a No Disqualification Match.

The match began and Corbin was decimating and punishing Mysterio at the early moment of the match. At some point Mysterio became fired up and started attacking and decimating Corbin. Baron Corbin was able to stand tall at the end of the match through the distraction caused by Dominic Mysterio.
Winner :Baron Corbin (Via pinfall)

Barley welcomes everyone to her new show called ‘The Ding Dong Hello Show”. Sheinvited Bianca Blair as her special guest to the show. They both argued for supremacy in the women’s division but Barley seems not to be backing down and she challenged the barlier to a fight in the next smackdown to prove herself as the only legend in the blue band. The good news is that Bianca accepted her challenge and the match is scheduled to hold next week smackdown.

Daniel Bryan music kicks off and he makes his way into the ring. Cesaro joined him in the ring and the match starts. Daniel Bryan was performing an incredible in-ring action by decimating and inflicting painful punishment on Cesaro. Cesaro fired up at a point and started to dominate the match but Bryan was able to resist his attack and continued to dominate the match as he started initially. The brawl continues and both superstars were battling for victory but at the end of the match Cesaro stood tall and won Bryan for the 3 count.
Winner : Cesaro (via pinfall)

The match started and both superstars were constantly getting fired up, decimating each other with several attacks but at the end of the match, Apollo crew was able to successfully pin Sami for the 3 count and won match.
Winner : Apollo Crews (via pinfall)

Roman reigns music kicks off and he majestically makes his way into the ring, accompanied by Paul Heyman and his cousin Jey Usos. Adam Pearce walked into ring and they both made the title match official as they signed the contract for the universal championship match at t Royal Rumble.

Adam Pearce walks out of the Ring and standing at the entrance, he said he won’t be able to battle with Roman reigns anymore at Royal Rumble and he would need a replacement. He called out Kevin Owens to replace him and Owen signed the contract and made the match official.