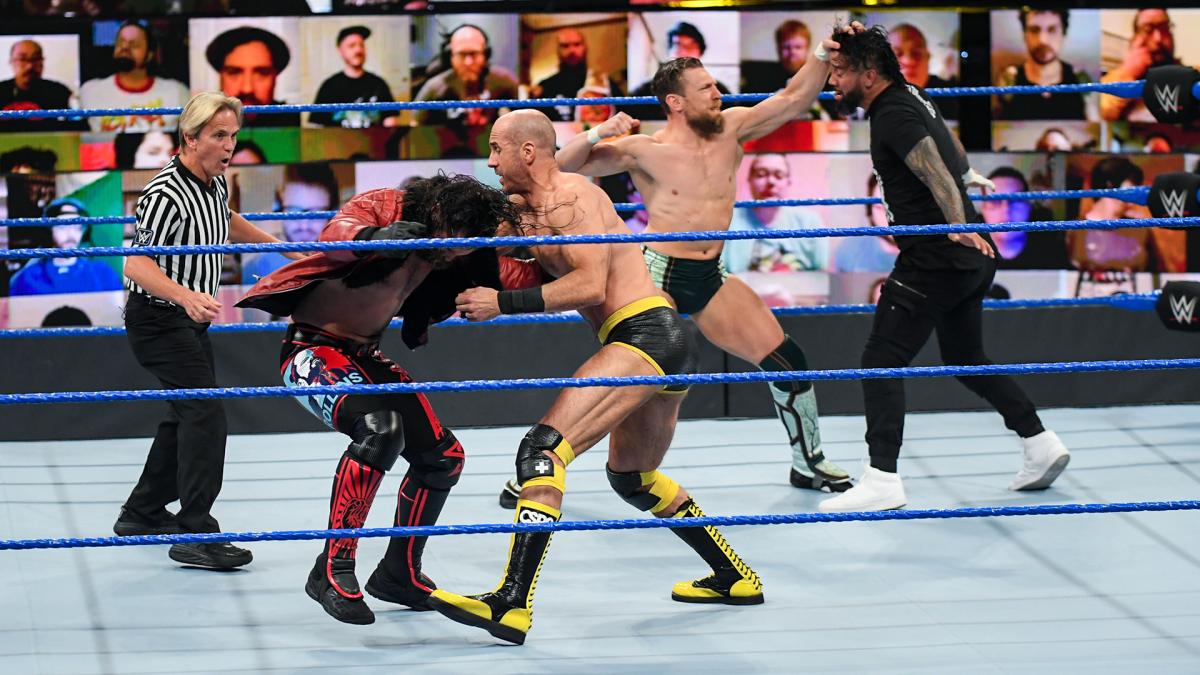 SmackDown kicked off with the promo video of how Roman Reigns revealed that nobody wants to have a one-on-one match with him owing to the fact that he was above their levels. The promo video also entailed how Roman Reigns disrespected Cesaro last week on SmackDown and how Seth Rollins launched a visious attack on Cesaro during his match against Jey Uso at the main event of SmackDown.

Tonight’s SmackDown kicked off with Cesaro in the ring and Seth Rollins music hits then he stood at the entrance and addressed Cesaro. Rollins boasted that he uplifted Cesaro’s career to a higher level by giving him the opportunity to have a single match against him at WrestleMania. Rollins then said that his impact on Cesaro’s career has given him the privilege to challenge Roman Reigns for the Universal Championship last week on SmackDown. Seth Rollins then vowed to continue his fied with Cesaro and promised to defeat him whenever they have a match inside the ring.

Cesaro replied him by challenging him into a one-on-one match tonight on SmackDown and Rollins accepted the challenge then head towards the ring. Jey Uso music hits the air and he distracted the whole situation.

Jey Uso said that Cesaro doesn’t deserve to be in the ring with Roman Reigns because he doesn’t measure up to his level. Uso made it clear in his statement that he would continue to disrespect Cesaro like his family did last week on SmackDown. Uso vowed to whip Cesaro ass in the ring tonight. Seth Rollins then conspired with Uso to launch an attack on Cesaro.

Daniel Bryan music hits and he joined Cesaro in the ring. Bryan revealed that he has come out to make Cesaro’s dream of becoming the Universal Champion a reality. Bryan then said that he had infinite respect for Cesaro because he had worked harder than every other superstar in the locker room including Roman Reigns, Jey Uso, Seth Rollins and himself (Daniel Bryan).

Roman Reigns music hits and he stood at the entrance and addressed both Cesaro and Daniel Bryan. He called Cesaro a bad luck looser and Bryan a stupid WrestleMania main event looser. Roman Reigns then told Cesaro that he is surrounded with people who will wreck and destroy him tonight then Reigns left the arena and the show goes on a commercial break.

Cesaro fired up and hits Rollins with a backbreaker and Bryan made a tag. Bryan hits Rollins with a dropkick then shoved Uso out of the ring apron with a knee drop.The brawl continues as Rollins recovered and hits Bryan with a bucklebomb then Uso toprope and delivered a splash on Bryan and covered him for 2 counts. Rollins and Uso hit Bryan with double vertical suplex outside the ring and the show goes on a commercial break.

Back from the commercial break, Seth Rollins was seen dishing out painful punishment to Bryan and he covered him for 2 counts in the ring. Uso made a tag and hits Bryan with a superkick then the punishment on Bryan continues. Bryan fired up to fight back but he was being overpowered by Uso with a samoan drop and covered for 2 counts.

Rollins hits the ring and continued to decimate Bryan. The leader of the Yes Movement finally recovered and taged Cesaro into the ring. Cesaro delivered a flying uppercut to Uso and covered him for 2 and half counts before Rollins broke the count. The struggle for the victory continues as Uso hits Cesaro with a sperkick then the show goes on a commercial break.

Back from the commercial break, Cesaro was seen delivering multiple uppercuts to Rollins. Rollins tried to fight back but Cesaro overpowered him and held him with his summission move. Uso broke the summission. Rollins then intentionally walked out of the thunderdome and stated that he doesn’t need the pains he was going through.

Cesaro dragged Uso to the top rope and connected him with a superplex then Bryan hit him with the running knee and successfully pinned him for the 3 counts.

After the match ended, Daniel Bryan tempted Roman Reigns to come out and save his cousin ‘Jey Uso’ as Cesaro swings him countless times inside the ring. Roman Reigns refused to show up and Bryan made it clear that most of Roman Reigns’s victory are with an assist from Jey Uso. Bryan then vowed that Cesaro wil be crowned the new Universal Champion if he battles Roman Reigns in the ring.

Apollo Crews alongside with Commander Azeez met with Adam Peacrce and Sonya Denville backstage. Apollo said his Intercontinental Tittle defense scheduled for tonight is nonsense because he cleanly beat Big E at WrestleMania and that Big E doesn’t deserve a tittle rematch from him. Adam Pearce then replied by revealing his opponent tonight and it was Kelvin Owens.

The match starts and Natalya, Shayna Baszler and Reginald watched them from the ringside.

The match kicked off and Nia Jax lifted Tamina and speared her multiple times to the ring corner. She continued to assault Tamina untill Tamina ignited and started fighting back. Tamina drived Jax through the barricades and their brawl continues inside the ring.

Reginald and Shanya Baszler caused a distraction and Tamina made judicious use of the opportunity to hit Nia Jax with a superkick then rolled and skillfully covered her for the 1-2-3 counts to pick the win.

Kayla Braxton interviewed Kelvin Owens backstage and asked him how he felt about his Intercontinental Title match against Apollo tonight. Kelvin said he feels good and that it has been years that he held the Intercontinental Championship. Kelvin Owens continued his speech until he was being interupted by Big E.

Big E wants a rematch against Apollo Crews but Kelvin Owens was able to convince him to allow him face Apollo tonight. Both men laughed and cheered to end the interview.

Daniel Bryan met with Adam Pearce backstage and asked him if he was going to make the title match between Roman Reigns and Cesaro official. Adam Pearce reveal that he cannot just snap his finger and make it happen but he promise to give it a try then Bryan told him to do more than a try.

The match kicked off and Commander Azeez watched them from the ringside. Kelvin Owens dominated the match and held Apollo with a headlock in a bit to make him tapout. Apollo broke the headlock and Kelvin Owens hits him with a dropkick then the punishment on Apollo continues.

Kelvin Owens drived Apollo out of the ring and tried to hit him with a suicide dive but Commander Azeez covered Apollo. Apollo took advantage of the distraction and hit Owens with a suplex and continued to wreck him. Kelvin Owens fired up then hit Apollo with a superkick outside the ring then dragged him into the ring for a splash from the top rope. Sami Zayn music hits and he joined the annouce team then the show goes on a commercial break.

Owens dragged Apollo into the ring to deliver his finisher but Commander Azeez distracted him and Apollo pinned Owens for the 3 counts to win the match.

The match kicked off with Otis and Dominik inside the ring then Otis overpowered Dominik with a shoulder attack and massive clothesline. Otis shoved Dominik out of the ring and the he was decimated alongside with his dad outside the ring as the show goes on a commercial break.

Back from the commercial break, the match continues and Gable was seen dishing out painful punishment on Dominik. He hits Dominik with a suplex and covered him for 2 counts then Otis made a tag. Dominik fired up and finally tag Rey into the ring.

Rey Mysterio unleashed his fury on both Gable and Otis then tagged Dominik into the ring. Dominik powerbombed Gable through the barricades. The match continued untill Rey hits Gable with a 619 and connected him with a splash from the top rope to win the match.

Daniel Bryan and Cesaro made their ways to the ring then Cesaro took the microphone and called out Roman Reigns to give them an answer to his Universal Title match challenge.

Roman Reigns music hits and he walked into the ring as he was accompanied by his special counsel ‘Paul Heyman’ and cousin ‘Jey Uso’. The Big Dog was so furious and said it to Cesaro’s face that he doesn’t deserve to be in the ring with him as the Tribal Chief and Head of the Table.

Roman Reigns addressed Daniel Bryan and said he doesn’t like him and will never like him for any reason. The Head of the Table then offered Daniel Bryan the Universal Title opportunity match on the next SmackDown and Bryan accepted the challenge.

Roman Reigns warned Bryan to stay off his show and never get into his business again if he looses the match next week on SmackDown.