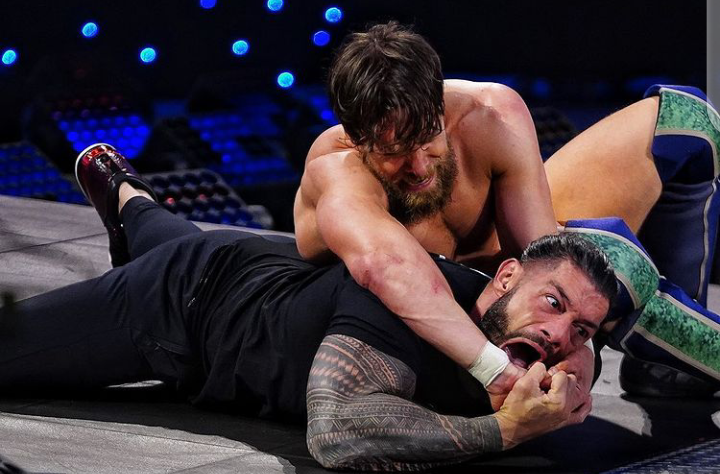 The second to the last SmackDown on the road to WrestleMania started at exactly 8/7C inside the WWE thunderdome at Tropicana field. Tonight’s SmackDown will feature some fascinating events and other incredible matches so as to make the show a successful one.

Friday Night SmackDown kicked off with the summary of the events that made Daniel Bryan to be included into the Universal Championship match at WrestleMania.

The Rated R- Superstar ‘Edge’ kicked off the show as he made his entrance into the ring. He complained about Daniel Bryan getting into his business and inserting himself into the Universal title match at WrestleMania. Edge made it clear to everyone in his statement that he is the WWE Hall of Famer legend, most Rated R-Superstar and Ultimate Opportunist that Roman Reigns and Daniel Bryan are aspiring to become in the future.

After Edge’s speech, Jey Uso and Daniel Bryan were seen preparing ahead of their street fight match scheduled to take place in the Main Event of SmackDown later tonight, then the show goes on a commercial break.

Back from the commercial break, Edge was interviewed backstage and he said that he doesn’t feel bad if Bryan would get wrecked tonight in his street fight against Jey Uso. He further added that he would be glad if Bryan will not be able to make it to WrestleMania.

The match started with Dominic and Ziggler in the ring and Dominik hits him with a DDT then the whole men clashed in the ring leaving The Street Profits and the Mysterios standing tall in the ring as the show goes on a commercial break.

Back from the commercial break, the match continues and Dawkins was seen decimating Ziggler and shoving out both Otis and Gabble. Otis overpowered Dawkins and started dishing out punishment on him. Otis tagged Roode and they continued to make a lesson out of Dawkins with series of painful punishment.

Dawkins fired up and tagged Montex into the ring then Otis tagged Gable. Montex unleashed the fury in him unto the team of Roode and Gabble. The struggle for the victory continues until Gabble connected Montex with a German suplex and Otis delivered a massive 747 splash on him from the turnbuckle to pick the win.

The match kicked off and Nia Jax was at the commentary section to watch the match alongside with Reginald.

Shayna Baszler quickly delivered her finisher but Natalya manoeuvered and skillfully pinned her to get the 1-2-3 counts.

After the match, Nia Jax and Baszler battled Natalya and Tamina in the ring. Ruby Riot and Liv Morgan hit the ring and connected Nia Jax with a DDT. Lana and Naomi rushed into the ring and joined the Brawl untill Nia Jax and Bazler were forced to run for their lives.

Sami Zayn hits the ring and talked about his well anticipated conspiracy video documentary on SmackDown. He then welcomed the Social media influencer ‘Logan Paul’ as his special guest on the show. Sami Zayn told Logan Paul to let his followers know that the conspiracy against his career with WWE. He then requested that Logan Paul should be his special guest at WrestleMania and Logan accepted.

Sami Zayn then authorised the media team to play his conspiracy documenary trailer. After the video clip went off the air, the WWE universe were not too impressed and they booed Sami Zayn. Sami Zayn then asked Logan Paul about his opinion on the conspiracy documentary video. Logan replied by trying to quote Kevin Owens when they had a discussion backstage but Zayn interupted him and said that he has brought Paul to the show and Paul should be on his side and not Kelvin Owens’s side. Sami Zayn continued his speech untill Kelvin Owens came from behind and hit him witn the stunner to ruin his show.

Carmella launched a vicious attack on Bianca on her way into the ring before their match started. She dragged Bianca to the ringside and put her through the steel step as the show goes on a commercial break.

The match continues after the commercial break and Bianca was trying her best to fight back but she was being overpowered by Carmella. Carmella continued to dominate the match and used Bianca hair as a weapon to punish her. Bianca fired up and hits Carmella with a massive clothesline then connected her with a punch to the face. The match continues untill Bianca delivered her finishing move on Carmella to secure the victory.

Shortly after the match ended, Sasha Banks came from behind to hit Bianca with a backstabber but the EST of WWE resisted then the Legit Boss stylishly walked of the ring.

The match started and Uso was in charge. He shoved Bryan out of the ring and heads to ringside for him. Bryan tried to fight back at the ringside but Uso overpowered him and put him through the barricade multiple times before dragging him back into the ring. Uso took the steel chair and hits the ring then started decimating Bryan with it.

Jey Usos inserted the steel chair into Bryan’s leg and toprope for a splash but Bryan dodged it and Uso was left groaning in pains inside the ring. Bryan then grabbed the steel chair and started punishing Uso with it. Roman Reigns music plays and he appeared at the entrance with Paul Heyman and sat on a steel chair to watch the match, then the show goes on a commercial break.

Daniel Bryan dragged Uso into the ring and delivered a drop kick on him from the top rope. He took the steel chain and punished Uso with it. Bryan continued his dominance on Uso until he held him with the Yes Lock to secure the victory.

After the match, Bryan attacked Edge with a running knee at the commentary section and went for Roman Reigns thereafter to hold him with the Yes Lock at the entrance until the referees and Adam Pearce came to rescue Roman Reigns.