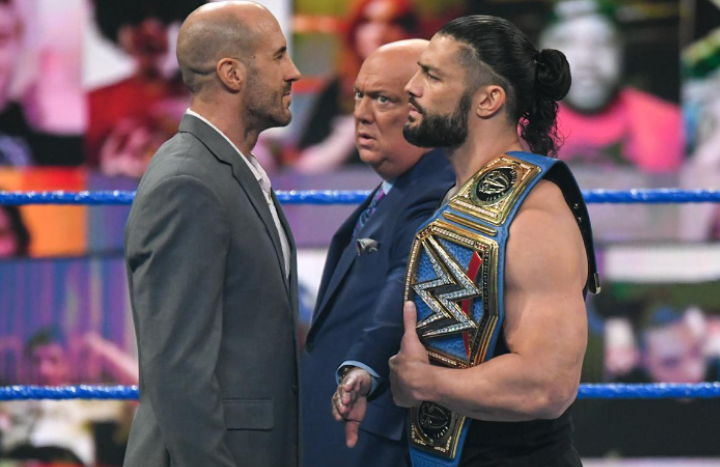 Tonight SmackDown kicked off at exactly 8/7C inside the WWE thunderdome. Tonight is the first SmackDown after WrestleMania and it will feature a Championship match, a commentary debut and other fascinating events.

SmackDown kicked off with the promo video of the Triple Threat Match between Roman Reigns, Daniel Bryan and Edge at the main event of WrestleMania and how it ended as Roman Reigns stood tall as the winner and retained the Universal Championship.

The Universal Champion ‘Roman Reigns’ kicked off the show and he walked directly into the ring. The Head of the Table was accompanied into the ring by his cousin ‘Jey Uso’ and his special counsel ‘Paul Heyman’.

Roman Reigns said that it is no longer a secret that he has brought SmackDown into the eyes of everyone. He then asked Paul Heyman to reveal who he decimated at WrestleMania.

Paul Heyman said that Reigns survived the odds against him at the main event of WrestleMania and wrecked an 11times WWE Champion and a Hall of Famer ‘Edge’ as well as a 5 times WWE Champion ‘Daniel Bryan’ married to a Hall famer to retain his Championship.

Roman Reigns made it clear in his statement that no one is ready to face him in a one-on-one match because they do not measure up to him. He also boasted about fulfilling his obligations at WrestleMania by walking out as the Universal Champion. The Tribal Chief concluded his speech by saying that he won at WrestleMania, opened SmackDown and now he is leaving as a Champion.

Cesaro music hits the air and he went directly into the ring with a microphone and stood right in the front of Roman Reigns. Roman Reigns walked out of the his presence alongside with Jey Uso and Paul Heyman and they never bothered to listen to what Cesaro had to say.

Cesaro walked up to Adam Pearce and Sonya Denville backstage and complained about the disrespective behavior of Roman Reigns towards him. Cesaro called Reigns “Son of a bitch” and demanded a match against him in the ring later tonight.

The match begins and Otis was in charge at the early moments.

Mysterio fired up and started fighting back but he was overpowered by Otis again. Otis toprope to hit Rey with a splash but Rey noticed it and dodged it then Otis ended up broken in the ring. Rey hits Otis with a 619 and skillfully pinned him for the 3 counts to pick the win.

Kayla Braxton asked Paul Heyman if Roman Reigns would accept Cesaro’s challenge tonight then Paul Heyman said Yes. Paul Heyman talked about how Roman Reigns decimated Edge and Daniel Bryan at the main event of WrestleMania and walked out as the Universal Champion.

Paul Heyman added that Seth Rollins ridiculed himself at WrestleMania by allowing Cesaro to triumph over him. Paul Heyman concluded his statement by saying that it is his business to put smiles on the faces of everyone here and that Cesaro will only have a match against the Jey Uso tonight on SmackDown.

Sami Zayn said WrestleMania was suppose to be his vindication but things went the other way round. Zayn revealed that his special guest at WrestleMania ‘Logan Paul’ was supposed to help him expose the conspiracy against him in his documentary video but No things went against him. Sami Zayn accused Kelvin Owens, Micheal Cole and the WWE Universe of turning Logan Paul against him and denying him of his vindication at WrestleMania. Zayn then called out Kelvin Owens and demanded a rematch stating that he would stand tall as the winner tonight since there is no distraction anymore.

The match starts after the commercial break was over and Kevin Owens took control of it. Zayn fired up and hits Ownens with blow to the back of the head. Kelvin Owens recovered and connected Zayn with a destructive clothesline then lifted him up and unloaded him on the ring rope. Kelvin Owens dragged Zayn to the turnbuckle to decimate him but Zayn recovered and delivered the sunset powerbomb on Owens and the show goes on a commercial break.

Back from the commercial break, the match continues and Kevin Owens hits Zayn with a kick to the jaw then covered him for 2 counts. Kelvin Owens toprope and connected Zayn with a splash then pinned him for 2 and half counts. Sami Zayn rolled out of the ring and intentionally stood there untill the referee completed the 10 count out.

After the match has ended, Kelvin Owens went after Zayn and dragged him into the ring then connected him with the stunner before he walked out of the venue.

Apollo Crews talks about his victory at WrestleMania

Apollo Crews was at backstage with Commander Azees and they looked more dangerous that ever. Apollo talked about how he destroyed Big E at WrestleMania and he vowed to do thesame to anyone that dares him. Apollo added that he would have given Big E a rematch tonight but Big E is no where to be found. He concluded his statement by saying that he would wreck and destroy anyone that crosses his path or come for his tittle.

Kayla Braxton interviewed Bayley backstage. Bayley accused Bianca of being arrogant and crying at WrestleMania. She said Bianca cried even before the match began at WrestleMania and that this is not the kind of Champion the Women’s division needed.

Bayley bragged about being the longest reigning Women’s Champion and ended her statement by saying that she wants to attach dignity to the SmackDown Women’s Title by challenging Bianca to a Title match and taking the Championship from her.

Ziggler and Dawkins kicked off the match and Ziggler hits him with a dropkick. Montex made a tag and hit Ziggler directly with a dropkick then covered him for 2 counts. Montex tagged Dawkins into the match and the punishment on Ziggler continues. The four men clashed in the ring and the Street Profits connected Roode and Ziggler with a face force before shoving Ziggler out of the ring then the show went on a commercial break.

Back from the commercial break, the match continues and the Street Profits were in total control. Dawkins displayed dominance and decimated Roode in the ring but Ziggler caused a distraction that made Roode got him with a spinebuster. Dawkins recovered and hit Ziggler with a faceforce then Montex made a tag. Montex built up momentum in the ring by constantly taking out both Ziggler and Roode. The match continued untill Ziggler connected Montex with the Zig Zag from behind and successfully pinned him for the 1-2-3 counts to retain the Tag Team Titles.

The match kicked off and Tamina and Nia Jax were at the ringside watching the match.

Baszler hits Natalya with a kick and covered her for 2 counts. Shanya Baszler attempted the Kirifuda lock on Natalya but Natalya repelled it and skillfully pinned her for the 3 counts to stand tall as the winner of the match.

Jey Uso vs. Cesaro at the main event of SmackDown

Cesaro lifted Uso and smashed him on the floor as the match kicks off. Uso tried to capitalize attack on the arm of Cesaro but he was resisted. Uso hits Cesaro with a kick to the Head outside the ring and the show goes on a commercial break.

Back from the commercial break, the match continues and Jey Uso connected Cesaro with a samoan drop then continued to capitalize painful attack on his injured arm. Uso tried to connect Cesaro with a superplex but Cesaro repelled it and delivered the superplex on Uso.

Cesaro hits Uso with a crossbody from the toprope and covered him for 2 counts. Usos connected Cesaro with a superkick then pined him for 2 counts. Cesaro smashed Uso on the floor and swing him 6 times then Seth Rollins came from behind and launced a visious attack on Cesaro to ruin the match.

The match ended in a no contest

Seth Rollins vowed to continue his rivalry with Cesaro and threatened that he would not end the fued, then SmackDown went to an end.