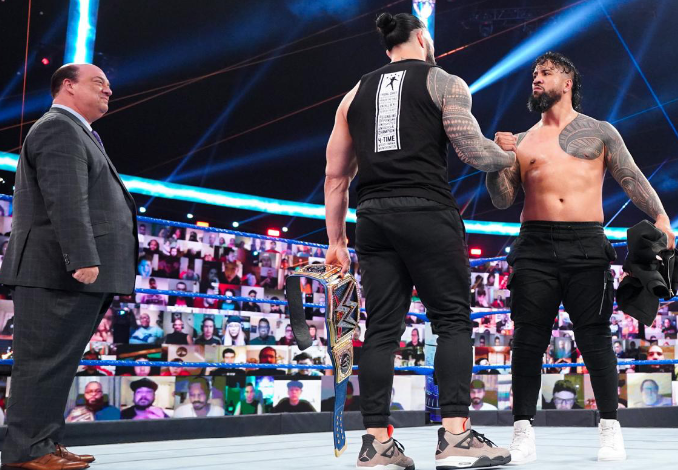 Tonight is the last match SmackDown en route to WrestleMania and it will kick off at exactly 8/7 c on Fox inside the WWE thunderdome at Tropicana field.

The Leader of the Yes Movement ‘Daniel Bryan’ kicked off the show as he makes his way into the ring. He talked about the closeness of their match at WrestleMania and being excited about heading to WrestleMania. Bryan said I would be glad to hear the cheers of live audience again unlike the WWE thunderdome. Bryan said he can’t wait to walk into the ring in the front of 25,000 people chanting Yes.

Daniel Bryan made it known to everyone that he is the only man in WWE to make Roman Reigns tap-out in a single match. Bryan vowed to unleash the fury in him on Sunday at WrestleMania and walk out as the new Universal Champion. He ended his speech by asking the WWE Universe if he would win at Wrestlemania and they all chanted Yes.

Backstage interview with the Street Profits

The Street Profits were asked how excited they were to have a Championship match tonight and they vowed to win the SmackDown Tag Team Tittles tonight the way Daniel Bryan will become victorious at Wrestlemania on Sunday. They continued their speech until Robert Roode and Dough Ziggler came from behind and attack them to ruin their interview.

The match begins with Dominik and Gable were building up momentum in the ring. Robert Roode hits the ring and started decimating Dominik. Gable tag himself in and delivered a kick to Dominik then covered him for 2 counts. Dominick recovered and connected Gable with a dropkick. Rey Mysterio made a tag and hits Gable with a DDT then shoved him out of the ring. Dominick delivered a massive high dive on both Otis and Gable outside the ring as the show goes on a commercial break.

Back from the commercial break, the match continues with Montex and Rhoode in the ring. Montex hits Roode with a dropkick and covered him for 2 counts. He then continued to punch Ziggler and Roode until Roode got him with a spinebuster. Otis made a tag and started dishing out punishment to Montex. Gable made a tag, Ziggler came into the ring thereafter and the punishment on Montex continues.

Montex surprisingly fired up and hits Ziggler with a massive powerbomb then tagged Dawkins into the ring. Rey and Dominik Mysterio hit Rhoode and Ziggler with a double 619. The whole 8 men clashed in the ring. Montex hits Gable with a forward splash from the top rope then Ziggler gave Montex a superkick to prevent him from covering Roode. Roode finally pinned Gable for the 3 counts to pick the win and retain their tittles.

Robert Roode and Dough Ziggler def. Gable and Otis, The Street Profits and Rey & Dominik Mysterio to retain their Championship.

The promo of the rivalry between Randy Orton and Bray Wyatt & Alexa Bliss was played. The video ranged from when Orton set the Fiend on fire to when Alexa Bliss started tormenting Orton to when Bray Wyatt finally returned at Fastlane and Challenged Orton to a match at WrestleMania. The match between these two stars will take place on the second night (Sunday, April 11) of WrestleMania.

Nia Jax music hits and she makes her way into the ring accompanied by Reginald and her Tag Team partner ‘Shanya Baszler’. Tamina came to join her in the ring and she was also accompanied by her friend ‘Natalya’.

The match begins and Nia Jax took control of the match when Reginald distracted Tamina. Nai Jax continued the dominance by inflicting punishment on Tamina. Nia Jax ran into the steel post with a shoulder attack. Tamina hits her with a Samoan drop and wanted to cover her up for the 3 counts but Baszler intervened and ruined the match

The match was cancelled and ended in no contest.

The winner of the 2021 Royal Rumble ‘Edge’ hits the ring with a steel chair in an aggressive attitude to address the WWE Universe ahead of his match at WrestleMania.

Edge talked about how he fought for 9 years in his career. He said he came back to WWE to steal the show and main event WrestleMania. He accused Daniel Bryan of stealing his spotlight and forcing himself into the Universal tittle match at WrestleMania thereby making it a Triple Threat Match. Edge said Bryan could end up pinning Roman Reigns to secure the victory and there is nothing he can do about it.

Edge reminded everyone about how he was forced to retire 10 years ago due to injury and how he returned and won the Royal Rumble to punch his ticket into the main event of WrestleMania. He concluded his statement by demanding maximum respect from everyone claiming that he has achieved what no other person has ever achieved in the history of sport entertainment.

Jojo interviewed the SmackDown Women’s Champion ‘Sasha Banks’ backstage and asked her how she felt about her tittle defense against Bianca Belair at WrestleMania. Sasha banks replied by saying that she doesn’t care about whatever Bianca has said on the show. Banks said Bianca may be the EST of WWE but she is not the best. Sasha Banks revealed that she knows that Bianca will bring up all of her best at WrestleMania but the Legit Boss will walk out of WrestleMania as a Champion when she taps out Bianca in the ring.

Roman Reigns music hits the air and he walked into the ring accompanied by his special counsel ‘Paul Heyman’ as the show goes on a commercial break.

Roman Reigns siad he is not a politician and that he has got so many things to worry about. He said he is into a match that he could loose even though he doesn’t get pinned. Reigns vowed to show up at WrestleMania and win. He boasted that he changed the race on SmackDown and made the Universal title relevant.

The Head of the Table said if Bryan makes him tap out on Sunday then he becomes the champion but that would never happen and Bryan will never become a champion. Roman Reigns also added that Edge is always dreaming of taking the Universal title but his dream will become shattered at WrestleMania. Reigns concluded his speech by saying that he would wreck everyone at WrestleMania and pin them to become the winner, then the whole world will acknowledge him.