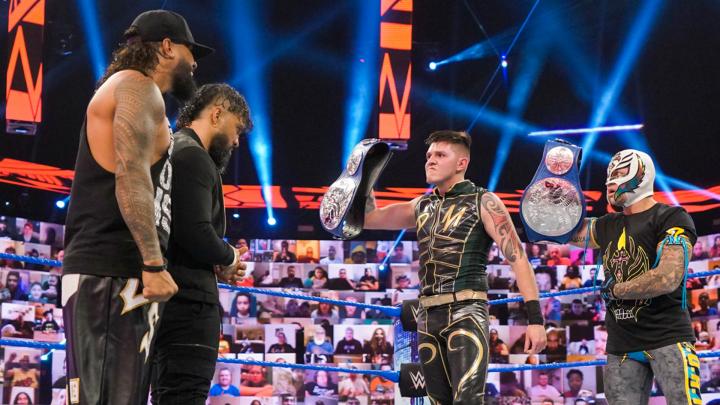 Jey and Jimmy Uso secured the SmackDown Tag Team Title opportunity match when they squared off with The Street Profits last week on SmackDown and defeated them. The Tag Team Title match eventually happened on SmackDown, and Dominik pinned Jimmy for the 3 counts while his shoulders were up.

After the match, The Usos met with Adam Pearce and Sonya Deville backstage to complain about the outcome of the match. Adam and Sonya, however, assured the Usos that they would review the footage of the match and let them know their decision before SmackDown runs to an end.

Check out the initial outcome of the match below:

After intelligent review of the footage of the match, Adam Pearce called on Rey and Dominik Mysterio backstage and informed them that they would defend their Titles against The Usos again tonight on SmackDown.

The rematch was the last match on SmackDown and it was a bizarre and chaotic match. The Usos decimated Dominik for what he did earlier on the show by fraudulently pinning Jimmy to retain the Tag Team Titles.

The match continued until Roman Reigns took matters into his hands by attacking The Mysterios to get the match cancelled and the Mysterio retained their Titles.

Do miss out any episode of next week SmackDown on Fox at exactly 8/7 C.