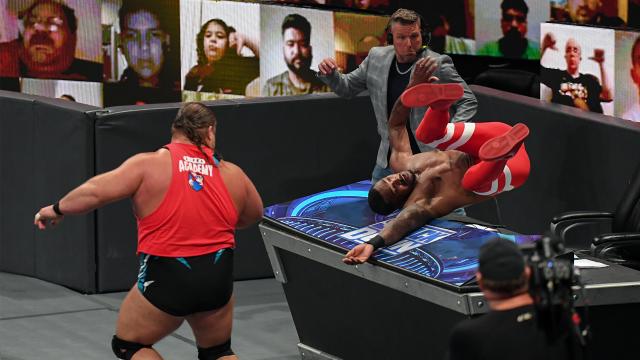 This week episode of Friday night SmackDown started with chaos and ended in pandemonium as Otis viciosly attacked Montex during the early hour of the show and cost him a career ending injury.

Last night SmackDown saw Montex Ford versus Gable inside the ring and the match was a very intense one. Montex decimated Gable and he was at the point of winning the match when Otis suddenly appeared from behind and furiously attacked him.

Otis got his hands on Montex and shoved him out of the ring. He went for Montex at the ring side and smashed on the annouce table. Otis further grabbed Montex and connected him with a shoulder force through the steel step before driving him into the ring again. Otis connected him with 2 massive splash from the second rope before Dawkins and other WWE officials came to rescue him.

After the SmackDown went to an end, WWE announced that Montex has sustained a rip fracture and torn intercostal certilage from Otis attack, and the company futher added that Montex is still being accessed at a local medical centre and that any other injury updates will be disseminated to the WWE Universe.

What do you think about Otis attack on Montex Ford on SmackDown? Share your opinion with us at the comment section.