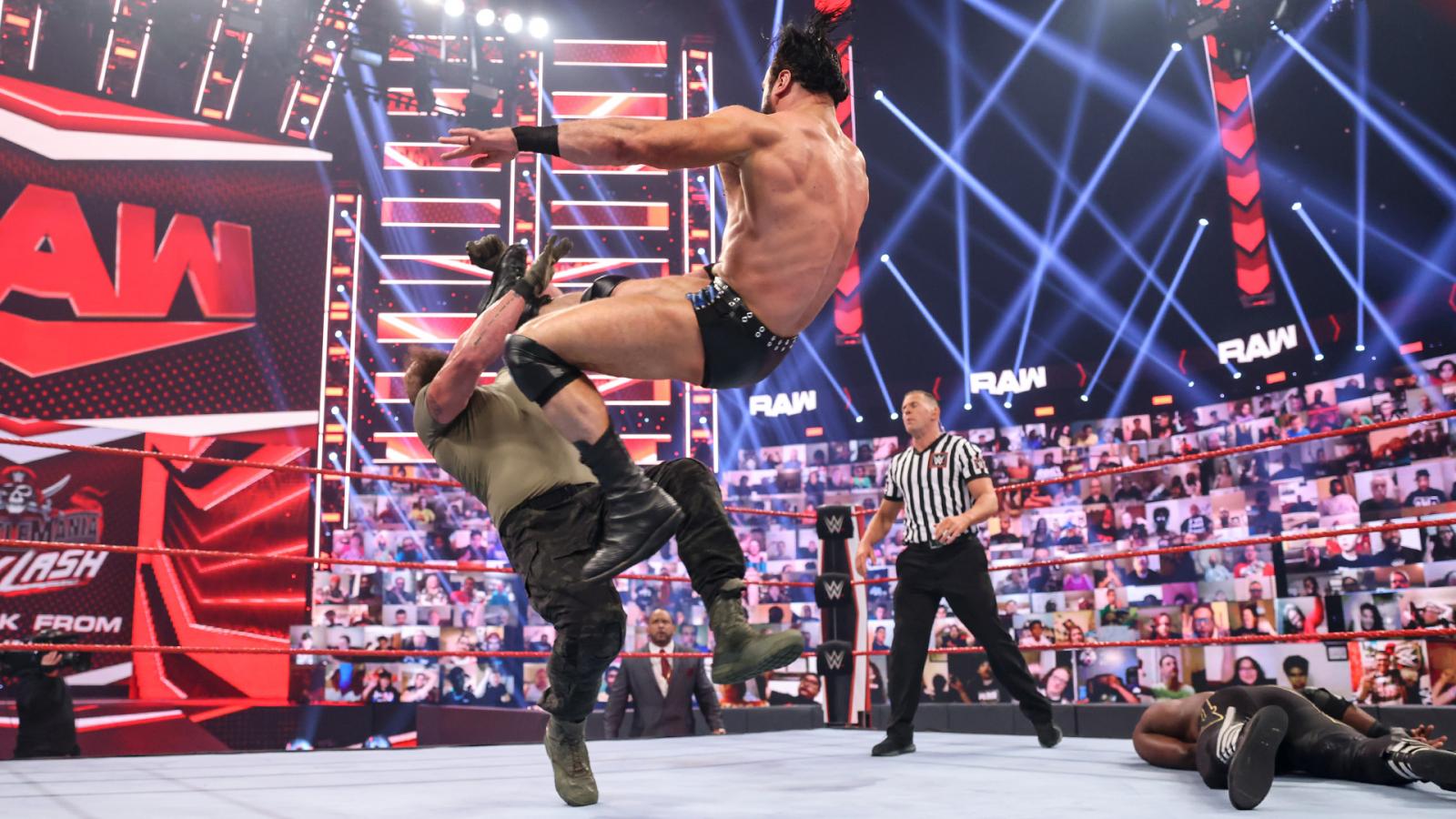 The Raw Tag Team champions ‘Omos & AJ Styles’ kicked off the show and made their way into the ring like Kings. AJ Styles grabbed the mic and talked about how Omos made his in-ring debut at WrestleMania and how they both won the Raw Tag Team Championship. AJ Styles asked the WWE Universe if they missed them on the show. AJ and Omos revealed that they have been partying and having lots of fun while they were absent on Raw. AJ Styles also bragged about being a grand slam champion and he continued his speech until was interrupted by The New Day.

The New Day stood at the entrance and chastised Omos and AJ Styles for being absent on Raw after winning the Raw Tag Team Championship at WrestleMania. Kofi Kingston made it clear that his life changed when he won the WWE Championship for the first time at WrestleMania in the front of thousands of WWE fans, millions watching at home, including his children that celebrated it with him in the ring and his brothers present at the arena. Kofi said he appeared on Raw after WrestleMania because that is the kind of Champion that The New day has elevated him to be.

Xavier Woods got the mic and also said that Omos and AJ Styles may boast about winning the raw tag team championship at WrestleMania but their absence doesn’t make them an ideal Champion. Xavier Woods then vowed that the New Day will take back their Titles tonight and become 12-time Tag Team Champions.

Omos replied The New Day by asking them to get their mouth shut and he also threatened to put more damages to the New Day tonight by getting them wrecked in their match.

The match kicked off with Omos and Xavier Woods in the ring. Omos grabbed Woods and slammed him on the floor then Woods quickly tagged Kofi in ring. Kofi hits Omos with 2 kicks to the leg but he got smashed when he attempted the third one. Xavier Woods and Kofi hits Omos with double dropkick then Omos countered and connected them with a destructive clothesline. Xavier Woods shoved AJ Styles out of the ring then Kofi hit him with a high dive from the top rope and the show goes on a commercial break.

Back from the commercial break, the match continues with Woods decimating AJ Styles. The New Day isolated Styles with multiple kicks to the ring corner then Kofi balanced the punishment with a drop kick before he covered him for the 2 counts. Kofi hits Styles with a kick to the jaw and pinned him for 2 counts. AJ Styles finally fired and hit Kofi with a kick to then tag Omos.

Omos hits the ring and connected Kofi and Xavier with a backbreaker. Omos wrecked the New Day and tagged AJ into the ring. AJ Styles then toprope and connected Xavier Woods with the phenomenal forearm to pick them.

The match kicked off with Dana taking control after hitting Charlotte with a drop kick but the Queen quickly fired up and started fighting back. Charlotte hits Dana with a dropkick to the face and covered her for 2 counts.

Dana tried to fight back after hitting Charlotte with a kick but she was being overpowered and the brawl continues. Charlotte ran into the ring corner with kick when she wanted to attack Dana. Dana immediately took advantage of the situation and took out Charlotte then hit her with a forward splash from the top rope. The match continued until Charlotte held Dana with a her submission move to make her tap out.

Charlotte continue to hold Dana with her submission move after the bell has been rung for her victory. Mandy Rose quickly ran into the ring and shoved Charlotte out of the ring with a kick. Sonya Danville music hits and she walked into the ring then the show goes on a commercial break.

Sonya Danville hits the ring and told Charlotte to make a proposal about the Raw Women’s Championship match at WrestleMania Backlash. Charlotte revealed in her statement that she is the first woman to break Asuka winning streak. The Queen also added that she is the original influencer and the most famous face of the Women’s division that others follow.

Charlotte then told Sonya Danville to make the right decision and to be fair to the Flair. Sonya Denville then finalized her decision and announced that Charlotte has been officially added to the Raw Women’s Championship match at WrestleMania Backlash thereby making it a Triple Threat match.

Rhea Ripley music hits and she labeled Sonya Denville’s decision a crap. Ripley said she is confident that she would beat Asuka at WrestleMania backlash because she has done it in the past. She got into the ring and said Sonya has made a awful decision by adding Charlotte to the Raw Women’s Championship match at WrestleMania Backlash.

Asuka hits the ring and vowed to beat both Charlotte and Ripley at WrestleMania backlash to win back her Title. Charlotte then addressed both Asuka and Ripley by saying that they were both out of their minds. Charlotte threatened that she would decimate Asuka & Ripley and walk out of WrestleMania Backlash as a Champion.

The Miz talked about being disrespected on Raw

The Miz got into the ring with Johnny Drip Drip standing by his side. The Miz bitterly rants about being humiliated on Raw last week with tons of ripped tomatoes. The Miz said that a man of his caliber should be highly respected because he has achieved a lot in his career.

The Miz bragged about being a 2-time WWE Champion, United States Champion, Intercontinental Champion and Tag Team Champion. The Miz also added that he is a movie star and reality star that is supposed to be placed on the spotlight on Raw.

The Miz then concluded his speech by saying that Morrison will teach Damian Priest a lesson he will never forget as they clash tonight on Raw.

The match kicked off and The Miz watched from the ringside . Damian Priest took control of the match and drived Morrison out of the ring as the show goes on a commercial break.

Back on the commercial break, Morrison hits Priest with a kick to the head and covered him for 2 counts. Priest ignited and connected Morisson with a faceforce. Priest continued to dominate the match with various athletic move on Morrison.

The Miz caused a lot of distractions to make Priest lose the match but Morrison got affected by his distractions and this gave Priest the opportunity to connect him with the reckoning to pick the win.

Randy Orton and Elias kicked off the match but Elias quickly took control then tagged Jaxson into the ring. Orton recovered and tagged Riddle into the ring.

Elias made a tag and hit Riddle with a knee attack to the face then pinned him for 2 counts. Jackson lifted Riddle and smashed him with a backbreaker on Elias’s leg. The match continue then Riddle connected Jaxson with a knee attack and tagged Orton into the match.

The Viper unleashed his fury on both Elias and Jaxson. He connected Elias with a backbreaker then dragged him to the apron for a faceforce and RKO. Riddle made a tag and delivered the folding bro on Elias from the top rope to secure the victory.

Nia Jax and Naomi kicked off the match but Nia quickly tagged Bazsler after her attempt to smash Naomi failed in the ring.

The four women clashed in the ring leaving Lana and Bazsler in the ring while Naomi and Nia were at the ringside groaning in pains. Reginald caused a distraction and this made Bazsler to capture Lana with her submission move to pick the win.

Bobby Lashley vs. Braun Strowman at the main event of Raw

Bobby Lashley took Strowman down as the match begins and covered him but Strowman kicked out of one count. Strowman became furious and shoved Lashley out of the ring. Strowman dragged Lashley into the ring and inflict painful punishment on him at the ring corner. Lashley fired up and hit Strowman with a clothesline then MycIntyre music hits and he joined the announce team to watch the match. Strowman immediately went out to confront MycIntyre then Lashley attacked him from behind.

The match continued until Braun Strowman hits MycIntyre on the chest at the ringside. Braun then got distracted by MycIntyre when he got into the ring and this made Lashley to hit him with a spear for the win.

MycIntre got into the ring immediately the match ended and wrecked both Lashley and Strowman with claymore kick to end the show.