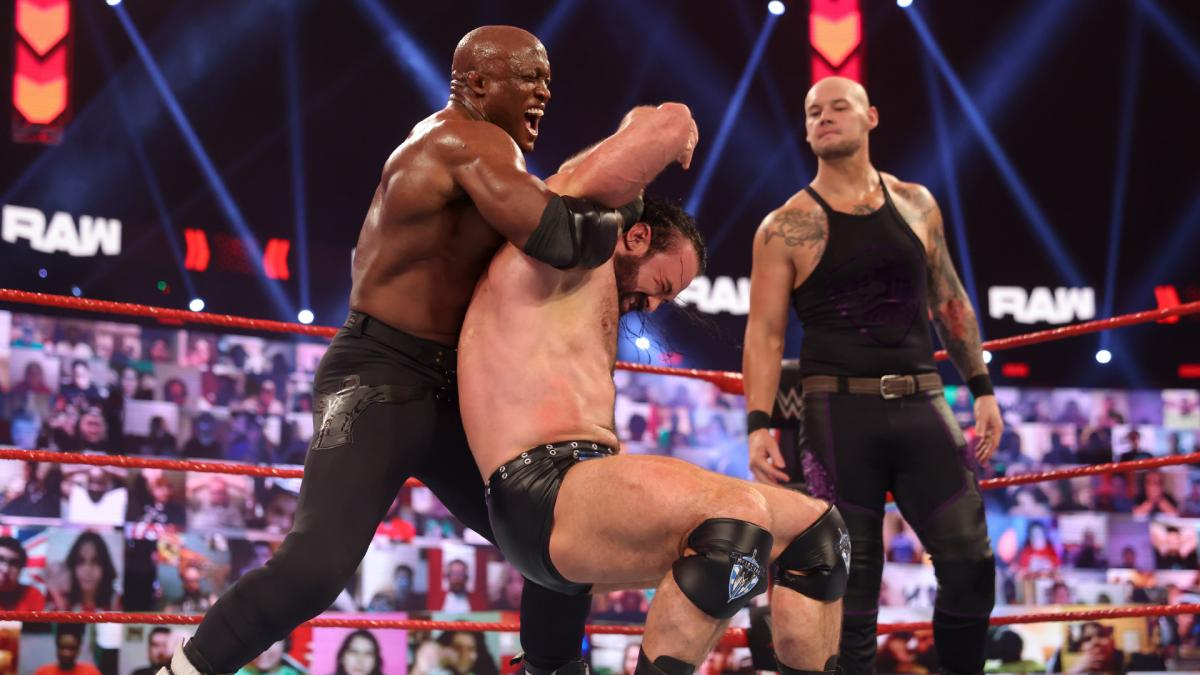 The second to the last Monday Night Raw on the road to WrestleMania kicked off at exactly 8/7C inside the WWE thunderdome at Tropicana field.

The show kicked-off with the Hurt Business in the ring. The WWE Champion Bobby Lashley stood on his point and declared that he would give the WWE Championship opportunity match to anyone that wrecks and destroys McIntyre before Wrestlemania.

Bobby Lashley then said that he cannot associate himself with failures like Shelton Benjamin and Cedric Alexander due to the fact that they lost their titles and that they do no longer measure up to the standard to be members of the Hurt Business anymore. This statement made Benjamin angry and he revealed that the Hurt business was responsible for the success of theAlmighty Lashley capturing the WWE Championship.

Benjamin continued speaking in anger and MVP tried to control the situation but this gave an opportunity for Lashley to hit Alexander with a punch on the face and also shoved Benjamin out of the ring after a faceforce attack.

The match kicked off with so much energy from both men and they were building up huge momentum in the ring. Sheamus hits Riddle with a backstabber and covered him for 2 counts. Riddle charged up and started fighting back, he locked Sheamus with his summission move but Sheamus repelled it and never tapped out. The struggle for the victory continues untill the Celtic warrior hits Riddle with a knee strike to the face and successfully pinned him for the 3 counts.

The match begins as Shane McMahon and Elias Samson watched from the ringside. Braun Strowman grabbed Jaxson as the match starts and viciously decimated him. Shane caused a distraction and this gave Jaxson the assist to attack Strowman from behind and the match continues.

Jaxson toprope to hit Strowman but his plan failed and Strowman attckked him with a clothesline.

After the match ended, Shane and Samson attacked Strowman from behind but Strowman eventually countered and shoved them out of the ring. Braun Strowman then made a shocking revelation that his match against Shane McMahon at WrestleMania will be a steel cage match and that Shane will have nowhere to run to.

The Master Strategist ‘The MIZ’ and John Morisson appeared in the ring and they talked about Bad Bunny getting into their business. The MIZ revealed that he smashed a guitar at the back of Bad Bunny in oder to teach him a lesson but Bad Bunny disrespected him by smashing him wth a guilty last week on Monday Night Raw.

The MIZ then vowed that he would wreck Bad Bunny at WrestleMania and make an example out of him. The MIZ and John Morrison then officially launched thir music video ‘Hey Hey Hop Hop’ to the whole WWE universe and it was indeed a house party inside the WWE thunderdome.

Bad Bunny and Damian Priest made their entranct to the barricades session after the music video went off the air. Bad Bunny then vowed to decimate The MIZ at WrestleMania and make him his bitch. The MIZ got angry and went out of the ring to get Bad Bunny but the international artist hit him with a punch to the face to end the music video launching.

The match begins and Benjamin was in control at the early moments but Lashley fired up thereafter and hit him with a faceforce then shoved him out of the ring. Lashley lifted Benjamin up and hit him on the steel post outside the ring and dragged him back into the ring. Benjamin connected Lashley with his signature move and covered him for 2 counts.

Benjamin then started to attack Lashley with the knee strike into the ring corner until Lashley fired up again and connected him with the Almighty spinebuster 2 times. Lashley then held him with the Hurt Luck to secure the victory.

AJ Styles put a drop kick on Woods as the match begins then Woods charged up and started fighting back. Woods shoved AJ Styles out of the ring and the chaotic brawl continues as the show goes into a commercial break.

Back from the commercial break, Woods was in control of the match and he covered Styles for 2 counts after lifting and hitting him on the ring floor. Woods dragged Styles to the top rope and wanted to launch an attack but Styles maneuvered and hit him with a knee strike then pinned him for 2 counts. The brawl continues until Omos hit Woods around the ring rope and the match was cancelled.

Kofi Kingston tried to attack Omos from the steel step but Omos was able to repel the attack. Omos then lifted him and threw him into the barricades section. AJ Styles and Omos hit the ring thereafter and completely wrecked Woods.

Rhea Ripley hits Asuka on the face with the table after the contract signing and Asuka fell to the ground. The WWE Women’s Tag Team Champions ‘Nia Jax and Shayna Baszler) music hit and they stood at the entrance alongside with Reginald. They boasted about being the irresistible forces in the women’s division and later challenged Rhea Ripley and Asuka to a tag team match next week on Raw. Rhea Rhipley then accepted their challenge and their section went to an end.

Drew McIntyre lifted Richochet and viciously hit him on the ring floor with so much intensity as the match kicks off. Richochet ignited and started decimating the Scottish warrior with fantastic athletic move.

Richochet shoved McIntyre out of the ring and hit him with a dropkick then dragged him into the ring again. Richochet toprope and wanted to connect MycIntre with the 450 splash but MycIntyre maneuvered and hit him with the claymore kick to stand tall as a winner of the match.

Back from the commercial break, Mustafa Ali was seen inflicting painful punishment on McIntyre and capitalising punishment on his leg. He toproped and connected MycIntyre with a forward splash then covered him for the 2 counts.

MycIntyre fired up and hits Mustafa with multiple belly-to-belly suplex and the punishment on him continues. MycIntre then quickly delivered the claymore kick to Mustafa and successfully covered him for the 1-2-3 counts.

Drew McIntyre called out Bobby Lashley after the match then Lashley hits the ring and they both met face-to-face. McIntyre stated that no matter the number of men that Bobby Lashley sends after him it will never stop their match at WrestleMania.

MycIntyre accused Lashley of being a lazy man and this brought out the anger in Lashley which made both men to clash in the ring. MycIntre overpowered Lashley and shoved him out of the ring.

Baron Corbin then came from behind and attacked McIntyre until he was completely out of strength. Bobby Lashley hits the ring again and connected McIntyre with the hurt lock 3 times to end the show.