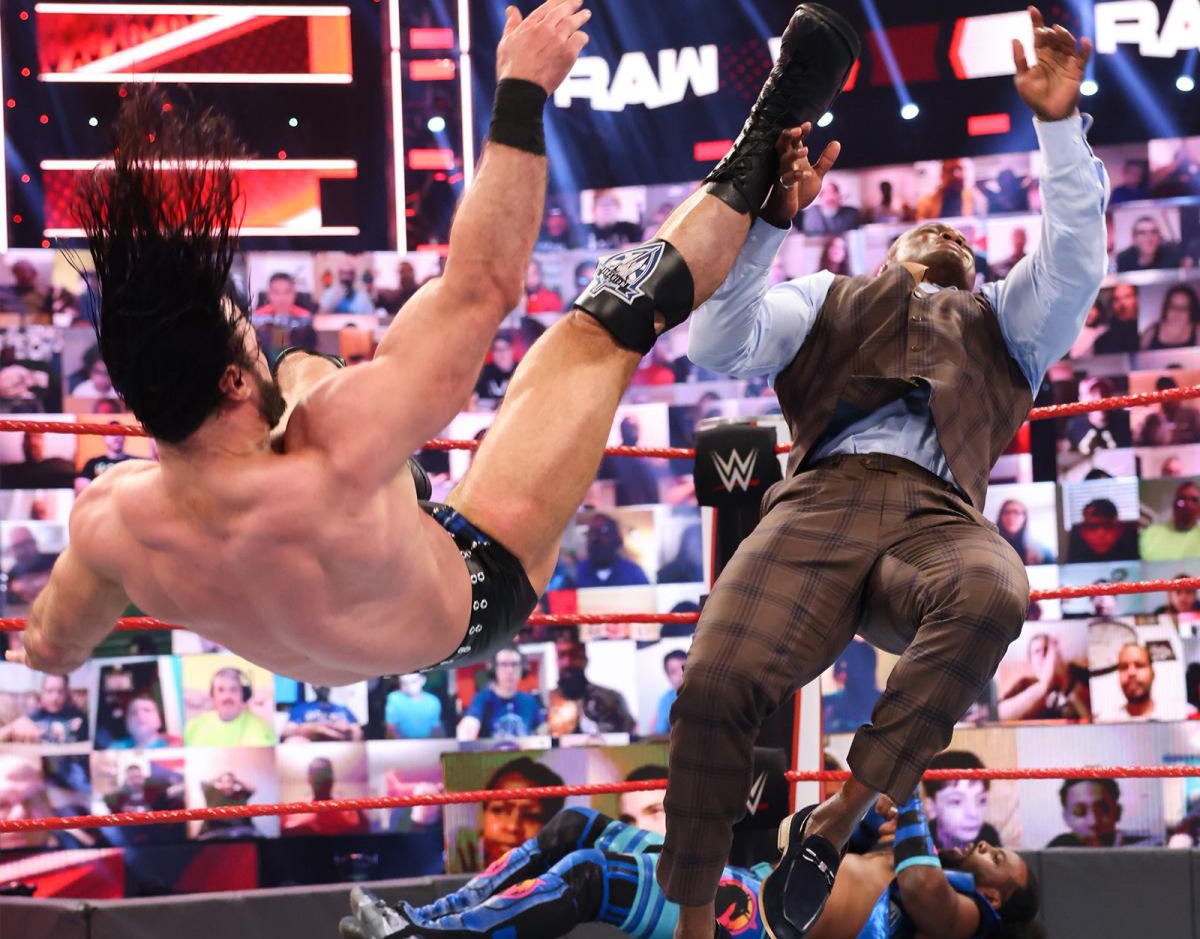 MVP kicked off Monday Night RAW and he welcomed the CEO of the Hurt Business Bobby Lashley into the show. Bobby Lashley music hits and he was accompanied into the ring by 5 gorgeous women.

The recap of last week’s video of where MVP issued an open challenge to the wrestlers in the locker room was shown to the WWE Universe. The video also entailed how MVP revealed that the open challenger had nothing to do with the WWE Championship.

MVP ordered the WWE Universe to give a round of applause to Bobby Lashley for being a dominant Champion. He also added that WWE will be leaving the thunderdome by July and it will be an honour to see Bobby Lashley reign as the WWE Champion in the midst of live fans. MVP revealed that Drew McIntyre is getting himself into Lashley’s business by not forgetting about the past and moving on.

Lashley boasted that he has beaten Drew McIntyre on several occasions. Lashley revealed that he defeated the Scottish Warrior at WrestleMania and decimated him and Braun Strowman at WrestleMania Backlash therefore, MycIntyre doesn’t deserve any Title shot from him anymore.

Drew MycIntyre music hits and he made it clear that the only business he has gotten with Bobby Lashley is the WWE Championship and that he won’t step back untill he recaptures the Title back from him. MycIntyre continued his speech until he was being interupted by The New Day.

The New Day music hits and they made their way into the ring and adressed Drew McIntyre and Bobby Lashley. Kofi Kingston bragged about pinning Lahley last week on Monday Night RAW and he also revealed that he never needed MycIntyre’s help to beat Lashley. He then said that the only reason he came out to accept Lashley’s challenge last week was because he never got the WWE Championship rematch when he lost his Title to Brock Lesnar.

Kofi Kingston said it to MycIntyre’s face that he should step aside and allow him challenge Bobby Lashley for the WWE Championship. Kofi revealed that he did what MycIntyre could not achieve for several months by single handedly pinning and defeating Lashley in a single match. Kofi continued his speech until he was interupted by Adam Pearce.

Adam Pearce stood at the entrance and annouced that Drew MycIntyre and Kofi Kingston will compete tonight in the ring and the winner of the match will earn the Title opportunity match against Bobby Lashley at Hell in the Cell.

(winner faces Bobby Lashley at Hell in the Cell for the WWE Championship).

The match kicked off as Bobby Lashley and MVP watched from the VIP lounge at the entrance. Xavier Woods also stood at the ringside and watched the match from there.

Kofi Kingston took control of the match as it kicks off and he covered MycIntyre for 1 count after hitting him with a splash from the apron. MycIntyre ignited and started fighting back but he was being shoved out of the ring by Kofi.

MycIntyre changed the whole styles of the match when he took control. He grabbed Kofi and smashed him with a faceforce at the apron, then the show goes on a commercial break.

Back from the commercial break, MycIntyre was in total control of the match and he continued to dish out painful punishment to Kofi with Suplex and other visious attacks. MycIntyre took him to the ringside and smashed him on the barricades before dragging him into the ring for another suplex. MycIntre pinned Kofi for 2 counts after delivering the suplex to him.

Kofi recovered and started fighting back but he was overpowered with a suplex from the Scottish Warrior. MycIntyre continued to dominate the match untill Monday Night RAW went to a commercial break again.

Back from the commercial break, MVP and Lashley joined the annouce team, MycIntyre continued to dominate the match. He wrecks Kofi with a suplex from the top rope. The match became more intense and both men continued to build up huge momentum in the ring.

MycIntyre ran into the steel post with a shoulder force when he wanted to attack Kofi at the ring corner. Kofi immediately top-rope and hit him with a splash on the back and covered him for 2 counts. Kofi drived MycIntyre out of the ring and hit him and Lashley with a high dive at the commentary section.

Lashley and MVP got into the ring therefater and attacked MycIntyre and Kofi Kingston to get the match cancelled. Kofi hits Lashley with the Trouble in Paradise and MycIntyre sent him out of the ring with the Claymore before he was being rescued by MVP.

The match got cancelled and ended in a no contest.

The rules of the match states that Rhea Ripley must defeat Nicki within 2 minutes.

Rhea Ripley underrated Nicki and thinks that she would control the match and put her down before 2 minutes. To the surprise of the WWE Universe Nicki Cross beat the time and never got pinned for 3 counts or taped out to Rhea Ripley.

Nicki Cross wins the match after Rhea Ripley failed to defeat her within 2 minutes.

Adam Pearce, however, calmed them down and assured them that they will have their rematch next week on Monday Night RAW with the stipulation that the winner will face Bobby Lashley for the WWE Championship at Hell in the Cell.

The match kicked off as Monday Night RAW returned from the commercial break. Charlotte took control of the match as it begins and she capitalized her attack on the left knee of Asuka. Charlotte dragged her to the ringside and connected her with a knee force to the steel step, then the show goes on a commercial break.

Back from the commercial break, Monday Night RAW continued with Charlotte and Asuka clashing in the ring. Charlotte continued to control the match, Asuka fights back by holding her with the Asuka Submission but Charlotte never taped out. Charlotte fired up and continued to attack Asuka injured knee.

Asuka recovered and hits The Queen with a suplex and hip attack to get her covered her for 2 counts. Asuka drived Charlotte out of the ring and wrecked her with multiple kicks before Monday Night RAW goes on a commercial break again.

Back from the commercial break, Asuka hits Charlotte with a knee attack to the face and covered her for 2 counts. The match eventually came to an end when Charlotte manuevered and skillfully pinned Asuka for the 3 counts to secure the victory.

Adam Pearce called for Bobby Lashley and they met backstage alongside with MVP. Adam Pearce scolded Lashley for ruining the match between MycIntyre and Kofi. Adam then issued a strong warning to Lashley that if he ruins the rematch between Kofi and MycIntyre next week on RAW, then he would be suspended for 90 days without getting paid. Lashley became furious and wanted to square off with Adam Pearce but MVP held him back and controlled the situation.

The match kicks off and both men are performing incredible in-ring actions. Alexander smashed Benjamin on the ring floor from the tope rope and covered him for 2 counts. He continued to dominate the match by delivering multiple dropkicks to Benjamin.

Benjamin eventually fired up and hit Alexander with a destructive clothesline and spinebuster before covering him for a count. The match continued untill Alexander delivered his finishing move on Benjamin to win the match.

The match kicked off and Riddle was in charge . He decimated Woods with multiple suplex. Woods recovered and hits Riddle with a suplex from the top rope and another one from the apron. Woods lifted Riddle again and connected him with another suplex and covered him for 2 counts. Riddle shoved Woods out of the ring but he ended up getting a destructive AA from Woods at the apron before Monday Night RAW goes on a commercial break.

Back from the commercial break, the match continued and Riddle was in charge. Riddle eventually won the match when he knocked out Woods with a RKO and successfully pinned him for the 3 counts.

Monday Night RAW continued inside the WWE thunderdome and AJ Styles hits Jaxson with a dropkick when their match kicked off. Jaxson drived AJ Styles out of the ring and Elias connected him with a kick to the face. Jaxson immediately dragged him into the ring and hit him with his finishing move to stand tall as the winner of the match.

Omos ran to the ringside and unloaded his fury on Elias after the match. He chased Elias to the entrance and smashed him on the LED Board before heading back to the ring to check on AJ Styles.

Carillo displayed a magnificent performance by taking control of the match when it kicked off. The match was really a short one and Sheamus won the match after rolling up Carrillo and pinning him for the 3 counts.

After the match ended, Sheamus started to attack Carrillo but Richochet suddenly appeared in the ring and hits Sheamus with a dropkick to rescue Carrillo. Sheamus suffered series of thunderous splash from Carrillo and Richochet before he finally escaped and rolled out of the ring.

Tamina and Shayna kicked off the match and Shayna took her down. Nia Jax made a tag and she continued to dish out punishment to Natalya. Shayna got into the ring therefater but she was overpowered by Natalya. Reginald walked to the ringside to watch the match then Monday Night RAW goes on a commercial break.

Back from the commercial break, Shayna was seen decimating Natalya and dominating the match. Natalya hits Shayna with a body slam and tagged Nia Jax into the ring. The match continued with Taimina and Nia Jax and they fought out of the ring. Shayna and Natalya continued to wrestler in the ring, then Reginald made a distraction that caused Shayna her victory.

Shayna furiously ordered Reginald to leave the ringside and Natalya took advantage of the situation and pinned Shayna from behind to win the match.