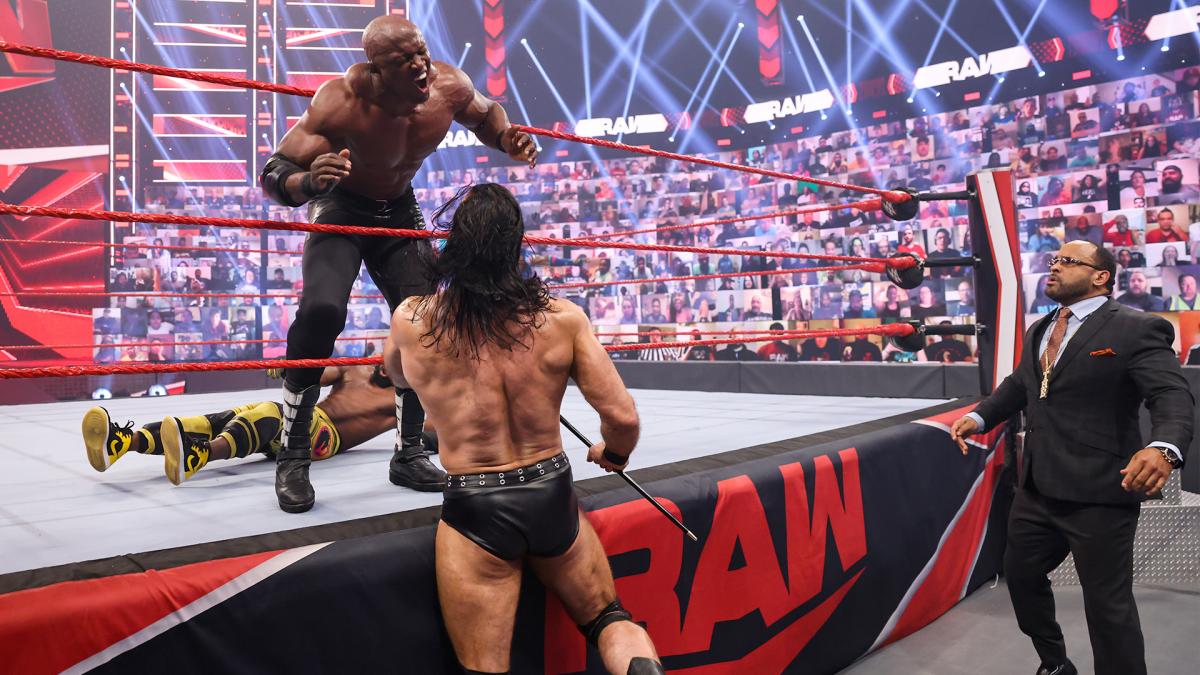 Monday Night Raw kicked off with Bobby Lashley hanging out with different women backstage so as to celebrate his victory at WrestleMania Backlash.

MVP opened the show and he called on Bobby Lashley to join him in the ring. The Almighty WWE Champion music hits and he made his way into the ring acommpanied by five gorgeous ladies.

MVP spoke about how Bobby Lashley successfully defended his Title against Braun Strowman and Drew McIntyre last night at WrestleMania Backlash. MVP also added that Lashley sustained a knuckle injury during his Title defense at WrestleMania Backlash. MVP and Lashley also made it clear to the WWE Universe that the All Mighty Era is not ending anytime soon.

MVP then offered an open challenge to everyone in the looker room that is interested in the WWE Championship on behalf Bobby Lashley. He continued his speech until he was being interupted by Drew MycIntyre.

MycIntyre heads into the ring and accepted Lashley’s challenges but MVP turned down his request and made it clear that the open challenge was meant for every other wrestler in the locker room except Braun Strowman and Drew MycIntyre.

The Scottish Warrior became furious and attacked Lashley with a punch in the face then MVP held Lashley backward and prevented him from clashing with MycIntyre.

The match kicked off and Jaxson and Omos watched from the ringside.

AJ Styles hits Elias with a dropkick as the match kicks off but Elias fired up and connected him with a suplex. Elias took Styles to the ring corner and capitalized attack on his midsection.

Back from the commercial break, the match continued in the ring and Elias took control by hitting Styles with a high back body drop and spinebuster, then he covered him for 2 counts. Styles fired up and delivered a kick and forearm to Elias.

Elias tried to ignite but Styles put him down with a neckbreaker and covered him for 2 counts. Elias got back to his feet and hit Styles with a knee drop and suplex then pinned him for 2 counts. Styles recovered and was about to deliver the phenomenal forearm but Jaxson pulled him down from the apron and the match got cancelled.

Riddle was seen with Kofi Kingston and Xavier Wood backstage and he apologised to The New Day for what Randy Orton did to them last week on Raw. Randy Orton joined them later in their conversation and the Viper was there because Ridle told him Adam Pearce wanted to see them for an important discussion.

Riddle apologised to Orton for stretching the truth too far and he revealed that he has called Randy here to apologise to the New Day for hitting them with an RKO last week on Raw. Randy was reluctant and he refused to apologise. Kofi became angry and he challenged Randy to a match on Raw then the challenge was accepted.

Drew Gulak took control of the match and he brutally unleashed his fury on Garza. Garza fired and hit Gulak with a dropkick, right hand punch and backbreaker.

Garza then hit Gulak with a kick to the ring corner and finally connected him with his finisher move to win the match.

Angel Garza took the rose in the ring and inserted it directly to Gulak’s mouth to celebrate his victory.

Kevin Patrick met with R-Truth backstage and asked him what he felt about Bobby Lashley issuing out an open challenge for the WWE Championship. R-Truth was scared at first as he thought that the open challenge was about his 24/7 Championship. R-Truth was about to answer Kevin Patrick question then Akira Tozawa came from behind with a referee and successfully take the Title from R-Truth after pinning hin for the 3 counts.

The match kicked off and Kofi sent Randy out of the ring with a hip attack. Their brawl continued in the ring and Kofi took control of the match. Kofi hits Randy with a splash from the apron and covered him for 2 counts.

Randy fired up and started fighting back by repeatedly hitting Kofi with an uppercut to the ring corner. Kofi eventually recovered and connected Randy with a dropkick from the toprope. Randy captured him again with the powerslam and was ready to deliver the RKO.

Xavier distracted Randy wit the trumpet and made him lost the match against Kofi as he got rolled up and pinned for the 3 counts.

Naomi & Lana, Mandy Rose & Dana Brooke were seen backstage with Adam Pearce and Sonya Deville and they all wanted the Women’s Tag Team Championship shot. Charlotte joined them thereafter and Sonya instructed the rest of the women to excuse them as Charlotte got some private important matter to discuss with her.

Charlotte demanded a one-on-one match against Rhea Ripley for the Raw Women’s Championship but she was asked for the reasons she thinks that deserves that kind of opportunity. Charlotte made it clear that she wasn’t pinned at WrestleMania Backclash and that technically means that she didn’t lose.

Adam Pearce and Sonya Deville then said that if she defeats Asuka tonight on Raw then she would be given the opportunity to have a single match against Rhea Ripley.

Rhea Ripley joined them and revealed that she is fully ready for new competitions. She then mocked Charlotte that she is nothing but yesterday’s news. Charlotte then vowed that she would beat Ripley and take the Raw Women’s Title from her whenever they square off in a single match.

Natalya finally fired up and tagged Tamina into the ring, then the brawl continued with Tamina and Bazsler in the ring. The match became more intense with huge momentum and Reginald was about to cause a distraction but his plan was ruined with a firework from the steel post. Natalya and Tamina hits Bazsler with their finisher move and pinned her for the 3 counts.

The match kicked off in the ring and Richochet hits Sheamus with multiple dropkicks at first but Sheamus fired up and started decimating Richochet. Sheamus brutally tortured him and broke his body at the ringside as the show goes on a commercial break.

Back from the commercial break, Sheamus toprope to attack Richochet but he was repelled. Richochet smashed Sheamus on the floor and continued to decimate him with incredible athletic move. Richochet took Sheamus down and delivered a high dive on him. The match finally ended as Sheamus hit him with the Brougue kick to secure the victory.

After the match ended, Sheamus made an announcement that Lashley should keep an eye on him as he would be coming for the WWE Championship.

The match kicked off and Asuka shoved Charlotte out of the ring. Charlotte hits the ring and started controlling the match untill Rhea Ripley music hits the air and she joined the annouce team as the show goes on a commercial break.

Back from the commercial break, Asuka finally fired up and attempted to pin Charlotte for the 3 counts but she was repelled. Charlotte then hits her with a neckbreaker and covered her for 2 counts.

Their brawl was a very hot one and both women are fully aware of their skills in the ring thereby making it extremely difficult to triumph over themselves. The match came to an end when Asuka rolled Charlotte up and pinned her for the 3 counts when Rhea Ripley caused a distraction.

Johnny drip drip took control of the match but he was later overpowered by Priest and their brawl continues inside the ring untill the show goes on a commercial break.

Back from the commercial break, Priest locked Morrison’s head with his submission move but Morisson repelled him and hit him with a kick. Priest continued to take control of the match until he hits Jonny drip drip with Hit-the-Lights to stand tall as the winner of the match.

When the match was about to start, MVP interupted and denied that he never said anything about WWE Championship attached to the open challenge he offered to the wrestlers in the locker room.

The match kicked off and Lashley lifted Kofi and smashed him on the floor. Kofi recovered and started fighting back with multiple dropkicks, he also delivered a high dive on Lashley outside the ring as the show goes on a commercial break.

Back from the commercial break, Lashley was seen decimating and punishing Kofi. Kofi fought back with a massive DDT on Lashley. Lashley fired up and hit him with a faceforce.

Lashley dragged Kofi to the apron and instructed MVP to hit him with his staf when the referee was distracted. Drew MycIntyre came from behind and grabbed the stab from MVP and hit Lashley with it then Kofi quickly rolled him and pinned him for the 3 counts to end the show.