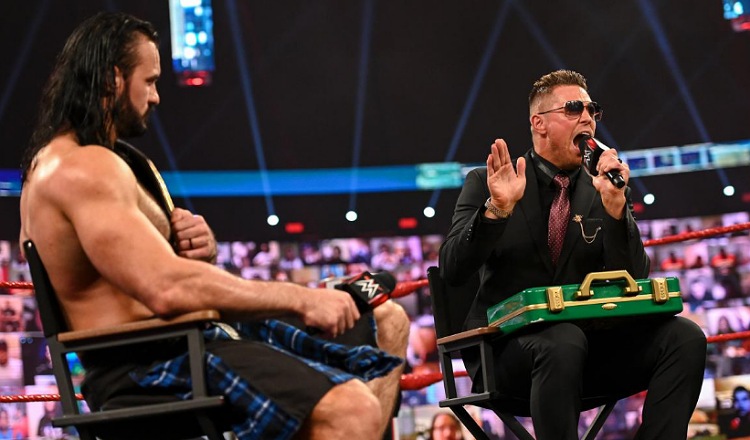 Tonight is the final Monday Night Raw before Elimination Chamber and it will kick off by 8/7c on USA Network inside the WWE Thunderdome.
On tonight Monday Night raw:

The Mr Money in the Bank “The Miz” kicked off the show and he makes his way into the ring as the show begins with MizTV. He welcomed McIntyre into the show as the guest and they both sat down to run the MizTV show. The Miz apologized to the WWE universe for Morrison’s absence on the show, stating that he is currently with a producer just to make music with Bad Bunny. The Miz asked Drew McIntyre about how is so focused on his WWE title defense this Sunday. He also talked about how Sheamus turned his back on McIntyre by hitting him with a brougue kick just to get a title shot against him.

Drew McIntyre shouted at The Miz to shut his mouth that he has had enough of The Miz running his mouth on the show. He warned The Miz not to mention any word again or else he would regret it. The Miz didn’t stop talking and this made the Scottish to head boot him and throw his Money in the Bank briefcase out of the ring.

The Miz stood up after Drew MycIntre left the ring and threatened to cash in his money in the Bank contract into any Championship match and walk out as the champion. The Miz also claimed to be the only master strategist in the company. He, however, made a shocking announcement that he will not be joining the Elimination chamber match this Sunday for the WWE championship.

The match begins with Benjamin and Lince Dorado. The Hurts Business start controlling the match early while dishing out punishment to Lince Dorado. The Lucha House Party tried to fire up and dominate the match but they were all shoved out of the ring and decimated including Riddle as the show goes on commercial break.

Back from the commercial break, the match continues and the Hurts Business are still controlling the match. The momentum of the match changed when Metalik hits Benjamin with a DDT and tapped Riddle to come into the ring. Riddle became fired up and started decimating every member of the Hurts Business in the ring. The whole 6 men entered into the ring and started competing for victory. The struggle for the win continues until Riddle connected MVP with a knee to the face and hit him with the folding blow from the top rope for the 1-2-3 counts.
Riddle & The Lucha House Party def. MVP, Cedric Alexander and Benjamin (The Hurts Business) via pinfall.

Backstage Damian Priest was being interviewed alongside with Bad Bunny and he talked about his incredible Royal Rumble performance and RAW in-ring debut that has left him hanging out with one of the biggest star on the planet “Bad Bunny”.

Shortly after his statement, Akira Tozawa was seen pinning R-Truth and capturing the 24/7 Championship from him which eventually interrupted Bad Bunny and Damian Priest interview. Damian Priest then dragged Tozawa, hit him on a steel storage case and Tozawa fell to the ground. Bad Bunny immediately pinned him and emerged as the New 24/7 Champion.

Kofi Kingston Vs The Miz

The match begins with a fascinating display of athleticism and both wrestlers are building of tough momentum in the ring. Kofi starts controlling the match by constantly hitting The Miz on the face and dishing out several punishment on him both in the ring and outside the ring. The Miz fired up and started fighting back, he connected Kofi with a destructive neck attack around the ring rope and on the floor outside the ring leaving Kofi in an agony of pain as the show goes on commercial break.

Back from the commercial break, The Miz continues to dominate the match and he delivered a massive DDT to Kofi and pinned him for the 2 counts. Kofi got fired up to fight back but he was taken down by The Miz with a kick and pinned for two and half counts. Kofi finally got fired up and started fighting back, he unleashed his fury on The Miz and continued to take him down. The struggle for the victory continues untill Kofi finally delivered the Trouble in Paradise kick to The Miz and successfully pinned him for the 3 counts.
Kofi def. The Miz by pinfall and he will be added to the Elimination Chamber Match for the WWE Championship this Sunday.

The match begins as Naomi and Nia Jax are watching from the ring side. Shanya Baszler took control of the match and started capitalising attack on the arm of Lana. Lana tried to fight back but she was overpowered with a massive clothesline from Baszler. The match continues and Nia Jax was seen attacking Naomi at the ringside but Naomi fought back and hit her on the ring pole.

Baszler grapped Naomi head around the ring rope to hit her but Lana quickly took advantage of the distraction and pinned Baszler from behind for the 2 counts. Baszler hits Lana with a kick on the chest after kicking out of the 2 counts and locked her with the Coquina Clutch to secure the victory.
Shayna Baszler def. Lana Via summision.

AJ styles mocked Kofi Kingston and wondered if Kofi is trying to recreate KofiMania or KofiMania 2. He threatened to destroy Kofi’s hope of becoming the WWE Champion again. He continued to boast that he will go through all the wrestlers at Elimination Chamber, decimate them and emmerged as WWE champion. He, however, threatens that Kofi will bear a little consequence tonight of what his destructive action will be at Elimination Chamber.

The match begins and AJ styles took control of the match but he was overpowered by constant head boots and other attacks from Kofi. Kofi charged up and shoved AJ styles out of the ring which made Xavier wood excited and he begins to play the trumpet in jubilation to Kofi’s amazing performance. Omos angrily approached him, grabbed him by the neck and choked slam him on the barricades. This caused a chaotic drama and the referee sent Omos out of the ring side as the show goes on commercial break.

AJ Styles fired up and connected Drew McIntyre with 2 drop kicks to shove him out of the ring. He delivered the phenomenal forearm to MycIntre outside the ring and also hit him with the knee strike. They head back into the ring and Drew McIntyre fired up and connected styles with a belly-to-belly suplex but he was overpowered again by AJ styles. AJ styles locked MycIntre leg with his submission move but McIntyre head boot him to break the submission and delivered the claymore to him and secured the victory.
Drew McIntyre eliminates AJ Styles

Next is Jeff Hardy

Jeff Hardy music plays and he walks into the ring and started inflicting painful punishment on Drew McIntyre as the show goes on commercial break.

Back from the commercial break, Jeff Hardy continues to control the match while decimating MycIntre with multiple attacks. The struggle for the win continues untill MycIntre hit Jeff with superplex from the top rope and connected him with the claymore kick for the 1-2-3 counts.
Drew McIntyre eliminates Jeff Hardy

The next is Randy Orton

The match begins and the rivalry between Drew McIntyre and Randy Orton was taken to the peak. They fought out of the ring and continued their brawl around the ring side. Drew McIntyre overpowered Randy Orton, hits him on the barricades and walks back into the ring as the referee begins the count out.

Randy Orton was distracted by Alexa bliss’s display of charisma until the referee completed the 10-count and he was automatically eliminated. Randy Orton tried to run into the ring after the count out but he was taken out with a claymore kick from MycIntre.
Drew MycIntre eliminates Randy Orton

Sheamus music hits the air and he attacked MycIntre from behind before the match officially started. The match eventually started and Sheamus began to unleash furry on Drew McIntyre. He decimated MycIntre with several attacks and left him drained.

MycIntre fired up and hit Sheamus with a DDT, he shoved Sheamus out of the ring and continued to punish him there. The struggle for the win continued and ended as Sheamus hits MycIntre with a massive brogue kick to secure the win.
Sheamus eliminates Drew MycIntre to win the Gauntlet Match

Therefore, Sheamus will be the last man to join the Elimination Chamber match for the WWE championship this sunday.