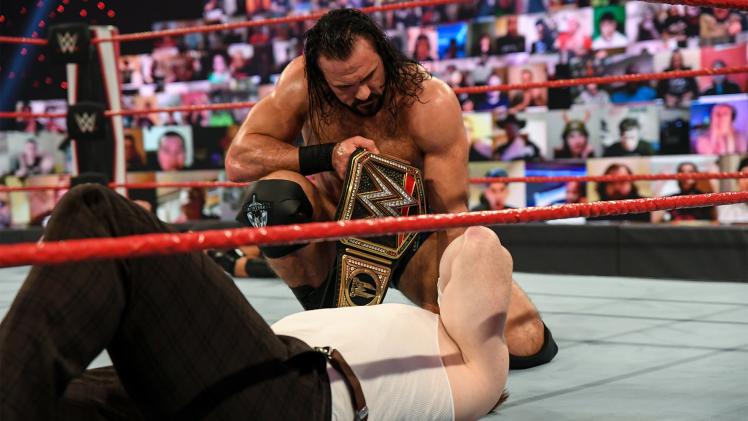 Adam Pearce kicked off the show and welcome Shane Oman into RAW inside the WWE thunderdome.

Shane Oman music hits the air and the entire WWE universe cheered him up as he made his way into the ring. He made a special announcement that the WWE champion Drew McIntyre will defend his title against five other wrestlers inside the elimination chamber. Shane Oman made it clear in his statement that the 5 wrestler that will be competing with the MycIntre in the chamber are also former WWE champions. Their names include Randy Orton, AJ styles, The Miz, Jeff Hardy and Sheamus. After he made the announcement his music was played again and he walked out of the ring and met AJ styles and Thomos on his way out.

AJ styles music plays and he made his entrance into the ring accompanied by his body guard Omos. He talked about Drew McIntyre defending his title against 5 other superstars inside the elimination chamber. AJ Styles maintained that the WWE tittle match at elimination chamber will be an incredible opportunity for him to become a WWE champion once more. He continued his speech until Jeff Hardy interrupted him.

The match begins and AJ Styles started controlling it but Jeff Hardy backfired and started punishing Styles. He tried to pin Styles on several occasions but his forces were not enough to take Styles down as he was continuously kicking out of 2 counts. The match continues and Jeff Hardy sustained an injury on his left leg while trying to attack AJ style and this is when Styles started capitalising the attack.

Back from commercial break, AJ Styles continued to assault, victimize and inflict more painful punishment on Jeff. Styles connected the injured leg of Jeff with his submission move but Jeff never tapped out. AJ Styles top rope and wanted to hit Jeff with the phenomenal forearm but Jeff pulled the rope and left AJ Styles was hurt so bad. Jeff got fired up and fought back but he was eventually over powered by Styles. The battle for victory continues untill AJ Styles connected Jeff with the calf crusher on his injured leg to pick the win
AJ Styles def. Jeff Hardy via pinfall

The tag team match started with SlapJack and Xavier Wood building up momentum in the ring while Mustafa Alli and a member of the retribution were at the comment section watching the match. The match starts and ‘The New Day were taking control of the match, driving ‘The Retribution out of the ring and high diving them as the show goes on commercial break.

Back from commercial break, the match continues and Tbar and SlapJack were beating and punishing Xavier Wood. Xavier tried to fire up and tap Kofi but he was taken down with a destructive clothesline as the punishment on him continues. Xavier finally tapped Kofi and Kofi unleashed the furry in him on the retribution as he continues to dominate the match. The struggle for victory between these two teams continued until Xavier wood and Kofi Kingston hit slapjack with the day breaks for the 1, 2, 3 counts.
Xavier Wood & Kofi Kingston (The New Day) def. Tbar & Slapjack (The Retribution)

Lavey Evans started her speech by giving credit to ”The nature boy'”. She said she has a lot of respect and accolades for Rick Flair. She added that she will continue to acknowledge Rick Flair as a true WWE legend and will forever be grateful to him. She said Charlotte is a fool for not being grateful to his dad and disrespecting him.

Charlotte music plays and she made her way into the ring to address the situation. She said if Lacey Evans wants to be a better competitor she should go to the WWE performance center instead of using her dad. She accused Lacey Evans of using her dad and trying to take her position. Ric Flair tried to persuade Charlotte to be Lacey’s tag team partner but she turned down the offer. Charlotte however, challenged Lacey to a match in a bid to get a championship opportunity match against Asuka and Lacey accepted the challenge. Lacey Evans attacked Charlotte with a punch right on her face and drive her through the steel step as the show goes on commercial break.

The match begins and Lacey Evans was taking control while capitalising attack on the left shoulder of Charlotte. Charlotte got fired up and started fighting back, she connected Lacey with suplex and Lacey rolled out of the ring. Charlotte tried to high dive Lacey Evans outside the ring but she was distracted when Lacey used Rick Flair as a shield and this paved a way for Lacey to attack Charlotte again and continued the assaults on her as the show goes on commercial break.

Back from commercials, Lacey continued to capitalise more attack on the injured left arm of Charlotte. Charlotte charged up and started punishing Lacey as she rolls out of the ring. Charlotte went out of the ring to continue to punish Lacey but she was distracted by Ric Flair. The match continues and Charlotte speared Lacey in the ring and took their rivalry to the extreme after viciously attacking Lacey and declining referee count out until the match was cancelled.
Lacey Evans def. Charlotte via disqualification

Bad Bunny, The Miz and John Morrison are standing at the ringside to watch the match.
The match begins and Priest was dominating the match. Angel Gaza however, fought back and attacked Priest by the aid of the distractions caused by The Miz and Morrison. The match continues and both wrestlers are building up incredible momentum in the ring. The Miz and Morrison continued their distractions and assaults on Priest when he was driven out of the ring by Garza.

Bad bunny took the money in the bank briefcase and hit it on the steel step, this was when he was chased by Morrison and he threw the briefcase into the ring. Morrison entered into the ring to pick up the briefcase and he was caught by the referee. This was the moment the referee finally barred The Miz and Morrison from the ringside as the match continues. Priest took control of the match and hit Garza with the reckoning to pick the win.
Damian Priest def. Angel Gaza via pinfall

The match begins and Riddle locked the left arm of Keith Lee but Keith broke the summision and their brawl continues. Keith Lee started controlling the match with massive and explosive attack on Riddle.

Riddle got fired up, started fighting back and capitalized more dangerous attack on Keith to pick the win but Keith Lee resisted him. Keith Lee eventually backfired and hit Riddle with the explosive spirit bomb and pinned him for the 1-2-3 counts.
Keith Lee def. Matt Riddle

Lana music kicks off and she was accompanied to the ring by Naomi
The match kicked off and Nai Jax was controlling the match with vicious attack and victimisation on Lana. Nia Jax continued to punished Lana with destructive attack, she tried to throw Lana over the rope and through the table but she resisted. Lana got fired up and started fighting back but she was overpowered by Nia Jax.

Shortly after the match Shanya Bazler came from behind to attack Lana but she was overpowered and taken out by Naomi.

The match begins and both wrestlers were performing incredible in-ring actions. Naomi started controlling the match and constantly overpowering Baszler. Baszler fired up , beat down Naomi and went out of the ring for Lana. She attacked Lana and drive her through the barricade. The match turned out to be favour of Naomi when Baszler was making her entrance into the ring and Naomi skillfully pinned her to secure the victory
Naomi def. Shanya Baszler via pinfall

The match starts and the two wrestlers are getting fired up and battling for the victory. Sheamus music hits the air and he came to distract MycIntre, this was when Randy started to gain momentum and dominate the match while punishing Mycintre. He drived MycIntre out of the ring and hit him with the spinebuster on the announce table.

The match continues inside the ring and McIntyre got charged up and started controlling the match. He connected Viper with superplex from the top rope and both wrestlers are down. The struggle for victory continues and Sheamus finally interfere in the match by delivering a brogue kick to Randy Orton. Drew Mycintre got vengeance this time and hit Sheamus with the claymore kick to stood tall as the man of the match.
The match ended in no contest