Everything that has been announced for tonight’s SmackDown (April 30) 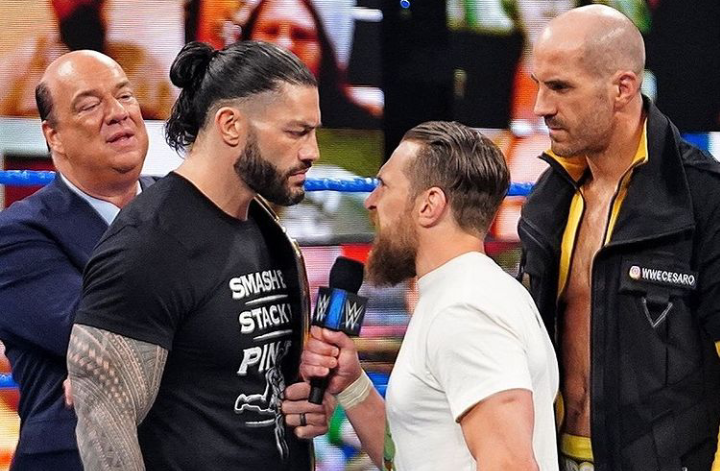 Today’s edition of Friday Night SmackDown will kick off at exactly 8/7 C inside the WWE thunderdome at USF’s Yuengling Centre in Tampa Florida.

SmackDown tonight is made up of two Championship matches and other highly anticipated matches to make the show a fabulous one.

1. Big E will battle Apollo Crews for the Intercontinental Championship

Apollo Crews captured the Intercontinental Championship from Big E with the help of Commander Azeez at the Grandest Stage of Them All in a Nigerian Drum Fight. Big E appeared on SmackDown last week to demand a rematch from Apollo but Kelvin Owens was an obstacle for him then Big E ended up launching a visious attack on Apollo before he left SmackDown.

Therefore tonight on SmackDown, Apollo Crew will defend the Intercontinental Championship against Big E in a single match.

2. Roman Reigns and Daniel Bryan will clash for the Universal Championship

On the main event of tonight’s SmackDown, The Head of the Table will defend the Universal Championship against The Leader of the Yes Movement in a one on one match.

Last week on SmackDown, Cesaro and Daniel Bryan called out Roman Reigns to give an answer to his Title challenge from Cesaro then Roman Reigns came out and surprisingly offered Bryan the Universal Championship opportunity match.

The Big Dig said that if Daniel Bryan loses then he would be banished from SmackDown and Bryan accepted the challenge.

The main event of SmackDown tonight may be the biggest in the history of WWE as Roman Reigns Title defense against Bryan will be a total chaotic match. Jey Uso may likely come and intervene in the match but Bryan has also gotten Cesaro at his back. Therefore the match tonight is going to be “Survival of the fittest”.

WrestlingGist will continue to bring you more News and Updates for SmackDown as they are officially announced by WWE.