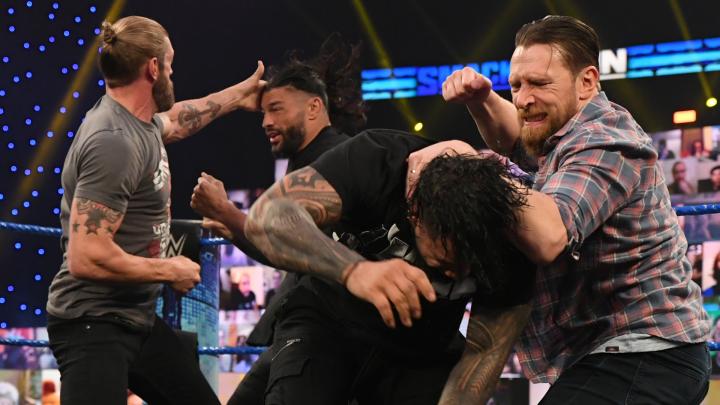 The Blue Brand is becoming hotter and hotter, week by week due to series of fascinating matches and the struggle for dominance and supremacy among the WWE superstars in the SmackDown roster.

The following are the confirmed match card by WWE for this week friday night SmackDown as well as other events that will feature in the show:

The winner of the 2021 Royal Rumble ‘Edge’ will be going one-on-one with Jey Uso this week on SmackDown and the winner of the match will be the special enforcer for the WWE Fastlane pay-per-view event.

Edge has been out of in-ring action since he defeated Randy Orton on the RAW following Royal Rumble so as to carefully and judiciously make his decision as regard his main event oponent at WrestleMania.

He eventually finalized his decision at Elimination Chamber and chose Roman Reigns as his opponent for the Universal Championship match at the main event of WrestleMania but things are not going as he expected because Daniel Bryan has gotten into his business.

During the Universal Championship match contract signing between Roman Reigns and Daniel Bryan last week on SmackDown, Edge appeared and challenged Jey Uso to a match with the condition that the winner will be the special enforcer at WWE fastlane, then Adam Pearce made it official. The contract signing eventually ended in brawl as Edge and Daniel Bryan take on Roman Reigns and Jey Uso to end the show.

The RAW Women’s Champion ‘Sasha Banks’ will defend her title against Nia Jax this week on friday night SmackDown.

Reginald increased the beef and hatred between Sasha Banks, Bianca Belair and the Women’s Tag Team Champions ‘Nia Jax and Shanya Baszler’ last week on SmackDown when he bonded with Nia Jax and ruined Bianca’s match which also resulted in Sasha Banks being attacked and asualted by Nia Jax.

Therefore, before Sasha banks and Bianca Belair will face Nia Jax and Shanya Baszler for their titles at Fastlane, Sasha banks will defend the SmackDown Women’s Championship against Nia Jax this week on SmackDown.

WrestlingGist will continue to bring you more fresh updates about all the matches that will be announced for this week SmackDown.

Do not miss out this week friday night SmackDown on Fox at exactly 8/7C inside the WWE thunderdome at Tropicana field.