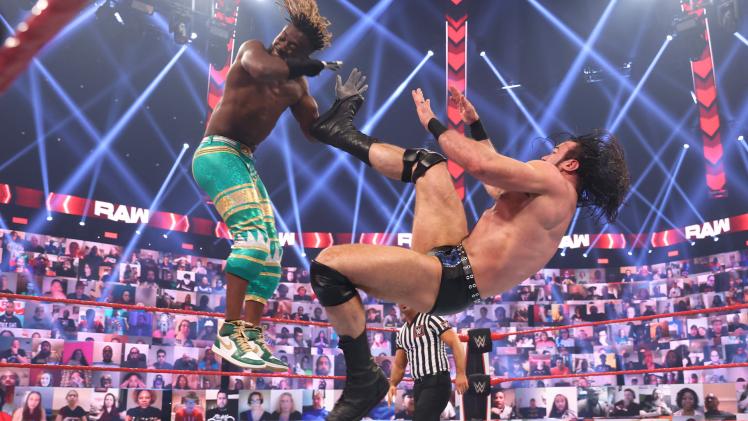 The Scottish Warrior has taken another impressive step to regaining the WWE Championship by single handedly decimating and defeating Kofi Kingston last night on RAW to earn the WWE Title match against Bobby Lashley at Hell in a Cell.

MycIntyre and Kofi then met with Adam Pearce backstage and complained about how Lashley and MVP ruined their match. Adam Pearce, however, assured them that their rematch would happen on the following RAW and threatened that Bobby Lashley will get suspended without pay if he ruins the match again.

Watch the match below:

?????@TrueKofi is pulling out ALL the stops against @DMcIntyreWWE with a #WWEChampionship opportunity at #HIAC on the line! #WWERaw pic.twitter.com/KxksKVUCgq

The rematch eventually happened last night on the main event of RAW and it was a very intense match. Kofi shocked the whole WWE Universe with his outstanding athletic performance. He hits MycIntyre with the Trouble in Paradise but the Scottish Warrior survived it. The match came to an end when MycIntyre connected Kofi with the Claymore and successfully pinned him for the 1-2-3 counts.

MycIntyre’s victory over Kofi Kingston has earned him the opportunity to face Bobby Lashley for the WWE Championship at Hell in a Cell and the event will come up on the 20th of this month.

Do not miss out Hell in the Cell as it kicks off in 3 weeks time inside the WWE thunderdome at exactly 8pm. Hell in the Cell will be available for live streaming on Peacock within the United States and WWE Network everywhere else.