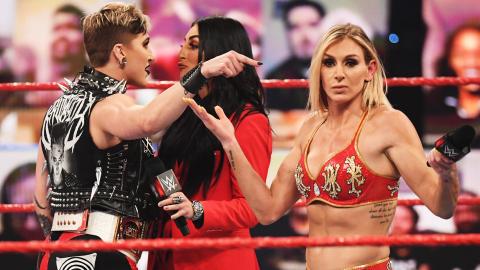 Last night on Raw, a lot of chaotic drama broke out as Sonya Denville made a shocking revelation by adding Charlotte Flair to the Raw Women’s championship match scheduled to take place at WrestleMania Backlash.

Sonya Denville hits the ring last night on Raw after Charlotte’s match against Dana Brooke. Sonya Denville then told Charlotte to make a proposal about the Raw Women’s Championship match at WrestleMania Backslash.

Charlotte made it known to the WWE Universe that she placed Sonya Denville into the post of the authority. The Queen also bragged about being the most famous influencer in the whole women’s division that others follow. Charlotte reminded Sonya that she was the one that ended Asuka winning streak and that she also adds huge relevance to the women’s division.

Do you think Charlotte flair will fulfill her obligation and win the Raw Women’s Championship at WrestleMania backlash? Find out more as WrestleMania Backlash kicks off on May 16 by 7p.m ET inside the WWE thunderdome.

WrestleMania Backlash will be available for Live streaming on Peacock TV if you are within the United States and WWE Network elsewhere.