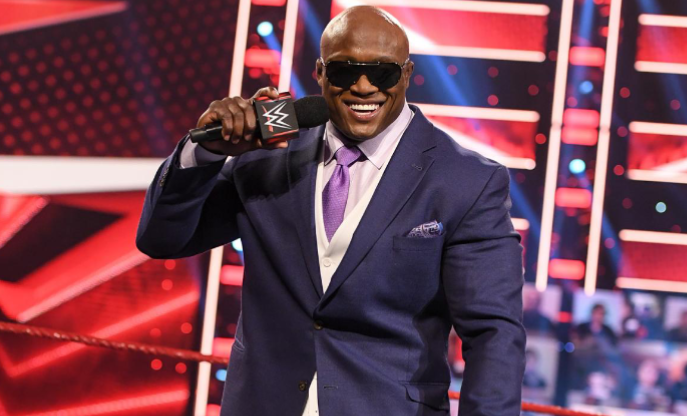 The All Mighty WWE Champion ‘Bobby Lashley’ has spoken his mind about his Championship defense against Drew MycIntyre and Braun Strowman at WrestleMania Backlash.

Kevin Patrick hosted the Raw Talk after Monday Night Raw went off the air and he had MVP and Bobby Lashley as his guest. Kelvin Patrick then asked Bobby lashley how he felt about his Championship defense in a Triple Threat Match against MycIntyre and Strowman at WrestleMania Backlash.

Bobby Lashley replied Patrick by saying that he had beaten both Braun Strowman and MycIntyre in a single match in the past and defeating them at WrestleMania Backlash will be very easy for him.

The All Mighty WWE Champion revealed that Drew MycIntyre is a man with no focus because a little distraction on him always cost him the victory. Lashley said MVP distracted MycIntre at WrestleMania and he ended up in a hurt lock, thesame thing happened to him on RAW when T-Bar and Mace intervened in his match thereby making him to lose the match against Strowman.

WrestleMania Backlash will kick off by 7p.m ET on May16 inside the WWE thunderdome at USF’s Yuengling Centre in Tampa Florida. You can stream it live on Peacock TV if you are within the United States and WWE Network.