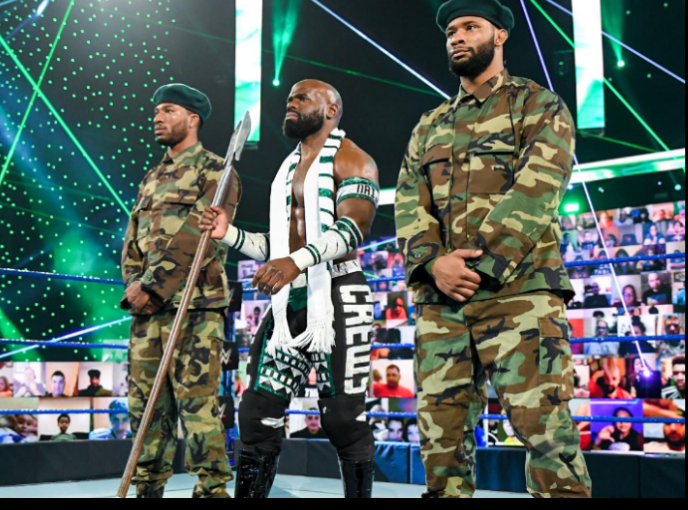 The new Apollo Crews has made his ambition disclosed to the whole WWE universe as he demands for the Intercontinental title match from Big E on the last episode of friday night SmackDown.

Apollo Crew turned a new leaf in his character and accent with WWE when he embraced his origin as a descendant of Nigerian royalty and an African American. Last 3 weeks on SmackDown, Apollo Crew unleashed his fury on Biggie using a steel step as a weapon to decimate him and when he returned to SmackDown the following week he said that he had been humbled, good and respectful to people in the company but he had not been well credited for it and that he can no longer take it.

Apollo Crews in his statement said “My grandfather has taught me that when the enemy strikes then you use the steel”. He then concluded that, this was the reason he brutally attacked Big E and that he would continue to destroy whoever that crosses his path or disrespects him.

Last week on SmackDown, Apollo Crews appeared in the ring with two men dressed in camouflage outfit and he said a lot about where he originated from. Apollo talked about being a proud citizen of Nigeria and embracing the new vision. He said he had tried to fit in with others but they have never accepted him for who he was. Apollo added that his ancestors in Nigeria were one of the most powerful warriors and it would be absurd if anyone tries to disrespect them or bring up a fight against them.

Apollo Crews said that Big E has tried to humble, conquer and disrespect him but he won’t succeed in it. Apollo Crews, however, concluded that he is no longer the man that Big E used to know and that he his officially demanding for the Intercontinental title match from him.

Do not miss next week friday night SmackDown which will kick off by 8/7C on Fox inside the WWE Thunderdome.