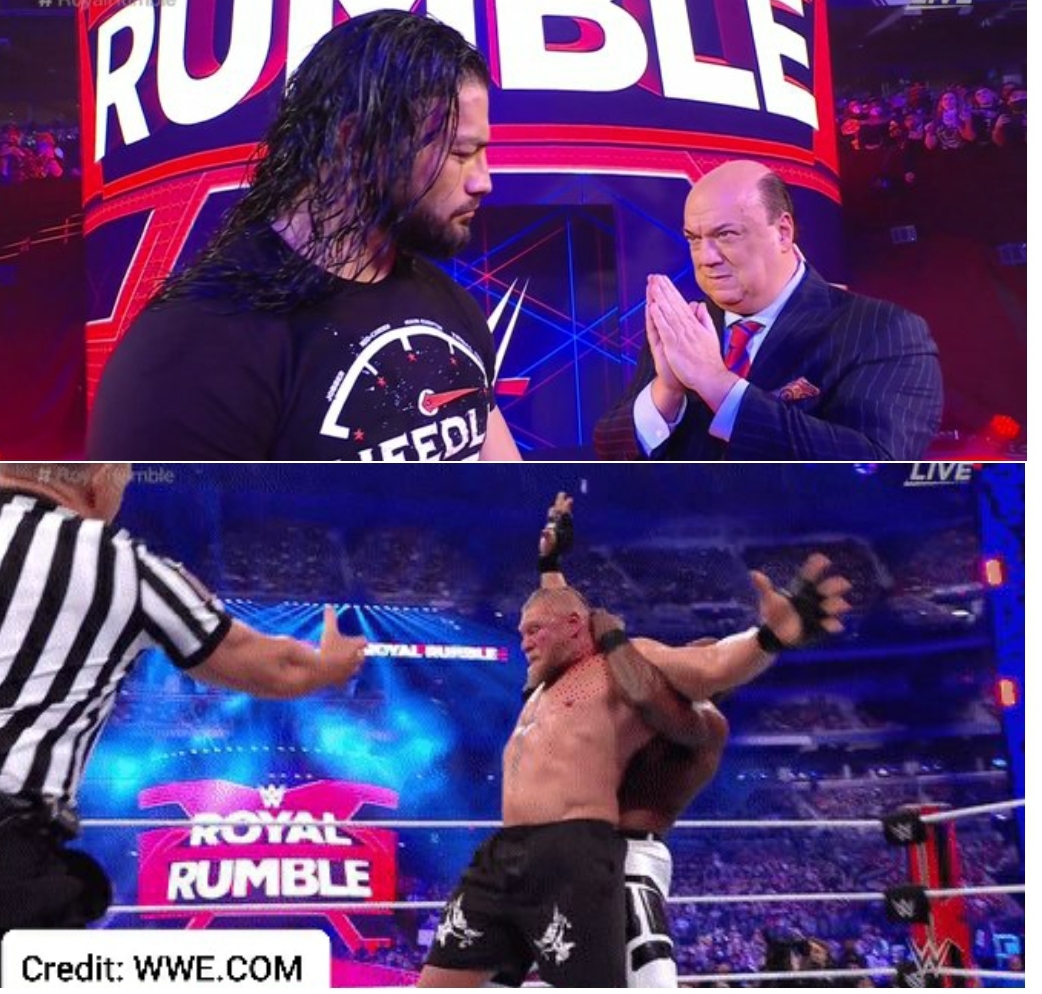 Roman Reigns was the first to hit the ring, but Rollins entrant was a big surprise to the WWE Universe as he came into the ring from the crowd with Roman Reigns’s former theme song and he was also dressed in The Shield gear.

Rollins took control of the match at the early moment and wrecked reigns with 2 suicide dive to the barricade after driving him out of the ring. Reigns got him with an uppercut followed by drive-by to fight back. Rollins recovered quickly and powerbombed Reigns through the announce table, Reigns got back to the ring and Rollins top up his attack with a frog splash from the toprope and pinned Reigns for 2 count.

SHIELD BOMB THROUGH THE TABLE. 😱@WWERollins' mind games are next level so far in his #UniversalTitle clash against @WWERomanReigns! #RoyalRumble pic.twitter.com/nbXm0vKunx

The brawl continues and Rollins took charge and hit Reigns with a buckle bumb followed by a stomp and covered the Tribal Chief for 2 and half counts. Rollins attempted another stomp but Reigns countered it with a clothesline. Roman Reigns powerbombed Rollins to the middle of the ring and pinned him for 2 counts. Rollins ignited and held Reigns with his submission move but Reigns broke it with a powerbomb. Reigns sent Rollins through the steel post and continued to capitalise more punishment on him outside the ring.

More momentum were built up in the match, Reigns then hit Rollins with a superman punch and covered him for 2 counts. The Tribal Cheif also speared the Drip Lord at the ringside. Reigns attempted another spear on Rollins inside the ring but the Drip lord countered it with a Pedegree and covered Reigns for two and half counts.

Reigns fired up and speared Rollins. But the Tribal Cheif was left astonished seeing Rollins laughing in the ring instead of groaning in pains. Reigns then held him with the Guilotine but Rollins never tapped out. Rollins held the rope but Reigns never let him go and this triggered the referee to cancel the match.
Seth Rollins def. Roman Reigns via Disqualification, but Roman Reigns remains the Universal Champion.

After the whole match Reigns grabbed a steel chair from the ringside and decimated Rollins before heading out of the arena.

Stream #RoyalRumble LIVE exclusively on @peacockTV in the U.S. and @WWENetwork everywhere else! pic.twitter.com/iKOGlPO83o

Charlotte eliminates Naomi with a support from Sonya Deville at the ringside. Rhea Ripley elimates Ivory. The elimination continues then Nicki music hits the air and she came in as the 24th competitor. The Bella Twins eliminates Sarah Logan and Liv Morgan. Lita drove Mickie James out of the ring after wrecking her with a DDT. Nicki A.S.H eliminates Molly. Ronda Rousey eliminates Nicki A.S.H. Nicki Bella eliminates her sister Brie Bella, then Ronda elimantes Nicki thereafter.

Shayna Bazler came in as the last competitor as the match continues. Ronda continues her elimination game and got Shotzi out of the ring, Natalya then was eliminated. Charlotte eliminates Rhea Ripley, Shayna Bazler and Bianca Beliar, thereby leaving her and Ronda Rousey in the ring for the final fight. Ronda then finally made a history as she single handedly threw Charlotte over the toprope to stand tall as the winner of the 2022 Woman Royal Rumble Match.
Ronda Rousey wins the 2022 Woman Royal Rumble Match

Doudrop took control of the match as the it begins, and she inflicted painful punishment on Becky both in the ring and at the ringside. Becky recovered and started fighting back when Doudrop crashed through the steel step while trying to attack The Man. The brawl continues inside the ring, then Becky held her with the headlock, but Doudrop survived it. Becky hits her with a dropkick from the toprope and Doudrop kicked out of 1 count.

Becky continues to dominate the match and held Doudrop with her submission move, but Doudrop broke it with a powerbomb and covered Becky for 2 counts. She crushed Becky into the ring corner and pinned her for another 2 counts. Becky started fighting back, but she was overpowered by Doudrop. Doudrop then hits Becky with her signature move and covered her for 2 counts. The match came to an end as Becky finally hits Doudrop with a slam from the middle rope and successfully pinned her for the 3 counts to retain her Raw Women’s Championship.
Becky Lynch def. Doudrop to retain her Raw Women’s Championship.

Brock hits Bobby with the first German Suplex, but the Almighty stood up instantly and never felt the impact. Bobby then hits Brock with a Suplex and this was a surprise to the WWE universe. This got Brock furious and the Beast Incarnate attacked Lashley with 2 Suplex. Lashley recovered and hits Lesnar with 2 massive Spear in the ring, he then attempted the third one on Lesnar at the ringside, but he ended up crashing through the baricade.

WOW. @BrockLesnar and @fightbobby were literally trading Hurt Locks and F-5s … until it took out the ref! #RoyalRumble pic.twitter.com/LGxFzfIQsu

The match continues inside the ring and Brock took Lashley on a tragic journey to the Suplex City. Lesnar attempted the F5 finisher on Lashley, but he ended up being trapped in the Hurtlock of the Almighty. Lesnar finally delivered the F5 on Lashley and the referee was hurt in the process, thereby leaving no one to make the count.

Roman Reigns suddenly appeared from nowhere and attacked Lesnar with a Spear. He then collected the WWE Championship from Paul Heyman and hit it on Lesnar’s head. Brock was lying helplessly in the ring until Lashley pinned him, then another referee hits the ring and made the 3 counts. Bobby Lashley won the match and Paul Heyman accompanied Reigns out of the arena which literally that they are back together again.
Bobby Lashley def. Brock Lesnar via pinfall to become the New WWE Champion

AJ Style opens the match and he eliminated Shinsuke Nakamura, then Sami Zayn got eliminated thereafter. Omos eliminates Dawkins & Montex Ford (The Street Profits) and Damian Priest until everyone in the ring conspired against him and eliminated him. Happy Corbin eliminates Richochet and Dominik Mysterio.

BUNNY AND THE BEAST.@BrockLesnar just dropped @sanbenito with an #F5 and went on an absolute rampage! #RoyalRumble pic.twitter.com/mH64a0tZ0R

The struggle for the survival continues and Shane Oman hits the ring as the nunber 28 competitor and eliminated Kevin Owens. The RK-Bro eliminate Otis, Brock Lesnar made the 29th entry and eliminated Randy Orton, Bad Bunny, Riddle and Shane Oman leaving him and Drew McIntyre in the ring. Brock Lesnar then overpowered MacIntyre and threw him over the toprope with a devastating F5 to win the 2022 Man Royal Rumble Match.
Brock Lesnar wins the 2022 Man Royal Rumble Match.